The Secret of Jahanara Begum 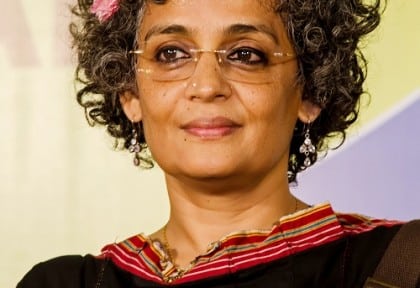 Reading Time: 5 minutesAn excerpt from ARUNDHATI ROY’s book The Ministry of Utmost Happiness
The first time she made her way past the crowd – the sellers of ittars and amulets, the custodians of pilgrims’ shoes, the cripples, the beggars, the homeless, the goats being fattened for slaughter on Eid and the knot of quiet, elderly eunuchs who had taken up residence under a tarpaulin outside the shrine – and entered the tiny red chamber, Jahanara Begum became calm.
The street sounds grew faint and seemed to come from far away. She sat in a corner with her baby asleep on her lap, watching people, Muslim as well as Hindu, come in ones and twos, and tie red threads, red bangles and chits of paper to the grille around the tomb, beseeching Sarmad to bless them. It was only after she noticed a translucent old man with dry, papery skin and a wispy beard of spun light sitting in a corner, rocking back and forth, weeping silently as though his heart was broken, that Jahanara Begum allowed her own tears to fall. This is my son, Aftab, she whispered to Hazrat Sarmad. I’ve brought him here to you. Look after him. And teach me how to love him.
Hazrat Sarmad did.


For the first few years of Aftab’s life, Jahanara Begum’s secret remained safe. While she waited for his girl-part to heal, she kept him close and was fiercely protective of him. Even after her younger son, Saqib, was born she would not allow Aftab to stray very far from her on his own. It was not seen as unusual behaviour for a woman who had waited so long and so anxiously for a son.
When Aftab was five he began to attend the Urdu-Hindi madrassa for boys in Chooriwali Gali (the bangle-seller’s lane). Within a year he could recite a good part of the Quran in Arabic, although it wasn’t clear how much of it he understood – that was true of all the other children too. Aftab was a better than average student, but even from the time he was very young it became clear that his real gift was music. He had a sweet, true singing voice and could pick up a tune after hearing it just once. His parents decided to send him to Ustad Hameed Khan, an outstanding young musician who taught Hindustani classical music to groups of children in his cramped quarters in Chandni Mahal. Little Aftab never missed a single class.

By the time he was nine he could sing a good twenty minutes of bada khayal in Raag Yaman, Durga and Bhairav and make his voice skim shyly off the flat rekhab in Raag Pooriya Dhanashree like a stone skipping over the surface of a lake. He could sing Chaiti and Thumri with the accomplishment and poise of a Lucknow courtesan. At first people were amused and even encouraging, but soon the snickering and teasing from other children began: He’s a She. He’s not a He or a She. He’s a He and a She. She He, He She Hee! Hee! Hee!
When the teasing became unbearable Aftab stopped going to his music classes. But Ustad Hameed, who doted on him, offered to teach him separately, on his own. So the music classes continued, but Aftab refused to go to school any more. By then Jahanara Begum’s hopes had more or less faded. There was no sign of healing anywhere on the horizon. She had managed to put off his circumcision for some years with a series of inventive excuses. But young Saqib was waiting in line for his, and she knew she had run out of time. Eventually she did what she had to. She mustered her courage and told her husband, breaking down and weeping with grief as well as relief that she finally had someone else to share her nightmare with.
Her husband, Mulaqat Ali, was a hakim, a doctor of herbal medicine, and a lover of Urdu and Persian poetry. All his life he had worked for the family of another hakim – Hakim Abdul Majid, who founded a popular brand of sherbet called Rooh Afza (Persian for ‘Elixir of the Soul’). Rooh Afza, made of khurfa seeds (purslane), grapes, oranges, watermelon, mint, carrots, a touch of spinach, khus khus, lotus, two kinds of lilies and a distillate of damask roses, was meant to be a tonic. But people found that two tablespoons of the sparkling ruby-coloured syrup in a glass of cold milk or even just plain water not only tasted delicious, but was also an effective defence against Delhi’s scorching summers and the strange fevers that blew in on desert winds. Soon what had started out as medicine became the most popular summer drink in the region. Rooh Afza became a prosperous enterprise and a household name.
For forty years it ruled the market, sending its produce from its headquarters in the old city as far south as Hyderabad and as far west as Afghanistan. Then came Partition. God’s carotid burst open on the new border between India and Pakistan and a million people died of hatred. Neighbours turned on each other as though they’d never known each other, never been to each other’s weddings, never sung each other’s songs. The walled city broke open. Old families fled (Muslim). New ones arrived (Hindu) and settled around the city walls. Rooh Afza had a serious setback, but soon recovered and opened a branch in Pakistan. A quarter of a century later, after the holocaust in East Pakistan, it opened another branch in the brand-new country of Bangladesh. But eventually, the Elixir of the Soul that had survived wars and the bloody birth of three new countries, was, like most things in the world, trumped by Coca-Cola.
Although Mulaqat Ali was a trusted and valued employee of Hakim Abdul Majid, the salary he earned was not enough to make ends meet. So outside his working hours he saw patients at his home. Jahanara Begum supplemented the family income with what she earned from the white cotton Gandhi caps she made and supplied in bulk to Hindu shopkeepers in Chandni Chowk.
Extracted with permission from Penguin India.
One of the most anticipated novels of 2017, The Ministry of Utmost Happiness hit the bookstands across India on 6 June. The novel comes 20 years after the author’s The God of Small Things, which won the Booker Prize in 1997 and was a bestseller in more than 30 languages worldwide.
- Advertisement -
Share
WhatsApp
Facebook
Twitter
Linkedin
Previous articleJustifying the male gaze and its violence
Next articleLearning about fasting at Ramadan