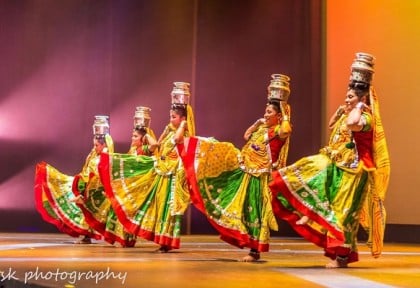 Indradhanush, a celebration of Hindi presented by the Hindi Samaj of WA (HSWA) was a hit again this year.
A unique event which ropes in talented members of the community, young and old, from different walks of life, Indradhanush showcases the fascinating diversity of Indian culture through dance, drama, music and stage performances, while celebrating Hindi as a language.

This year, Indradhanush again witnessed a packed theatre and an enthusiastic audience. The program began with the Australian and Indian national anthems, melodiously rendered by the students of Paatshala, the Hindi school in Perth, which is run by the HSWA.
The celebration was graced by Dr Mike Nahan, Treasurer, and Minister for Multicultural Interests, who was the Chief Guest of the occasion. Special guests of honour were Margaret Mary Quirk, Shadow Minister for Citizenship and Multicultural Interests, and Amit Kumar Mishra, Consul General of India in Perth.

It was impressive to hear from Vinod Agrawal, the President of HSWA, about the journey the organisation has had. From its early existence in WA with a few members, today HSWA creates opportunities for the seamless integration of Indian culture in Australian society, along with promoting Hindi and cultural exchange.
The first presentation of the evening was a Bollywood dance performance by Swati Vempati and Kooshboo Parikh called ‘Fusion’. Dressed in pretty pink and red, they gracefully danced to the tunes of some popular Hindi movie songs. This was followed by Sudha Affinwale singing In aanko ki masti ke, from the very popular movie Umrao Jaan. Her breathtaking voice was a treat for the ears. The audience was lost in a trance and drifted away into yesteryear.

The mood was immediately lifted by a colourful Rajasthnai folk dance form called Ghoomar, which was performed by the graceful students of Abhinaya School of Dance. With spectacularly coloured flowing Ghaghara, and silver pots arranged on their heads, the girls elegantly danced away to the music.
After hearing from the chief guest, guests of honour and the President of HSWA, the celebrations continued with some more fabulous performances. A group dance by Ram Mrynyal group to the recentl hit Deewani Mastaani, the Retro Remix presented by the dance performers from Xtreme Bollywood, and Kwaab, a new-age dance form presented by Manjeer Group, were of completely different styles but equally enjoyable. Each represented the amalgamation of traditional and modern dance styles in Hindi movies.

The music performance by Nazrul Islam and Shahin Choudhary from the Sur Taal Team, a beautiful medley of old songs sung by Surjopohar Mazhar, and the devotional song by Ishita Mathur, transported the audience to a different era of Hindi films.
One of the most-loved performances was by the Paatshala children who presented a skit on saving the environment. It was called Saathi Haath Badana, which means ‘friend extend your hand’. The tiny tots and big kids did their best and earned much applause. From the idea, to scripting, to casting, the skit was the brain child of Paatshala teachers and students. It was amazing to see such a relevant message conveyed through a simple performance in a very short time. Kudos to this team.
Another highlight was the Peacock Dance performance. This traditional folk dance, popular in Asian countries like China and Indonesia, was tastefully performed by the Indonesian Dance Group.

An offbeat musical skit called Kazaane Ke Pehchaan, from the Sanskrit group of HSWA, brought together the young and old in the community. This light-hearted, humorous play instantly connected with all. It brought out the idea that though things of doing things and means of expression have changed over time, the core values of humans remain the same. It was a thoughtful message expressed in a comical way.
Another mind-blowing performance was the orchestral presentation Juglabandi, a sarod and tabla recital by Praashekh Borkar and Shobhan Ahmedyar. Praashekh is a talented musician from Pune who features amongst the finest sarodists of the younger generation in India. He is an expert in playing the true Indian traditional form, but also experiments with world music. It was a delight to watch them perform and set the stage on fire.

The hosts of the evening, Pooja and Anurag did a wonderful job of keeping the audience entertained and engaged. They set the tone cheerfully, revealing the lineup with light, entertaining one-liners. Undoubtedly their presentation’s highlight were Anurag’s intermittent chutkules, his timely prompts to the audience for some impressive handclaps when he used the phrase pyaar ki barish, and Pooja’s comebacks during the presentation.
Like the colours of a rainbow, each act was unique and had a distinctive character, but all of them seemed to converge into Indradhanush. Like Indian culture, the event was diverse yet united. Though it ran late, the crowd stayed till the end, not wanting to miss a single bit of the event. A warm and memorable treat on a cold, rainy evening.