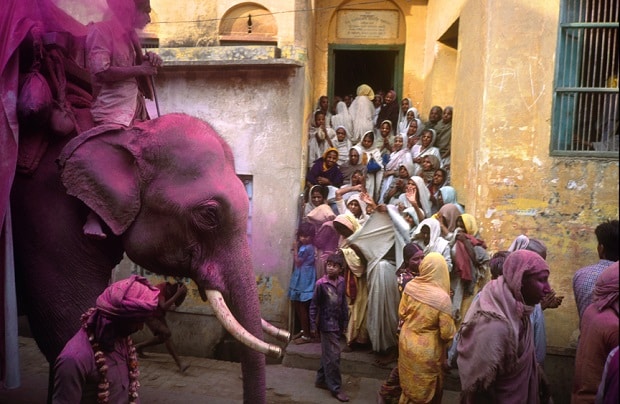 From fashion in London to the vivacity of India, an Australian photographer’s journey is documented on film. By LENA PEACOCK


Documentary film A Life Exposed explores Australian photographer Robyn Beeche’s dramatic transformation from London high-fashion photographer to documenter of Indian culture. Directed by Lesley Branagan, the film explores the vibrant rituals and colours of India, which contrast greatly to the life of a commercial photographer which Beeche left behind. The film was recently screened at Parramatta’s Riverside Theatre on December 2, as well as in New Delhi, as part of the Australian embassy’s Oz Fest initiative, and has received much praise in both the Indian and Australian media.
Robyn Beeche became renowned in London for her iconic images in the 1980s. Her pre-digital and pre-Photoshop images of painted bodies and celebrities, including Vivienne Westwood, were ground-breaking, and are said to have changed the rules of fashion photography forever. She used the human body as a blank canvas and used make-up, lighting and composition tricks to present trompe l’oeil techniques to great effect.
Despite this, at the height of her career, Beeche became ‘drawn like a magnet’ to India, and left the world of commercial photography behind. And 25 years later, she continues to passionately document India’s vibrant traditions as a spiritual service.
“When there is no creative director’s agenda to adhere to, the freedom of expression creates a different style and I am most interested in trying to capture the emotion and essence of the subject,” Beech told Indian Link. Beech says that she simply transferred her existing “style and brought it to bear in my Indian” photographs.
A finalist in the Australian Arts in Asia Award 2013, A Life Exposed takes the viewer on Beeche’s journey, weaving between Australia, England and India, as she discovers that success and fame are no longer enough. Archival footage of her 1980s London studio, interviews, observational footage and stills are presented, and the themes of transformation, spectacle, ritual and tradition are explored.
“The depth of Indian culture is the inspiration for my work on so many levels, be it religious practice, arts and crafts or the landscape,” said Beeche. “To capture those artisans and craftsmen who may remain anonymous particularly interested me, whether they were embroidering an intricate background for clothes to be offered in the temple, or creating a beautiful Sanjhi rangoli”.
Beeche’s love affair with Indian culture began with her first encounter of it at The Aditi (Creative Power) exhibition which opened the London Barbican Centre in 1982. “It was the vibrancy, the creativity which made me think to myself that on my next trip to Australia, I must experience this,” she recounted. “After the first journey I was hooked; and although it is true that there are challenges in trying to adjust to a very different culture, it also became very clear to me that I was more interested in Indian culture with a spiritual basis than the work I was doing in London,” she added.
“I saw a profile on Robyn in Dumbo Feather magazine, and I was instantly captured by her inspiring life story and her images,” said Lesley Branagan, the film’s director, to Indian Link. “We met up, and she agreed to make the documentary film. [But] if I’d known it was going to take 6-7 years, I might have reconsidered!” This is because of the numerous ‘ups and downs’ and problems with getting funding, but despite everything, it was a rewarding process. “It was some years before we could shoot the main footage of Holi, which was a highlight of both our process and the final film,” said Branagan. Luckily the film had many supporters both in Australia and India, which helped the filming to go ahead.
Branagan was careful to “retain the integrity and authenticity of Robyn’s life story and its spiritual focus, whilst making the story accessible to audiences,” she told Indian Link. With collaborative editing and post-production, she worked closely with both Indian and Australian editors. Branagan was also interested in making the film, as she is just as “deeply fascinated by all things Indian and immersed in the culture and place”. She also lived in India and spent some time working with organisations to help empower Indian women.
And what was it like working with Beeche? “It was really inspiring to work with Robyn, as she’s so deeply immersed in her region, her town, her ashram and her life path,” noted Branagan. “It was great to see her dedication to seva in action. She has a tremendous conviction about the value of documenting the regions”. Branagan also noted that Beeche’s “archive is going to have huge long-term value for the future”.
Beeche recounted to Indian Link how a photographer, after seeing her exhibition in Mumbai of UK portraits, told her that he “gave up commercial photography and travelled India photographing the people”. This is the kind of inspiration that she loves to hear about. Although her early work provides inspiration to photographers across the globe, her Indian photographs are “revered more in India, as ‘darshan’ in the temples is more understood,” she explained.
And Beeche’s favourite photograph? “I would say that the pink elephant with widows is one of my favourite images as there is a lot going on in the photograph which only became known to me afterwards, such as the small boy holding his head underneath the elephant,” she said. And Holi is one of her favourite festivals to shoot.
“The enduring friendships I made, filming Holi and A Life Exposed will forever be favourite memories of my time in India,” said Lesley Branagan.