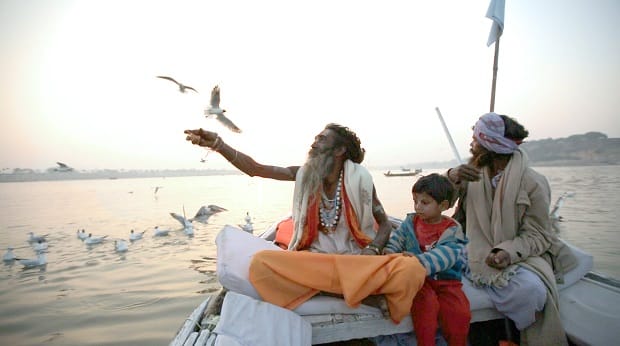 Reading Time: 5 minutesReligion, spirituality and reality combine to form a mesmerising documentary by a talented filmmaker

A teeming mass of humanity. The confluence of India’s most sacred rivers. Religion, spirituality and reality. Faith Connections, Pan Nalin’s latest offering about the Kumbh Mela, weaves a stark landscape with rich stories, ancient tradition and grinding reality to produce a visually stunning documentary. It leaves one with a strangely soothing mix of awe and child-like wonder, and taps into the transcendental.

Pan Nalin, a culturally agnostic and chic version of the name Nalin Kumar Pandya, is an internationally renowned filmmaker. His first commercial success was TV series Wagle Ki Duniya, a comedy series he wrote with the legendary RK Laxman in the late eighties. His documentary Ayurveda: Art of Being won international acclaim, while the spiritual love story Samsara was a massive success and won thirty plus international awards. Valley of Flowers, a romantic epic, was pre-sold to 35 countries and has achieved critical and commercial success.

Pan’s dizzying success belies an impossibly humble beginning. “I was born in a remote village in Gujarat, on the edge of the Sasangir forest. My father had a tea stall at the railway station”, he reveals. About his education, he jokes, “My primary schooling was done illegally, by bribing teachers!” An artistic child, Pan saw his first movie when he was eight or nine, and was captivated. “I told my arts teacher, I’m not interested in all this (schooling). I want to make movies”, he states. His teacher gave him sound advice. Pan needed to graduate in order to study filmmaking. They did a few calculations, and taking all the education needed into account, it would be 15 years before Pan could make a movie! “The drive started that day”, reflects Pan, “and since then it has never changed”.

The decision made, there was two things he needed to do. “I was told to learn English and to leave the village”, he laughs. “And I started working on this immediately”. His parents were a huge support. “They couldn’t read or write, but they believed in me, and would go out of their way to help me, which was very encouraging”, he recalls. Pan’s talent for painting got him scholarships, and he went to Baroda to study. He attended the film club run by the Faculty of Fine Arts at the university. “I discovered world cinema”, he exclaims, “and I would watch everything!” Plans to join a filmmaking course in Ahmedabad went awry, but this did not discourage Pan. “I bought a 16mm camera from a local flea market and decided to become a self-taught filmmaker. Every now and then, I would make enough money to shoot two minutes of reel!” smiles Pan. He started filming weddings, and that gave him enough money to travel and pursue his dreams. And for a filmmaker in India, all roads lead to Mumbai.

Mumbai broke his heart. “All my dreams about filmmaking and story telling were shattered”, he says. “The atmosphere was inhumane. And everything was controlled by dynasty. When you are not a Khan or a Kapoor in Mumbai, it is really tough to get an opportunity. People with no talent would get the chance to make two or three movies, and this was heartbreaking for me”, he adds. Pan started as a production runner, and soon a producer of advertisements noticed his talent. She gave him the opportunity to make corporate films which kick-started his filmmaking career. Then she introduced him to RK Laxman, and Wagle ki Duniya happened. You would think that this was it for Pan, but he had other plans. “I decided I wanted to travel, unlearn, and make the films I really wanted to. The French had New Wave cinema, the Germans had Expressionism and the Italians had Realism. There had to be an Indian way of storytelling”, he avers.

And in search of the new way, Pan travelled across the world. His next film, documentary Ayurveda: Art of Being had a theatrical release and ran for a year in Spain, and for a record three years in France. After that Pan wanted to move to fiction and make Samsara, a love story set in Ladakh. He looked for funding in India and encountered huge bias and prejudice. “No one wanted to finance a spiritual love story set in Ladakh, in the Ladakhi language. They said it looks like Tibet, not India, even though it is an integral part of India. Or they (producers) would insist on casting film stars who were north Indian looking, which is very wrong, because none of the Ladakhis look like Shahrukh Khan or Hrithik Roshan!” he laughs. He realised that he would not get funding in India, and moved his search overseas. He found a producer in Germany who loved the script but asked, “How will you make a film at 15,000 feet above sea level, in the Himalayas, where there are no hotels?” Pan had done his groundwork and had everything worked out. As for the hotel, he convinced the producer to build one using local material and people! “The local people were an integral part of this enormous process”, says Pan. “They were very keen on cinema, but Mumbai did not give them an opportunity. These Ladakhi girls and boys who wanted to make movies….they were humiliated and called ‘chinky’ or ‘Chinese’”, he says with a twinge of sadness. “But the hotel is still there, in Leh. This is where they now hold the Ladakhi International Film Festival”. Samsara went on to become the highest grossing Indian independent film.

With Faith Connections, Pan shifts back to documentaries. Interestingly, he was not very keen on making the film because so many had already been made. “I didn’t want to make a film with a lot of voiceover, statistic after statistic, and exotic naked baba shows. It had to be a film made from the heart. If I didn’t find characters that would woo me, I wouldn’t make the film”, he says. And woo him, they did! Faith Connections features diverse characters: a ten year old impudent runaway with underworld ambitions, a mother searching for her lost child, an enlightened, renounced yogi re-connecting with the world in order to care for an abandoned young boy. It conveys grief, tenderness, spirituality, faith and reality in a mesmerising package. “There had to be another way to tell universally appealing stories”, says Pan of his filmmaking ambitions. He’s found that way. Like he wanted, the documentary has very little voiceover. There’s only one statistic. There are a few naked babas though, but I imagine that’s very hard to escape at the Kumbh Mela.

Faith Connections will screen at ACMI Melbourne till  April 24.