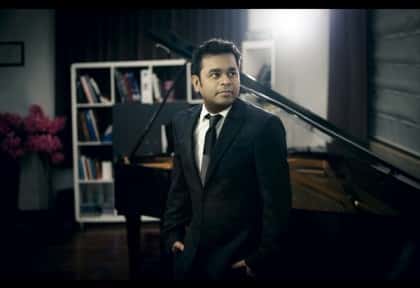 Nicknamed the ‘Mozart of Madras’ or Isai Puyal (the musical storm), Indian composer AR Rahman has been labelled a gifted music genius. But the musician himself doesn’t think of all that.
“I want to feel and enjoy what I do,” Rahman says. “Such things can corrupt thoughts.”
Somewhat reticent in interviews, the extraordinarily famous AR Rahman considers music to be an ongoing journey of personal fulfillment.
As part of the inaugural Asia-Pacific Triennial Of Performing Arts Festival (ASIA TOPA) in Melbourne, a concert will be held at the Sidney Myer Music Bowl in February 2017 showcasing Rahman’s work.
UK conductor Matt Dunkley will be leading the Melbourne Symphony Orchestra and a 30-voice chorus in performing Rahman’s compositions. The world-renowned composer will take to the stage as a guest and is looking forward to “closing my eyes and enjoying the music played by one of world’s best musicians”.
The unique concert will be arranged with musical pieces of Rahman’s work from works such as Bombay Dreams (commissioned by Andrew Lloyd Webber), The Lord of the Rings and Slumdog Millionaire. Other compositions, including collaborations with western composers, will also be performed. And yes, the exuberant ‘Jai Ho’ will also be played!

Rahman is very excited to visit Melbourne again. He has fond memories of his last concert in the city, held at Rod Laver Arena in 2005 as part of a concert tour to Australia. He recalls how the audience lit their mobile phones to send little halos of light as they swayed to his music.
“It was the first time I saw this happen at my concert and since then it is repeated in all my concerts,” he recalls. “But the first time always remains fresh in my mind.”
Will it be all work and no play when the musical maestro returns to the world’s most livable city?
“It will be a lot of play,” says the prolific composer with a laugh. “Most of the work has already been done.”

According to Rahman, there is demand for concerts purely focused on the music – without the on stage dancing and other trappings. Conductor Matt Dunkley and Rahman have been building on this for over a decade, albeit, slowly. They have had success with similar concerts in the past with ensembles including the Los Angeles Philharmonic and London Philharmonic Orchestra.
“Each orchestra has its own sound and spirit,” Rahman explains. “Music finds beauty in different places and it will be beautiful to listen to the renowned Melbourne Symphony Orchestra playing a special arrangement led by Matt Dunkley.”
Winner of numerous national and international awards, AR Rahman has received two Oscars, a BAFTA, a Golden Globe and two Grammy awards for the score of Slumdog Millionaire, and many nominations for his compositions for Danny Boyle’s 127 Hours.
His musical explorations, with a creative fusion of eastern and western sounds, have also received much acclaim in the west.

Notable among his other film compositions are Disney’s Million Dollar Arm, the film adaptation of the Richard C. Morais novel The Hundred Foot Journey, and Shekhar Kapur’s Elizabeth The Golden Age in collaboration with Craig Armstrong.
With a zeal for musical experimentation, Rahman has worked on collaborations like SuperHeavy with Mick Jagger, Dave Stewart, Joss Stone and Damien Marley.
He also created the music for ‘Chiggy Wiggy’ a track by Australian singer Kylie Minogue for the Indian film Blue. His career as a film music director spans over 25 years since his first award-winning soundtrack for Mani Ratnam’s bilingual film Roja.
With diverse musical roots, Rahman reigns over Tamil films, is in high demand in Bollywood and has carved his own special niche in Hollywood. With multiple commitments and involvements in non-film and other creative projects, how does he stay on top of his incredible workload?
“I definitely believe in the blessings of god, family support and the incredible love of the people who like my music,” Rahman says. “They are the reason I keep going.”
As a musician who constantly creates, composes and collaborates, where does he find his inspiration to experiment outside his comfort zone?
“One thing that works for me, always, is that I stick to what I would like to do,” Rahman says. “I sometimes take people on journeys that are not usual for them but they trust the brand and I know I can be honest so it sits well with my conscience. It can be hard but sometimes you need to take a leap of faith and keep on going.”

Rahman’s dream project, the KM Music Conservatory, a renowned, higher education institution in Chennai established by the AR Rahman Foundation, is continuing to evolve as the students are progressing into composers, singers or actors in musicals.
“It nice to see them progress,” he says in a soft voice. “As a commitment from the AR Rahman Foundation we are also nurturing a section of underprivileged kids who play with me,” he continues. “We are extending soon to form an interesting brass section and it is exciting to form our own orchestra with our own native musicians playing. The project will take some time but we will get there slowly and steadily.”
Rahman says his debut film, 99 songs, is currently in pre-production and planning is underway. He has written the story, soundtrack and score of this romantic Indian musical that will be directed by Vishwesh Krishnamoorthy. “This is my first production so I am very ambitious about it,” says the versatile artist. “It’s a triangle of budget, time and passion. A lot more will be revealed next year, but I can tell you now that we have made a lot of progress with the music of the film.”

Born Dileep Kumar, the talented virtuoso converted to become Allah Rakha Rahman at the age of 21. Though devoutly religious, AR Rahman’s innovative music transcends all boundaries.
When asked about his opinion regarding recent controversies in India with regards to intolerance and religious affiliations that are also affecting artists he paused to think before responding.
“Gandhiji famously said, ‘Be the change you want to see,’” he says. “Each one should just do their own thing, as politics is a reflection of what we are as individuals. If we are true to ourselves and to our country then the country will be accepting.”
Ahead of his arrival in Australia, AR Rahman hopes his fans will enjoy a unique concert and sublime musical experience.
“It is always beautiful to see people close their eyes and listen to my music,” he says, simply. “I intend to do just that; sit back and enjoy the music together with the audience.”