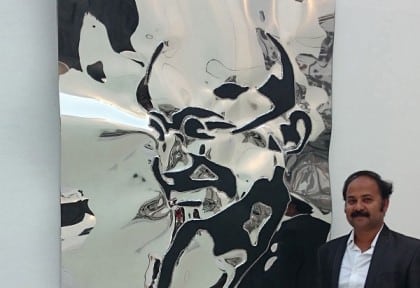 Borderless Gandhi at the Confluence of India Festival in Australia

Borderless Gandhi celebrated its first anniversary in Perth on 2 October, being Gandhi’s birthday (Gandhi Jayanti) and also the United Nations designated International Day of Nonviolence. Several intriguing sculptures in stainless steel have been installed at Elizabeth Quay in front of the Bell Tower as part of the exhibition ‘Mahatma in me’ by Delhi-based artist Vibhor Sogani, on display until 2 November, 2016. ‘Mahatma in me’ is organised by the Perth organisation Borderless Gandhi, in collaboration with Confluence Festival of India in Australia. It is supported by the Office of Multicultural Interest, City of Perth and Metropolitan Redevelopment Authority.

The project will host an event, ‘Unity by Borderless Gandhi’ on 19 October, where “…Faith leaders from various religions like Baha’i, Islam, Hinduism and others will hold hands around the art work to promote the message of harmony.”
Nilesh Makwana co-founded Borderless Gandhi with his wife Lene, who was born in Norway. “We chose art as a medium to get our message out,” Lene says. After growing up with a love for all things art from an early age, when Lene met, and later married, Nilesh they discovered a shared passion for working together on community projects. Together they created Borderless Gandhi, to create awareness of Gandhi’s legacy and “educate, inform and promote the ideology and values of peace, equality and nonviolence within Australia and on a global scale”.


The pair have faced many challenges.
“Things were looking bleak even until a few months back,” Lene says. “However, we received an encouraging email from Dr Ela Gandhi, the Mahatma’s granddaughter…and we thought, ‘We can’t give up now.’”
As Lene told The West Australian, “It’s important for the audience to interact with the medium and evoke the change from within, rather than just being told something. So Vibhor’s installation is perfect for us.”

Artist Vibhor Sogani was the winner of Indian Art Icon of the Year in 2014. He is an artist who works with metal – in this case stainless steel and iron – and usually with abstract art. Working on this project was a challenge for him in many ways because it involved a human personality rather than abstract concept.
“All will see images of the Mahatma. Most will find reflections of the world,” Sogani says. “Many will see their own selves reflected. Some will look to find their souls. A few will act to realise the Mahatma within.”

Besides the sculptures, a number of workshops and interactive events are planned over the month to celebrate and share the Mahatma’s values. Notable among them are an ‘eye-contact’ experiment by social artist Peter Sharp, an interactive art workshop by Colosoul group, and yoga sessions by Fire Shaper Hot Yoga.
For details visit borderlessgandhi.org.au
- Advertisement -
Share
WhatsApp
Facebook
Twitter
Linkedin
Previous articleThe rainbow connection
Next articleBharatnatyam and its rich rewards for learners