The human condition in the Internet age 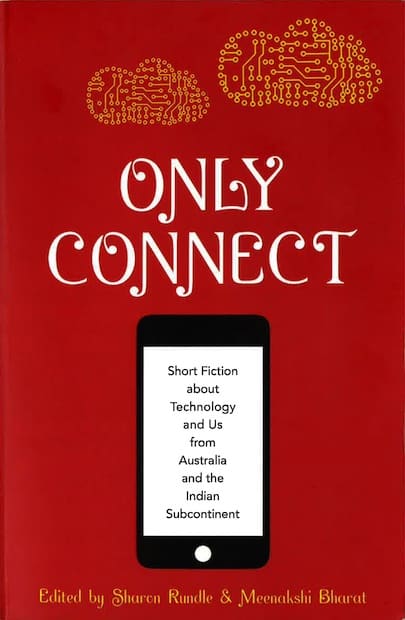 Reading Time: 4 minutesWe might be robots, but robots have feelings too. SALMA SHAH reviews a newly released collection of short stories.

A new collection of short fiction by Australian and Indian writers, called Only Connect, is a rich and rewarding compilation that focuses on the ubiquity of technology in our lives. However, instead of technology being the key aspect, the stories are based on the different ways in which technology enhances human behaviour.

Each story highlights how human desires, emotions and instincts are transcendent through time, but are also shaped by technologies that allow them to manifest in newer, more creative ways.

The intelligent editing compiles a collection of diverse stories that create an overall narrative. The reader is moved forward through each tale by a rich palette of human emotions and actions without ever getting a sense of sameness between the stories.

A Software Sonata and Sneha, 25 expose a new way of the ritual of coupling. In the past, potential couples would meet and form relationships usually through relatives or friends. Now, the use of email and texts, and indeed, snooping software, allow individuals to pursue this already complicated game on their own.

Sneha, 25 demonstrates the perverse nature of the use of technology, and how when placed in the hands of someone with extensive technical expertise, can result in sinister behaviour.

However, despite the subtle undertones of danger, the reader still anticipates a safe ending.

Sneha, 25 brings to life what many readers fear about technology. At the end of this story, the author cleverly shows that while there may be reluctance or fear when playing the mating game online, technology can be just another way to fast track one’s dating objectives.

A Software Sonata, also a love story of sorts, is compelling, not because of the age-old narrative of boy-meets-girl, girl-contrives-situation-to-be-with-boy, but because of the particularly provocative and snappy dialogue between characters.

The author’s clever use of code switching heightens interest in the verbal interplay between the two friends, and potential lovers. The reader is left with little choice but to be fascinated and highly entertained by these two brilliant characters.

If A Software Sonata seduced with its prose, then Anu Kumar’s Two Women, delighted with its descriptiveness.

The story depicts the thoughts and emotions of two women, who are the same, but yet so different. Both women, abandoned by their husbands, are travelling alone while dealing with the grief of shattered lives.

The narrative conveys interest in the outsider.  While Malati only sees the foreigner Dorothy for her exotic appearance, and is interested in knowing more about her mainly to assuage her curiosity, others on the same bus see the sameness of the two.

Yet again, the language interplay between characters offers a tapestry of delights for the discerning reader, who will undoubtedly recognise and appreciate vernacular and the use of idiom.

The language techniques emphasise the depth of the characters and offer readers an insight into post-colonial thinking, where people are ready to judge foreigners based on what they see on television, but fail to see how foreigners are no different from themselves.

Then there are the two stories that, despite offering common themes of procreation, differ markedly in the story told.

B Wid U Soon by Meenakshi Bharat tells of the quiet desperation of a husband who, due to a series of events, is unable to be with his wife for the birth of their first child. This tale flows swiftly and the reader senses the palpable release of emotions almost at the same time that the new father does. Finally, when he sees a picture of his son for the first time, he lets his emotions flow freely.

In contrast, in Friending and Trending by Roanna Gonsalves, we meet a husband who is more interested in living his life through social media and technology, even as his young wife is unable to carry a baby to term.

Likewise, in each story, the characters become real and develop depth, not just because of what they say or do, but also through their interactions with technology. It is in these interactions that we see human frailties and strengths that are identifiable to the reader.

There are some who say that technology has changed us. However, it is arguable, as seen in each story of this delightfully entertaining read, that the human condition has not changed at all.

We still love and yearn and feel those same emotions we have always felt. What has changed is the forum with which we can express each of those human foibles. We still love, but we declare it using a new medium. We still betray those whom we seek to control, using the most efficient means available. And even if we are separated by distance, the connectedness enabled by technology does not overcome the tyranny of separation.

Only Connect is a thoroughly enjoyable read. This book will offer technology and social media addicts a respite from technology, and will allow such readers hopefully, to see some of themselves in each of the characters. When this happens, one hopes that self aware readers will see the constraints of living their lives within the technology, rather than the technology enabling the life they could be living.