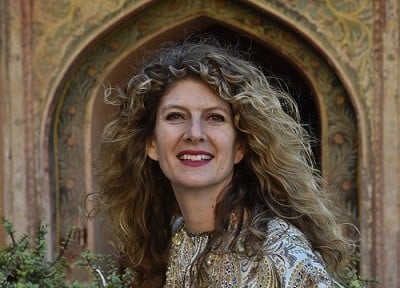 Catriona Mitchell’s first trip to India left her feeling so overwhelmed that she “kind of hated it”.
“And then, on the flight back to Australia, I was just thinking, I just want to turn the plane around. It had got under my skin in such a deep way.”
Mitchell now goes back twice a year to work on the Jaipur Literature Festival and other literary events.
“It’s really working in India that I love the most,” she says.
So much so that in 2012, in what Mitchell calls “a kind of human experiment”, she co-created ‘Bookwallah’, a month-long literary train tour around South India. Australian and Indian authors living in close quarters on a train. 200 books in a kangaroo-leather foldout bookcase that worked as a “pop-up library installation” at train platforms, art galleries, hotels. Events, readings, discussions almost every night. It was intense.

“I feel like everything that happens outside in India happens in a condensed way inside the train,” she laughs.
But the intention behind the project was to introduce Australian authors to India, and draw attention to Australian literature, which wasn’t being fully represented on Indian bookshelves.
Her most recent project, editing Walking Towards Ourselves: Indian Women Tell Their Stories, began with a similar discussion with Meelee Soorkia of Hardie Grant Books around an opposite problem; the dearth of Indian women’s writing on Australian bookshelves. Although they originally envisioned a more eclectic collection of fiction, poetry and essays, they began to talk about what it really meant to be a woman in India. The result was asking Indian women “to write about their own lives…to write from the self, to do really intimate personal nonfiction narratives”.

The Delhi rape case of 2012 was very much on their minds, as well as the negative reporting of India that came in its wake.
“As someone who is such a lover of Indian culture I felt…it’s kind of a shame, because it’s all people really associate with India at the moment,” Mitchell says.
The anthology begins with a powerfully reflective prologue from Justice Leila Seth, the only female member of the anti-rape commission assembled in response to what became known as the ‘Nirbhaya’ case. Following this are 18 stories, in both English and English translation, that reflect a range of female voices and experiences from around the country, and take us into the many different worlds – and thought-worlds, and idea-worlds – inhabited by Indian women. The threat and, sometimes, the violence, of the male gaze and the male-dominated space is an undeniable undercurrent, but Mitchell is keen to point out that Walking Towards Ourselves is not about being “anti-men”, but being celebratory of women.
“I think it’s just really important to create a platform where women’s stories are heard…because they are historically so unheard.”
When I ask whether she thinks things have changed for women in regards to violence since that pivotal ‘Nirbhaya’ case, Mitchell grows thoughtful.
“What is definitely increasing is the amount that people are talking about it…The outcry was so extreme, that it really shattered that silence.”
Walking Towards Ourselves is in its turn a further pulling away of this shroud of silence around the female experience in India. Women are front and centre. They are bold. They are honest. And they are there.
Literally. At the launch of the Indian version of the book at the Jaipur Literature Festival, in January this year, there were 12 women on stage. It was the greatest number of women who had appeared on that stage together, and it was, Mitchell says, “a beautiful moment”.