The colours of India 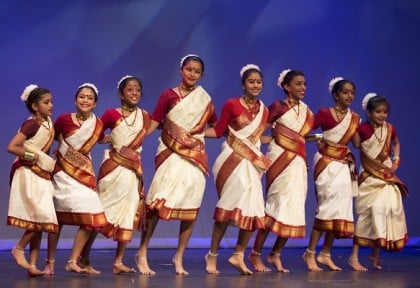 In honour of India’s Independence Day, ISWA puts on a show like no other

Truly deserving all the adulation and praise, the curtains rose and thousands of Perthites saw the ravishing stage all set for the cultural treats and dances, from all the states of India, as ISWA staged another grand event, Navrang 2016.
The Perth Convention and Exhibition Centre roared with the tarang of Indians, as the star performers on stage shone throughout this high glamour, artistic evening.

Delving into the arena of authentic Indian art, the show began with the national anthems of Australia and India performed by the members of Basava Samithi of Australasia.
The notion of the path of salvation and enlightenment showered by the gurus in the journey of life was depicted as ‘Anubhuti’, presented by Sumita Dutta and Dr Sonia Nair’s group.
Following this, Abhinaya School of Kuchipudi presented an iconic Lord Shiva dance in the most captivating way, showing how each of his movements make small changes to the universe every single second.
Adding another element to the event, Rakhi Bose and her team performed a classical and Bollywood dance fusion which was then seamlessly followed by the Assamese dance by the Jhumur dance group.

Using various props and mesmerising formations, the Tamil Association of WA groovers rocked the stage. Then came the jugalbandi of Mohiniattam and Bharatanatyam called ‘Layam’, a riveting duet between the two distinct dance forms.
The young girlies smashed it with their twist of acrobatic elements in the Indian classical dance.
‘Mana Pandagalu’ was a beautiful performance merging elements of the four important festivals of India: Janamashtami, Navami, Sakranti and Deepavali.
This drew us towards the much awaited “star performance” of the night – Bollyhood. You can bet their style and their moves made everyone whistle in appreciation.

Following these performances, awards were distributed to the young achievers of our Indian community here in Perth. Ramkrishan Bansal extended his sincere thanks to the management committee while Dr Mike Nahan did the honours and congratulated ISWA and the local communities which are always working towards the strong and unified voice of Indians in Perth.
Disciples of Bharatnatyam guru Shobana Gobu Iyer presented a recital called ‘Pushpanjali’. The youthful and talented ‘Raaga Band’ marked a nostalgic presence on the stage. They work in the community to bring out natural talent and mentor students to restore Indian melodies/
From the roots of Madras, the Tamil Association brought us a blend of style, grace, entertainment and masala straight from the vibrant city of Chennai.

The Bangla Association gave tribute to the Legend Guru Dev Rabindranath Tagore by singing India’s national anthem and Bangladesh’s ‘Amar Shonar Bangla’.
The Manjeer dance group showed impeccable fusion of Indian Classical and Latin American dance styles, while the Perth Mauritian Cultural Association performed a Sega dance, channelling their ancestral ties which date back centuries.
Music and dance are not meant for only entertainment but for spiritual betterment of the performers and beholders. Kannada Sangha’s performance portrayed how Chitradurga, one of the most heroic women of 18th century, chased away the forces of Hyder Ali with a pestle.

A pearl of the Indian Ocean, Sri Lanka has many riches, out of which the Perth Sinhala School chose to perform a dance called ‘Mayura Vannama’.
Gujarati Samaj tuned up the volume with their evergreen Garba. They always light up the stage!
The evening concluded with foot tapping Bhangra and a dazzling Bollywood dance.
Though this magical event ended for another for a year, warm wishes to ISWA for a remarkable Navrang 2016!