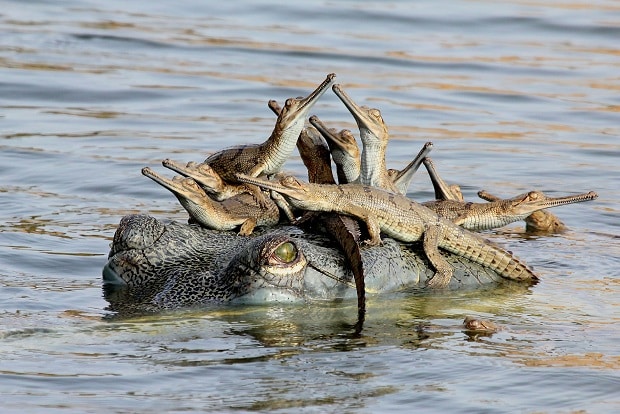 The Wildlife Photographer of the Year (WPY) exhibition has returned to Australia this March, and this year features a winning entry by young Indian photographer Udayan Rao Pawar, alongside a highly commended entry by Australian Justin Gilligan. On display at the Australian Museum 29 March – 1 June, the exhibition features 100 striking wildlife images from around the world which highlight issues affecting our natural environment.

14-year-old photographer Pawar has been awarded the impressive title of not only winner of the 11-14 Years category, but also overall Young Wildlife Photographer of the Year 2013 for his image of gharial crocodiles, Mother’s little headful. Also in the exhibition, is Gilligan’s commended work Hook, line and sinking taken off the coast of NSW at Seal Rocks, in the World in Our Hands Award category.

The Young Wildlife Photographer of the Year title goes to the ‘most memorable of all entries’ taken by photographers under the age of 17, and awards them 1,000 and a masterclass with a professional photographer who specialises in wildlife photography.

Pawar, a naturalist and photographer from Madhya Pradesh, central India, grew up surrounded by wildlife. His interest soon turned into a passion as he noticed the gradual loss of wildlife around his home, leading to his conservation work.

“I spent my early days exploring my backyard and also roaming in the wild, just simply soaking in the sites, smells and sounds of the jungle,” Pawar explained to Indian Link. “Later I started identifying species using binoculars and field identification guides, and when I got my first point and shoot camera at the age of nine, I found it to be a very useful tool. Two years later, with improved skills and experience, I upgraded it to an entry level DSLR, using it not only to document and study wildlife, but also for artistic expression”.

Pawar describes the inspiration behind his photographs as the “splendour of the natural world,” as well as the satisfaction that he is, in his “own small way, promoting conservation through photography”.

Living within reach of the what Pawar describes as the “last stronghold” (the Chambal River) of the critically endangered fish-eating crocodile, the gharial, Pawar works alongside field staff to help them to carry out surveys and collect eggs for a restocking program. Gharials were once found in rivers all over India, however today, just 200 or so breeding adults remain in just 2% of the former range.

Pawar thankfully has supportive parents who are behind him 100%, even when he wants to camp out overnight near the banks of the river, as he did for his winning photo. At the time of print he had also just returned from an exciting visit to the Panna Tiger reserve.

Taken on a Canon EOS 550D + 100-400mm lens; 1/400 sec at f13; ISO 1600 (for those interested in the technical side of things), Mother’s little headful is an arresting shot of the gharials on the banks of this river, which is increasingly “threatened by illegal sand-mining and fishing,” Pawar notes.

Pawar has been visiting the area since he was young and has long been fascinated by the creatures, in particular their complex social behaviour. “The chief female of the breeding group, which consists of a male with a harem of several females, looks after all the hatchlings of that group (creche system),” said Pawar. “It had been my long standing wish to capture this on camera, particularly with the hatchlings perched on top of the female’s head, as this, I felt, would not only make a very interesting and captivating image, but also send out a powerful appeal for its conservation”. Which the image certainly does.

Pawar had attempted to capture this photo numerous times before he was successful. “In 2011 early rains had swept away the hatchlings,” he explained. “I was more lucky in the summer of 2012 when I managed to get the image I was looking for, even though the area was a bit tense following the confiscation of tractor-trollies engaged in illegal sand mining by the forest department. I reached the place late in the evening, and finding the light conditions unfavourable, I spent the night out in the open some distance away from the river. When dawn broke I crept down and hid myself behind a rock and got this image. The mother rose to the surface from the murky depths of the river in response to the guttural calls of hatchlings, which then rushed towards her and climbed over her exposed head”.

“The composition and timing of Udayan’s photograph is perfect,” says judge Tui De Roy, an acclaimed naturalist and wildlife photographer, of the image. “The mother’s gaze seems directed at you, appealing to you to let her live and thrive in peace. This image is beautiful and thought-provoking, but at the same time also wonderfully playful, making it a clear winner”.

It is the mother’s eye that draws the viewer’s attention to the photo with her bright green gaze. The viewer’s gaze is then lifted up towards the pyramid shape that the baby gharials form on top of the mother’s head. Some of the babies lead to the left and one to the right, but the viewer’s gaze will continue to be drawn inwards to the centre of the photo. It is a well-balanced image that speaks volumes of these creatures.

Unless the viewer is to know that gharials are not very dangerous, it can seem like the danger that lurks beneath the water; the mother crocodile, is equal to the danger posed to the home to these mainly gentle giants. This universal relationship between the hatchlings and mother evident in this photo makes it easy to relate to.

Indian Link also asked about what the future holds for this young enthusiastic photographer? “I am deeply passionate about wildlife photography and am thoroughly enjoying doing it presently, so I guess this is where my future lies,” says Pawar modestly.

When asked what his favourite photo in the exhibition is, Tiger Untrapped by Toshiji Fukuda is Pawar’s answer, although he mentions that it’s “a difficult question to answer because all the images were absolutely fantastic”.

Gillian, on the other hand hopes that his image can help educate viewers to the plight of sharks around the world. “At least a hundred million are killed annually mainly for the shark-fin trade,” he says.

“More and more the award is becoming an avenue for raising environmental awareness and sharing information about endangered species,” says Frank Howarth, director of the Australian Museum. “We are proud to present these breathtaking photographs”.

Co-owned by the Natural History Museum in London and BBC Worldwide, the 2013 competition received almost 43,000 entries from across 96 countries. After its Sydney exhibition, it will travel to Newcastle Regional Library (14 June – 10 August) and Queen Victoria Museum and Art Gallery, Hobart (30 August – 27 October).