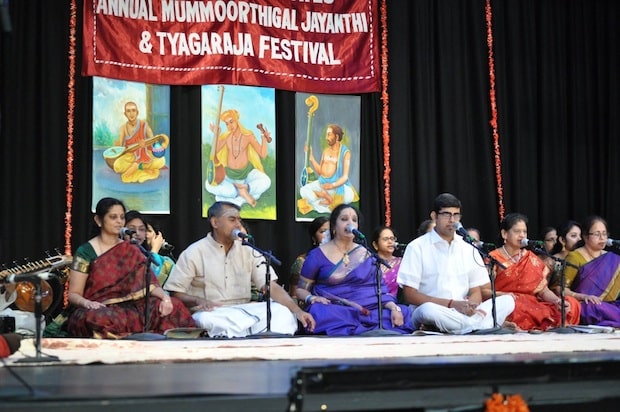 The annual two-day Mummoorthigal and Thyagaraja Festival organised by the Ravichandhiras of the Academy of Indian Music Aust Inc. and Sruti Laya Kendra, India, was held at the Kel Watson theatre in late May.  This is the 167th anniversary of Saint Tyagaraja. This event pays tribute to his contribution to Carnatic music, as well as that of his illustrious contemporaneous composers Muthuswamy Dikshitar and Shyama Shastri.

The gala event began with a traditional puja at the altar, followed by the congregational singing of the Pancharatna kritis, the five immortal ‘gems’ composed by Thyagaraja.

For the Carnatic music connoisseurs of Melbourne, this is a much awaited event in their annual music calendar. There are few that can equal the grandeur and the splendour of the top vocalists, instrumentalists and percussionists rendering these great compositions together. It is a truly uplifting experience. This year, they were joined on the stage by visiting artistes Sikkil Gurucharan, Shaswati Prabhu (vocalists), mrudangam maestro Karaikudi Mani, violinists Sriram Kumar and A G A Ganasundaram, and Bangalore Amrith, kanjira player. Maestro Karaikudi Mani has performed with many international artistes including Jazz musician Paul Grabowsky of the Australian Art Orchestra.  A series of his compositions were adapted by the Australian Art Orchestra into jazz and released as album Into the Fire in 2000.
The Talented Young Musicians Ensemble (TYME) is an initiative of Sri Ravichandhira to encourage and promote young, emerging artistes of Melbourne by giving them a platform and an opportunity to perform before top Carnatic musicians and dancers from India, as well as a discerning audience. The group got all of this and much more at the festival this year, presenting some interesting items, one of which was directed by Gurucharan himself assisted by the Iyer brothers.

A competent and lilting bharatanatyam presentation was also made by a number of students nominated by Melbourne’s reputed dance schools under the coaching and able guidance of Shanthy Rajendran, which aptly included, among the items, Thyagaraja’s Sri Ganapatini in raga Saurashtram. These were followed by individual concerts by the cream of Melbourne’s Carnatic music community, all familiar and established artistes and teachers.

One of the highlights of the entire event was the full-fledged vocal concert by Sikkil Gurucharan. He was supported on the violin by Sriram Kumar, on the mrudangam by Karaikudi Mani and on kanjira by Bangalore Amrith. The percussion interlude by Guru Mani and Amrit was a stunning masterpiece.

The second day began with a TYME ensemble. The instrumental segment was presented under the able guidance of A G A Gnansundaram which reflected the true Lalgudi padantharam. Percussion was overseen by Balasri Rasiah, which gave some insight into distinctive styles of structures composed by the stalwarts. After some individual vocal and instrumental concerts by the cream of Melbourne’s Indian classical artistes, AGA Ganasundaram presented a violin solo. Rajeshwari Sainath, a well-known bharatanatyam artiste, who is no stranger to Australia, having performed here on many occasions such as TEDx Sydney where she was hailed for her ‘imaginative splendour that goes beyond technique’, gave a brilliant performance, consisting of a full repertoire: beginning with a mallari, a varam in valaj composed by the legendary music critic, the late Subbudu.  In it, a marathon item, Ms Sainath not only displayed her mastery over natya, but also nritta by weaving intricate patterns with her footwork, the jatis having been composed by her uncle Karaikudi Mani himself, and adavus which would have been a challenge to dancers even much younger.

Vocalist Saaswathi Prabhu (a disciple of the legendary Lalgudi Jayaraman) impressed with her pleasing and tasteful selection of music. Young Sai Nivaeithan who recently obtained B high grade in All India Radio made us proud by his effortless delivery of Nadham mixed with dexterity on his mridangam.

The festival director Ravi M Ravichandhira OAM, said the event has now become an integral part of Melbourne Indian community’s cultural calendar and was recognised by leaders in government, Australia Council, Department of Foreign Affairs, and the community, as evidenced by the presence of both Liberal and Labor leaders this year. It has grown in the last 25 years to become perhaps the second largest conference and festival of its kind outside India.

The festival’s overseas guest of honour was Prabhu Yagyaraman, the Secretary of one of the most respected sabhas / musical societies in Chennai, the Krishna Gana Sabha. He had high praise for the way in which the festival was being conducted, keeping classical traditions alive in a land far from home.