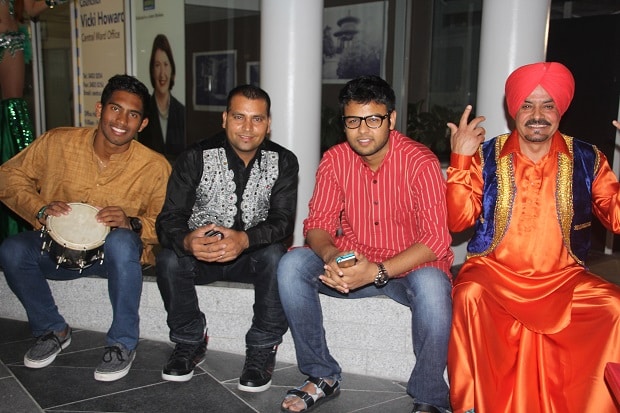 Reading Time: 3 minutesA versatile band belts out Bollywood and traditional beats from the Punjab for an appreciative audience

The Brisbane Babas Band filled Chinatown Mall with the rhythmic sounds of bhangra on the night of Saturday, March 2. They were a part of the vibrant Valley Multicultural Festival, a nine-hour celebration featuring a variety of cultures with live entertainment, roving acts and musical performances. The Babas shared the programme with Russian Folk Ensemble Samotsvety, Heilani Polynesia dancers and a Brazilian stilt-walker, amongst others.

Established in 2003, the Brisbane Babas Band specialises in live performances of Bollywood and rhythmic bhangra songs which include foot- tapping favourites and current hits. The Babas have played at an eclectic set of events including the Woodford Folk festival, Emerald Multicultural festival, Roma Street multicultural festival, a multicultural community awards night, the Racecourse Road Cricket Carnival and Oxfam Australia. Members of the band comprise of Umesh Chandra, manager and percussionist; on keyboards is Parth Raval; Kushal Sami is on tabla; Jaggi Dholi is on the dhol; the octapads, digital devices played by drummers and percussionists that produce any digital sound, are played by Chandra and Alpesh Vaitha; and finally, the group is complete with singers Satnam Singh Bhangra and Baldev Singh Nijjar.

The band was formed when Chandra met Vaitha who he describes as ‘a very talented musician’. “We started very small and low-key, and soon attracted other members who contacted us once we started getting known”, explains Chandra, stating that the group’s name is derived from a very old Bollywood band called The Babas.  “A few members went to Melbourne and formed the Babas Orchestra, and then a few members went on to solo performances on backing tracks, so in Brisbane we called it the Brisbane Babas Band”, he added.

The bhangra numbers are performed by the two main singers, which are also the crowd pleasers. “The bhangra songs are are very rhythmic, colourful and energetic. Most of the numbers are from Nijjar’s CD  titled Punjab and included the songs Booliyan, Kabbaddi, Munda ho gaya Crazy, Haijmalo with some original numbers written by the singer as well”, explains Chandra. Ashutosh Saroch brings Bollywood to the stage and sometimes other singers also join the group. “Bollywood songs are very popular with the audience and although we do mainly the fast rhythmic numbers, we have done mellow numbers as well”, says Chandra. “Our Bollywood numbers are mainly derived from the movies and music videos”, he adds.

The versatile group tailors their programme to suit the occasion and wear traditional Indian costumes when they play throughout Australia. Importantly, regional Australia doesn’t miss out as their main gigs are for regional councils and multicultural festivals and the band performs almost every week. Among many, their two most memorable trips were the Emerald and Auckland tour.  Chandra says, “In Emerald the mayor was at the airport to receive us and they treated us like royalty. Our members have had the opportunity to perform with visiting stars from Bollywood such as Anuradha Paudwal, Rahat Fateh Ali Khan and the Waadali brothers”. Chandra says the combination of audience participation, music and dancing are at the heart of the band’s passion. “The whole band experience is extraordinary, no matter how tired you are, you always get pumped up before performances. When we have a large crowd cheering and dancing to our music, we get all charged up and our energy levels go up”, he reveals with a smile.