Tales from the middle 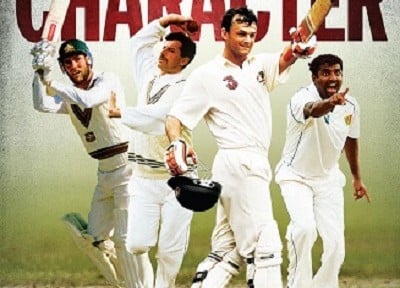 Cricket in its longest form is perhaps the most character-building team sport in the world. Over the years, Test cricket has evolved remarkably – and often reluctantly – as the demands of professionalism and relevance chased after it. Originally timeless affairs, matches were truncated to six-day contests with a rest day, until they were eventually curtailed to the five-day format most of us are familiar with today. Pitches are now covered; but ironically, it is only now that batsmen wear such extensive protective paraphernalia.

With such a rich history steeped in tradition, romance, rivalry and cross-cultural intrigue, the one constant in Test cricket’s evolution is that it continues to breed the best; it is in the cream-coloured clothing that cricketing heroes establish their legend. And on this premise, Jeremy Wilshire’s Test of Character: Confessions of Cricket Legends presents an honest, unflinching collection of first-hand accounts from some of the greatest to have ever played the game. Unlike many of its breed, Test of Character tells more than one story; but like no other, it tells each story with no embellishment.
Broken into three distinct sessions – a morning session (for those who debuted before 1975); a middle session (debuts between 1976 and 1995); and a final session (debuts after 1995) – each features a candid Q&A with a range of cricketers. The book also contains ‘refreshments’ from John Cleese, Waleed Aly, and a pitch report to whet the appetite: a previously unpublished interview with the late Sir Arthur Morris, the leading run-scorer in the famous 1948 Ashes tour by Bradman’s ‘Invincibles’.
Without giving too much away, here are some of our favourite snippets from the book.

One of India’s most celebrated spinners, Bishan Bedi’s left-arm orthodox was as beautifully deceptive as his stamina was relentless. Wilshire notes Jim Laker’s famous quip – “My idea of paradise is Lord’s in the sunshine, with Ray Lindwall bowling from one end and Bishan Bedi from the other” – and lauds Bedi for his honest, outspoken and morally sound approach to the game.

In a revealing insight into his no-nonsense personality, Bedi breaks the mould of his peers, denouncing cricket’s leading wicket-taker, Muttiah Muralidaran, as a chucker. “Now, after long deliberations, the ICC is trying to put their foot down, not allowing people to bowl the doosra and other rubbish, but the damage has been done. Murali was an outstanding example…I mean, why allow a bent arm of 15 degrees at all? A chuck is a chuck, is a chuck! Period.”
Bedi also laments India’s overindulgence in “stupid” T20 cricket. “We are playing far too much of this rubbish,” he says. “It’s my deep concern that in a few years’ time India might finish up like the West Indies, where we don’t have a Test team.”

Greg Chappell and India became inextricably linked when he took over as head coach of the Indian cricket team in 2005. Chappell’s infamous spat with captain Sourav Ganguly, and eventually, the team at large, led to the ignominy of a premature resignation.
“Sourav didn’t understand [why process is more important than the results]…We needed to look at what good teams did on a consistent basis in order to be successful. That takes a lot of discipline and hard work. For Sourav, that was a bridge too far. As much as he said he was going to buy into it, he didn’t change his habits. So we moved on to Rahul Dravid and he bought into it. He understood it,” says Chappell.

Somewhat embarrassingly for Chappell, Ganguly was one of the leading run-scorers in the ODIs and Tests that took place immediately following his recall to the side in 2007.
Chappell also talks in amazement about the art of being Sachin Tendulkar. “Tendulkar was amazing to watch at close quarters,” continues Chappell. “Travelling with the Indian team was like travelling with The Beatles. If you went into an airport, everyone downed tools. Everyone wanted photographs with Tendulkar and he couldn’t afford to refuse…He couldn’t really refuse to talk to anyone.”

Rahul Dravid’s career after retirement has been much like his presence at the crease: steadfast, respectful, immovable and full of integrity. As a patron for the LBW Trust (to which a percentage of the book’s proceeds are being donated), as well as an ambassador for the Children’s Movement for Civic Awareness, today Dravid is widely regarded as a responsible, reliable custodian of the game.
Dravid’s “test of character” came in the greatest Test of them all – Australia at Eden Gardens, 2001 – and, like most of us, Dravid is not forgetting those moments in a hurry.
“The feeling of the last 40 minutes of that Test match stays with me, when the whole crowd got behind us and was cheering every single ball in acknowledgement of the team. So many years later, I can still almost feel those goosebumps and feel the emotion of how the crowd got behind the team and willed us across the line in those final stages,” says Dravid.

As legendary umpire Harold ‘Dickie’ Bird remarked, the beauty of cricket “lies in the stories within the game” – and Test of Character certainly delivers.