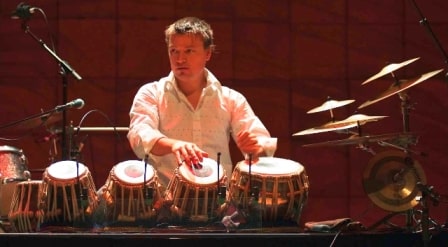 Despite his humble upbringing in rural Australia, Sam Evans has carved a niche for himself in the realm of Indian classical music in Melbourne and beyond, with his instrument of choice being the tabla.
Sam has always had a fascination for drums from a very early age and travelled the world for the sole purpose of discovering a percussion instrument that would electrify him. After extensive trips to Africa and different parts of Europe, Sam had his eureka moment in Varanasi when he spotted someone playing the tabla, and since then there’s been no looking back. “I always wanted to excel at something and the tabla is what I’ve chosen to be good at,” he says.
Sam lived in India for nearly a decade during which he learnt to play the tabla from renowned Pandit Anindo Chatterjee. Armed with Bachelors, Honours and Masters Degrees in music performance on this instrument, he has performed live on Indian and Australian television, written music for documentaries and performed on both national and international radio. He continues his stellar career, performing with a variety of bands at international jazz and world music festivals.
In Melbourne, Sam performs solo at tabla concerts and plays with a number of traditional Indian ensembles. He has also toured with internationally acclaimed Indian classical guitarist Debasis Chakroborty in both Australia and India, with whom he has released the album Charukeshi.
Apart from his music commitments, Sam launched the Melbourne Tabla School in Hawthorn in 2007 and currently has about fifty students from all age groups. Additionally, he holds lectures on Indian and world music, as well as running a program on Indian rhythms at the Monash University.
So when did it dawn upon him that he could make a living playing the tabla? “I started to learn the instrument when I was 19, and there came a time when some people from the audience would ask me if I was willing to teach their children.  It was due to this demand that the tabla school came into existence,” the livewire musician reveals.
Having watched Sam perform at concerts, one must admit that he brings a lot of fun and energy to his performances. He adds, “It’s a reflection of my personality and comes naturally to me. Also, we need to enjoy and have fun when we learn something otherwise there’s no point in learning it.”
Being proficient in the classical genre, Sam believes that Indian classical music is in safe hands, despite the advent of technology in music. “Ten years ago I would’ve thought Indian classical music was on the wane but since opening the tabla school in Melbourne, I am surprised by the number of people still very keen to learn the tabla extensively,” he says. “Moreover, learning to play an instrument is beautiful just like the fascination to read and write or learn a new language. As for Indian classical music, it was Pandit Ravi Shankar who modified the elaborate traditional music structures of the tabla in America, and adapted it to suit the modern society we live in where everything is expected to be instant and immediate. So, Indian classical music has adapted very well and will never die,” he adds vehemently.
The versatile Sam is also part of popular Melbourne-based band ‘Fine Blue Thread’ that is steeped in the genre of world music. He adds, “Our target audience is limited but we are now working on an album throwing in elements of pop, yet retaining our world music sound.” Their last album, ‘Red Mountain’, received rave reviews in Australia and Europe, and one of the tracks from the album was featured on a world music CD compiled by the BBC titled ‘A Beginners Guide to the music of India‘ alongside compositions by legends such as Ravi Shankar, Nitin Sawhney and Nusrat Fateh Ali Khan.
With a ceaseless desire to improve, motivation to play the tabla after nearly twenty years comes naturally to Sam. “I don’t consider myself an expert yet and am still learning. I just want to keep going forward as there’s so much more for me to explore with this instrument,” he says.
As for the future, Sam is showing no signs of slowing down. He says, “I am almost through with writing a book on tabla notations primarily for the western audience which should be published soon. I hope to do a PhD in a few years’ time, and I want to see the tabla school grow into a few more outlets spread across Melbourne. Also, I would love to continue to explore different music genres with the tabla.” He has also written a chapter on world music and the tabla in the Oxford Handbook of Music Education which was released this year.