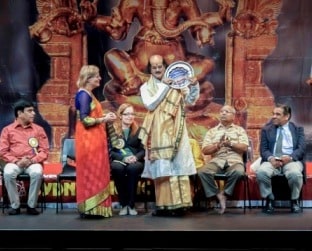 Reading Time: 4 minutesLovers of Carnatic music were treated to a bevy of unique performances at the annual Sydney Music Festival

The Swara Laya Fine Arts Society’s 7th Annual Sydney Music Festival kept lovers of Carnatic music enthralled for the better part of the Queen’s birthday weekend at the Riverside Theatre in Parramatta. The 3-day festival was notable not just for the high quality and calibre of the artistes, but for the opportunity it offered to the performers to express themselves creatively.
Ms Julie Owens, Federal Member of Parliament from Parramatta was Chief Guest, and Ms Julia Finn, Councillor from the Parramatta City Council was a special guest.  The honour of playing the saxophone for the inaugural concert went to Dr Kadri Gopalnath, the only world-renowned saxophonist who plays Carnatic music.  Credit was duly given to him for mastering a complex western instrument, modifying and perfecting it for 20 years, adapting it to playing nuances of Carnatic music. Dr Gopalnath was commended for his achievements, his versatility to play music for well-known AR Rahman compositions, and playing in Jazz festivals in Prague, Berlin, France and Mexico.
Swara Laya organisers deserve kudos for mobilising a team of Sydney’s music teachers and students to kick off the festival with an innovation titled Kshetra Magimai and singing compositions and krithis in the praise of deities associated with the following dharma kshetras in South India, namely Thirukkadaiyur Abhirami, Kanchi Kamakshi, Madurai Meenakshi, Thirunelveli Kanthimathi, Chidambaram Sivakamasundari, Thanjavur Brihadambika, Thiruvaiyaru Dharmasamvardhini, Thiruvanmiyur Thripurasundari and Thirumayilai Karpagambikai.
Musical treats enjoyed by rasikas at the festival varied from orthodox styles at one end of the spectrum, to the unconventional at the other.  There were 10 major concerts where performing artistes sang 87 unduplicated ragas.  The other notable feature was the rendering of 16 rarely heard ragas such as Vairavam, Devamruthavarshini, Manoranjani and Nari Ritigowla.  There were several examples of individual brilliance, as with Nithyashree Mahadevan and Sanjay Subrahmanyan, among the vocalists.  P Ganesh on the chitravina (aka gottuvadyam) and playing solo; Srimushanam Raja Rao on the mridangam, and TG Muthukumaraswamy on the thavil excelled as accompaniments.  Among the team concerts, Mysore Brothers Nagaraj and Manjunath raised violin solo concerts to another level with their faultless and synchronised rendering of Manasa Sancharerey in raga Shyama and Rama Katha Sudha in raga Madhyamavati.
The vocal team of KN Shashikiran and P Ganesh sang a pallavi written and composed by Shashikiran and dedicated to the Sydney Murugan Temple in Westmead. The original creation was set to pancha raga and pancha tala.  It was a classic example of artistes expressing their bond with the city of Sydney.
Two other teams of vocalists distinguished themselves, receiving standing ovations from the audience. Hyderabad Brothers Raghavachary and Seshachary demonstrated their maturity by following orthodox traditions, but giving their listeners a peek into their prowess by rendering rare ragas like Kalkada, Jaymanohari, Vagadeeswari and performing a thillana in raga pahadi, composed by the late Lalgudi Jayaraman. Their detailed ‘sancharam’ in raga Shankarabharanam contributed significantly to the smooth flow.  It concluded the first day’s proceedings as the audience left for home completely satiated.
The crowning glory among the vocal teams must go to Ranjani and Gayatri who combined beautifully and complemented each other as they went on to analyse the nuances of Saint Thyagaraja’s Koluvai Unnade in raga Bhairavi.  Their ragam, thanam and pallavi in raga Amir Kalyani in praise of Lord Krishna with lyrics, Brindavana gana lola murali dhara was a case of oodles of melody, particularly as their ragamalika with four ragas embellished the concert.
The genius of Sanjay Subrahmanyam was amply evident as he tested his accompanists, Mysore Nagaraj and Srimushanam Raja Rao by venturing into uncharted depths in raga Gauri Manohari, where the pitch was challenging to his voice.  His ragam thanam pallavi in raga Shyama demonstrated his ability to go off the beaten track and it could easily be construed as the artistic licence to deviate from the norm.  His accompanists rose to great heights to match him, blow for blow.  Sanjay has all the makings of a musical great!
One youngster who rates a mention is Suchitra Balasubramaniam who entertained the audience by blending melodic singing and with folklore. Her Harikatha Kalakshepam gave everyone a peep into the lives of Andaal, Mirabai, the Rajput Princess, and the famous composers Sri Purandaradasa and Jaideva  and their poems in the praise of Lord Krishna and the other Vishnu avatars. Her discourse gave every indication of her confidence and a full knowledge of her subject.
TNS Krishna and Sri Unnikrishnan performed the other concerts and were duly applauded, but their style did not seem to gel with everyone.  This could easily have been due to stark differences in their approach.  Whilst Unnikrishnan is a seasoned performer, he appeared to be labouring to introduce interesting variations. His delivery was archetypal and his technique regurgitated. In case of Krishna, he is a young and talented performer with impressive lineage (he is the son of Sangita Kalanidhi Sri TS Seshagopalan), but he appeared to be in a great hurry to show his skills without any thought for the expectations of the audience. He will undoubtedly learn in due course, that public concerts are not instruments of self-gratification.
Among the quiet achievers of this festival were Poongulam Subramaniam and TK Murugabhupathi on the mridangam, HN Bhaskar, Mysore Manjunath and Nagai Sriram on the violin, and Chidambaram Suresh on the morsing.  Their performances as accompanists added lustre to each of the concerts.  Vandana Dixit and Ankita Manoharan did a splendid job of compering and introducing the concert artistes to the audience.
All credit for the success of the Sydney Music Festival goes to Mr and Mrs Kanagasabhai Jayendran and their family who have worked tirelessly to bring top artistes from India to perform here, initiating necessary actions to run a highly successful program.  Sydney’s Carnatic music lovers owe them a debt of gratitude.