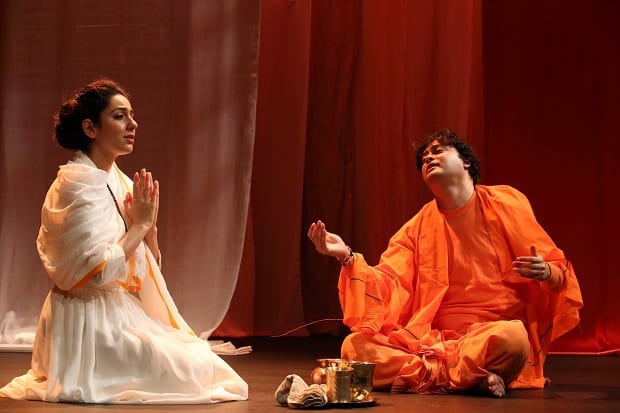 Reading Time: 4 minutesThe life and experiences of this renowned personality come alive in a  perfectly performed play. By UTTAM MUKHERJEE and JYOTI SHANKAR

“Sisters and brothers of America…” A crowd of 7,000 odd greeted these opening lines by Swami Vivekananda with a standing ovation at the Art Institute of Chicago on September 11, 1893; and so did a crowd on September 17, 2013 at the Sydney Opera House. The first venue was the occasion for the World Parliament of Religion held in Chicago; the second was the play, Oneness – Voice Without Form staged at the Playhouse Auditorium at the Sydney Opera House in celebration of the 150th birth anniversary of Swami Vivekananda.
The play was part of a wider celebration sponsored by the Sarada Vedanta Society of Sydney. Adjectives fail to describe the Swami completely, and it is hard for a commoner to fathom his awe-inspiring life experiences. So it was a mammoth task for the creators of Oneness to do justice to the influential teachings and eventful life of Swami Vivekananda. But they succeeded!
The idea for the play germinated in 2011 when Madhuparna Sen made a solemn promise to devote herself to the staging of a play on Swami Vivekananda on a grand scale. Considering the play was staged at the Sydney Opera House, it could not have been grander. From the days of its initial conception, Swami Atmeshananda and Pravrajika Gayatriprana of the Sydney Vedanta Centre provided major support and guidance to the project.
As the crowd poured into the auditorium, the actors sat around an almost statue-like meditative Swami Vivekananda, chanting hymns. The lighting, neither bright nor dull, truly set the ambience for the spectacle that was to follow. The story was played out chronologically starting with a young restless Naren (Bali Padda) in search of God and Truth, followed by the wiser Swami Vivekananda (Saheb Chatterjee).
The play captured the essence of Swamiji’s character and highlighted some of the well-known key experiences and events in his life. Anecdotes of Naren’s early days were narrated in different scenes by an understanding and loving mother (Suparna Mallick) and an anxious father (Carlos Sivalingam). The major influence in Swamiji’s life was undoubtedly Shri Ramakrishna Paramahamsa (Robert Rhode). This profound influence was life-changing for Swami Vivekananda, who in turn touched many lives.
One such life was of Margaret E Noble aka Sister Nivedita (Dana Dajani), who came to Kolkata from London to set up a school for girls.
It was as if the lead actor, Calcutta-based Saheb Chatterjee, was born to play Swami Vivekananda. He personified the humility, mysticism and sheer goodness of Swamiji with his outstanding and effortless performance. All the other actors performed well and it would be hard to pick one without mentioning the other. Twelve actors were selected from over 200 who auditioned for the roles, and came from different cultures. Dana Dajani is a Palestinian actor based in Dubai, Bali and Suparna are Indian Australians based in Sydney, Robert has a South African background, and Carlos is Sri Lankan. Isaro Kayitesi, on the other hand, who plays Maa Sharada is of Rwandan-Anglo-Australian descent. “‘We all are one’ is the basic premise of the play, and this is visually represented for the audience as well, with the diverse cast,” Maa says.
Many of the actors had never heard of Swami Vivekananda before, but were attracted to the powerful story and the opportunity to be part of a professional production that was to be staged at the iconic Opera House.
An interesting piece of casting was Tade Adepoyibias as Maa Kaali, as she is of Nigerian descent. John Gomez Goodway, of Filipino Australian background played the Swami’s earliest disciple Sadananda, and said he felt uplifted and empowered to work in a play about Swami Vivekananda who had such a life-force to him.
Julia Kennedy-Scott, playing Kate Sanborn, who takes the Swami under her wing, helping him to get to the Parliament of Religions in Chicago, says that his message was not about converting people but uniting them, a message so timely in today’s world.
Bali, a Sydney-based actor, worked in London for many years, as the opportunities for non-Anglo Saxon actors here was limited. This has been slowly changing and he said he was delighted to be part of this production which has a diverse cast, something rarely seen in Australian theatre. And the synergy between all was a strong point of this play.
Music and movement brought a different flavour to this well-known story. The creativity of the crew behind the scenes was equally brilliant. The use of space and lights on the stage was imaginative and effective. The original music was composed and played live by Kim Cunio and Heather Lee. Design and co-direction was by recent NIDA graduates, Tobhiyah Feller and Felicity Nicol, and the movement consultant was Adelina Larsson. The writer was Alex Broun, who has extensive experience working with some of India’s top theatre artists while establishing Short + Sweet Theatre Festivals in Delhi, Bangalore, Chennai and Mumbai. The play was jointly directed by Felicity Nicol and Alex Broun.
The theatre was almost packed to capacity. Although the crowd was from various nationalities, they appreciated the performance wholeheartedly. A moment of pure joy for many in the performance was when Saheb Chatterjee brilliantly sang a popular Bengali devotional song, Shyama ma ki amar kalo (Is Kali, my mother, really black?). His mellifluous voice reverberated in the auditorium and for a moment it was as if Swami Vivekananda had returned again after a hundred and fifty years.