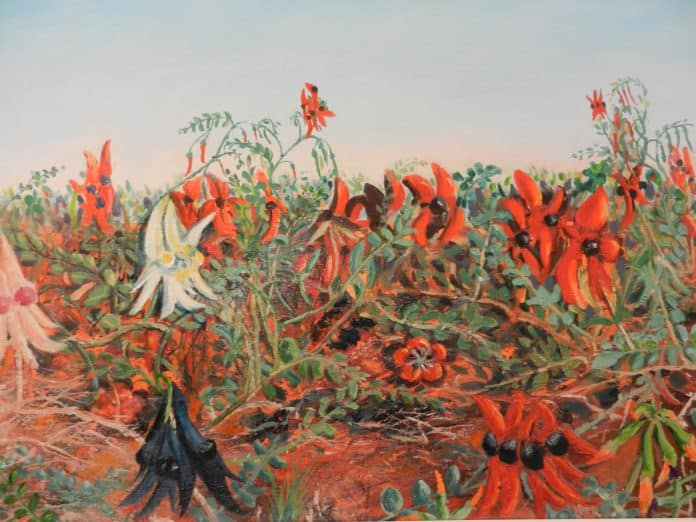 Reading Time: 3 minutesIt’s not unusual to find medical doctors having a symbiotic relationship with the arts. For Dr Sam Gue, painting is the art form he has been drawn to over the years. He grew up in Rewa, UP, and studied Obstetrics and Gynaecology in India before heading off to the UK to pursue surgery.


Eventually, he moved to Broken Hill as a consultant. During his practice in the Australian outback, Gue met one of the ‘Brushmen of the Bush’, Jack Absalom. “I operated on him one time and since then, we became really good friends,” says Gue. “He’s the one who introduced me to the basics of painting.” Bush artists taught him how to stretch a canvas and put on the first coat of white paint but other than that he is entirely self-taught.

As I sit in his lounge room my eyes are drawn to his paintings hanging all around us. He muses, “Despite a busy life I took up painting, and it went on to became my second love. It helped me to relax from the busy, 24-hours-a-day arduous demands of surgery that can be quite stressful.”
Interestingly, many of the paintings have a story behind them. Some paintings are Gue’s purely personal interpretations of mythical and historical stories from India, some are landscapes and others are seascapes. One painting, for instance, is a result of his journey by train on the Indian Pacific to attend a conference in Perth. He was struck by the beauty of the stark and harsh bush landscape and claims it intrigued him to no end. “After falling in love with the red earth and blue bushes, I never had the opportunity to spend as much time with my favourite surrounds as I would have liked. But I can reflect on my work as if I am still in those peaceful surrounds.”

Surprisingly, Gue prefers oil colours to watercolours despite the ease of the latter. For the doctor, the complexity and challenge of painting in oils brings its own reward. “My oil paintings are layered with a palette knife to get a 3-D effect. I can build it up,” he explains, disarmingly admitting that it is easier to cover up mistakes or changes of mind as “you can just paint over them”.
His painting Father Showing his Daughter their Land gives me a peek into Gue’s closeness to his Aboriginal friends. Bungle Bungles with Wild Flowers and Billabong is a delightful and stylised depiction of this World Heritage Site. And the Barrier Reef – Turtles, ColoUrful Fish, Sea Horse, living in Harmony is a good example of his versatility.

In March, Gue even held an exhibition of his oil paintings at the Royal Australasian College of Surgeons Building in Adelaide. The chief guest at the exhibition was His Excellency Hieu Van Le, the Governor of South Australia.
When asked if paintings show the soul of the artist, Gue pauses for a moment before replying, “You put everything you have in your painting. I start painting and I forget everything.”
Undoubtedly, his patients will remember him for his surgical work and others for the memories and pleasure they get from his unique paintings.
- Advertisement -
Share
WhatsApp
Facebook
Twitter
Linkedin
Previous articleDelhi team wins $1mn XPrize for safety device inspired by Nirbhaya
Next articleChennai developer's app wins Apple design award