A new playwriting project tells poignant, cross-cultural stories of love against the backdrop of migration, by HAMIDA PARKAR 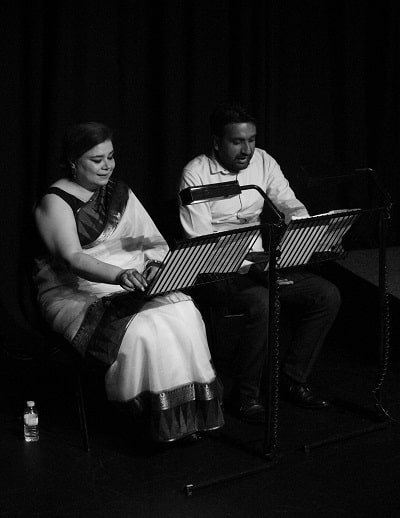 Reading Time: 4 minutesA rainy evening at Riverside Theatre, Parramatta, provides the ideal backdrop and stage for three diaspora play readings, written by Kevin Bathman, Roanna Gonsalves, and Sonal Moore. Guided by John Suter Linton, it was the first public outcome of their effort as part of Drama-Sutra, a playwriting project, led by Neel Banerjee of Nautanki Theatre Company.
Narrated with warmth, candour and humour, these untold stories are an amalgamation of past and present. They depict the joys and challenges of migrants with love, even as they trace cultural, social and political barriers, giving voice to their struggles of accepting, redefining and/or establishing their dual originality, independent of kin or country.


The content is rich and poignant. Fantastic voice performances from actors make the performances compelling. Yet the playwrights insist these are first versions. Roanna quips, “You all are our guinea pigs.” Her story is fictional, while Sonal and Kevin draw inspiration from real life.
In Fish Out Of Water, Malaysian-born Kevin dishes out wonderful slices of diasporic lives from his own background. “My Indian-born paternal grandfather moved to Malaysia in the 20s, where he met my Chinese grandmother,” he says.
Three mixed-race Australian couples share true Chindian (Chinese-Indian) stories. He uses verbatim theatre to convey feelings, “What you hear are actual words of these real couples”. The pairs talk about moving, reactions to their distinctive relationship, family, conflicts, and a better future for their children. “I have always been an advocate for such stories. Chindians aren’t recognised in Southeast Asia and don’t fit in either category,” shares Kevin.

Indian-born Roanna’s contemporary The Queen’s English is a witty and socio-political commentary on immigration, she borrows from her 2016 book The Permanent Resident (which last week won the Multicultural NSW Award at the 2018 NSW Premier’s Literary Awards) and Masako Fukui’s Late Life Sex. Adding hilarious matriarchal character, Isabella, to the dinner party, Roanna touches on feminism, sex, religion, culture, racism, assimilation, plus migrant dilemmas on employment, housing, permanent residency, and student visas. She hopes to change the depiction of an Indian in Australia, moving it from the lens of cricket and Bollywood to being more realistic. “The current government, or even non-Hindus, have a narrow view on Hinduism when it is diverse, beautiful and accepting. Millions of stories become one story, impoverishing all of us to tragic consequences as we are seeing in India as well. Our stories hope to show different ways of being Indian, and Australian. They are Australian stories, and also Indian. They can be both. We don’t have to choose.”

Ten Years To Home playwright Sonal feels wholly Aussie, being born and bred here. “I never thought I had an Indian story in me, despite my Indian parents,” she says. “They gave me my background and my friends gave me everything else.” Yet her account of her folks’ journey from her (late) mother’s perspective – spanning 10 years – is stunning. It captures her thoughts from being an early migrant to making Australia home. One exquisite scene journals her mother looking out of the window, watching her son play as she reflects on her old life. Crucial periods are captured of a changing India and Australia in the ’60s and ’70s.
Losing these legacy stories would be tragic. The hope is to find these plays a home on the Australian stage, with mainstream funding and production. Neel’s passion is evident. “No text exists, or dominates the migration of South Asian diaspora. We hope to receive support from the government, council and community members,” he says.

“Writers or actors like us don’t have access to mainstage theatre companies,” says Roanna. “It is difficult for actors who are not white. They don’t find work. So an opportunity like this is rare and precious.”
“This is special for me, and a chance to tell my parents’ story,” says Sonal. “We all need to get our elders writing and sharing their lives, otherwise communities are going to lose their family stories, our traditional stories.”
- Advertisement -
Share
WhatsApp
Facebook
Twitter
Linkedin
Previous articleHiguita: A goal keeper’s solitude
Next articleModi-Xi meet: Are India and China 'friends' again?