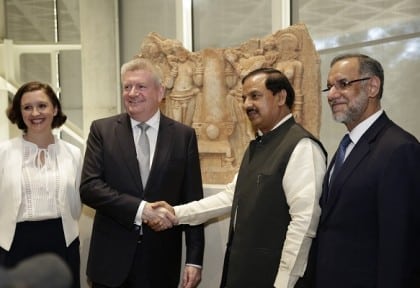 During the recent visit of India’s Minister of State for Culture and Tourism Dr Mahesh Sharma, Australia’s Minister for the Arts, Senator Mitch Fifield formally returned two statues to the Government of India from the National Gallery of Australia’s Asian art collection.

In a special event at the National Gallery of Australia (NGA), Senator Fifield formally handed over the three ancient statues, The Seated Buddha, Goddess Pratyangira and Worshippers of the Buddha.
Receiving the artefacts, Dr Mahesh Sharma said, “Our sincere thanks to the Government of Australia and Prime Minister Malcolm Turnbull and Minister Mitch Fifield and the National Gallery of Australia for the gesture of returning these three antiquities, which will carry a big message of the relations between the two countries.”
Senator Fifield said in a statement, “The statues have been significant items in the National Gallery’s Asian art collection and treated with the utmost care while in Australia, but as significant examples of India’s heritage, the statues will be returned.”
“The work between our institutions and governments leading up to this return is a demonstration of Australia’s close relationship with India,” he added.
On Twitter, Dr Sharma thanked the Minister for his “kind gesture” saying, “This means a lot to the people of India. These sculptures have emotional value for Indian people.”
He also tweeted, “The journey of three ancient artefacts back to their home begins. They will be placed where they should be – The National Museum.”
Also in attendance at the Indian sculpture repatriation ceremony were the Indian High Commissioner to Australia His Excellency Navdeep Suri and top officials from the NGA.
“We welcome the return of these sculptures and commend the National Gallery of Australia for its approach to dealing with this complex and difficult issue,” Mr Suri said.
The artefacts were part of a selection of items allegedly stolen and smuggled out of India through an illegal art smuggling ring operated by disgraced art dealer Subhash Kapoor. Goddess Pratyangira, a 12th century stone statue from Tamil Nadu, and Worshippers of the Buddha, a third-century rock carving from Andhra Pradesh, together valued at $1.1 million, were purchased by the NGA in 2005 from the New York-based dealer.
The Seated Buddha was purchased from Kapoor by Rosalyn Packer for the NGA in 2007 for more than $1 million, but it subsequently emerged that the statue was stolen from an Indian archaeological site. The 2nd century statue is from the Kushan period.
During then Australian Prime Minister Tony Abbott’s visit to India in 2014, the Australian government returned the statue of the ‘Dancing Shiva’ to Indian Prime Minister Modi. The 900-year-old bronze Shiva Nataraja, purchased for $5 million in 2008, was another artefact found to have been acquired by Kapoor through illicit means, before being sold to the NGA.
Dr Mahesh Sharma was in Australia on an official visit as part of the Confluence Festival of India in Oz. He also conducted a series of bilateral meetings with Senator Fifield, as well as Australia’s Assistant Minister for Trade, Tourism and Investment Keith Pitt MP.