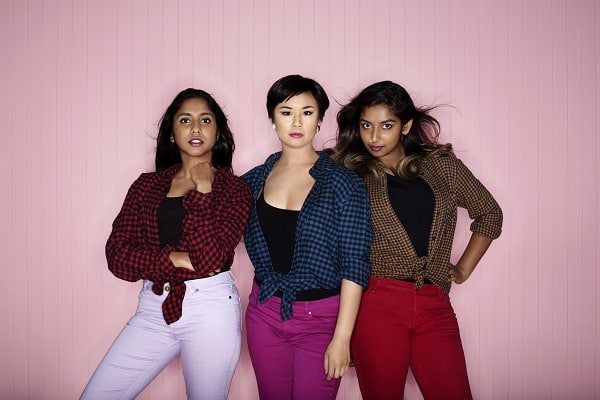 Reading Time: 3 minutesWhy Why Why
Do the lesbians always die?
This is the refrain of the ‘Dead Lesbian’ chorus in Jean Tong’s Romeo Is Not The Only Fruit: three women in white t-shirts, each bearing the method of their death – Stabbed, Strangled and Sacrificed.

Played by Sasha Chong, Nisha Joseph and Pallavi Waghmode, they are satirical, jaded, angry, witty but still romantic queer women who spend the show trying, unsuccessfully, to thwart the star-crossed meeting of Juliet (Margot Tanjutco) and Darcy (Louisa Wall) – because, as they tell us, lesbian love stories always end “in the death of one or both of the lovers…we have to die so we can’t breed!”
Writer, director and lyricist Jean Tong explains that the creative team are young, queer and want to party while opening up pathways into shifting the state of representation as it currently stands, “It’s 2017 and the world is still telling the same, tired old story about queer people of colour and our access to spaces.”
These queer women of colour are definitely not telling a tired story. What is tired, as the whole show makes clear, is the way classic love stories are still centred around ‘boy meets girl’, and often ‘white boy meets white girl’, with queer characters and characters of colour either literally bringing up the rear, or being thrown under the plotline’s figurative bus.
“Whether on the news or on Netflix, we’re still watching ourselves die for someone else’s happiness, someone else’s comfort. Romeo Is Not The Only Fruit is a tongue-in-cheek, fist-in-air response to this, because we’re pissed off, charming, hilarious and write catchy songs,” said Tong.

From making the white Darcy a ‘minority’ in the town of Verona (“where are you really from?” she is asked seriously by Juliet’s Malaysian grandmother, after which the women sing ‘We are so…we are so…not racist”), to parodying “Performance Art”, to the giant colourful cardboard props for everything from food, drink, and coffins, Romeo… is brilliant from start to finish. The actors thump, sashay, stalk and camp across the stage, and the songs are swinging, faintly Disney-like, yet irreverent. My absolute favourite would have to be Mumma knows best, where Juliet’s mother gleefully plans to poison Darcy with spicy dumplings, and literally dances with the ingredients as she does so.
Swirling with references Shakespearan, Austenian, pop culture and subculture, in this tale, Juliet is Juliet Wong who falls in love, not with Romeo, but the recently heartbroken newcomer Darcy White (whose previous girlfriends, Emma and Lizzy, both died, as lesbian lovers always do). Juliet dreams of being a pilot but is harassed by her bitter mother and clucky grandmother to “find the right man”. Peppered with rom-com tropes – the meet-cute, the disastrous family meeting, the argument – Romeo… delights with its wit, its unabandoned sense of the absurd and the melodramatic, and most of all its ‘Dead Lesbian’ chorus, always on hand to heckle, worry and quip us through the twists and turns of the story of the star-crossed lovers, as well as drop truth-bombs about the reality of being lesbian and in love.

And the moral of this “story about stories”?
Romeo is definitely not the only fruit.
Queer women do meet-cute best.
And… despite the “heteronormative maze” that is still contemporary love stories….
The lesbians don’t always have to die.