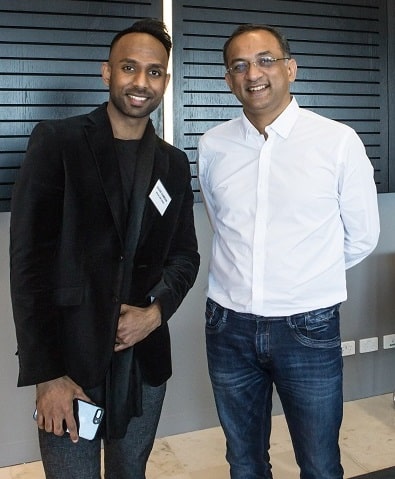 Reading Time: 3 minutesCandid, funny and engaging. That’s how the Bollywood-wale turned out to be, up close.
IFFM’s Masterclasses were held at the iconic Deakin Edge at Federation Square, the design of which even Karan Johar claimed to be amazed at, as soon as he entered the room. But more about him later, given he was the real star everyone wanted to see. Some clever scheduling saw KJo take the last slot in a day filled with interviews, but that’s okay; we got to hear first-hand from many different leading Bollywood folk that day, as they opened up about their craft to Rajeev Masand, film critic and media personality.


Fashion-designer-turned-film-director Vikram Phadnis spoke about his debut film Hrudyantar. “I wanted to break people’s perception that fashion designers can only make movies about fashion,” he said. Vikram also shared his love and respect for actor Salman Khan. “I’m indebted to him, if he tells me to stop making films, I will,” he remarked. Hmm, many decisions in Bollywood are made from the heart, rather than the head!
Bollywood critic and trade analyst Taran Adarsh let slip that Bollywood producers ‘fear’ Hollywood, while talking about the changing dynamics of the Indian Box Office. The interview was conducted by festival director Mitu Bhowmick Lange who asked for Taran’s thoughts on the dreaded “N” word. “There’s no discrimination in Bollywood,” Taran replied, and added, “I’m not for nepotism, I am not against it either.” In a strange way, it was clear what he meant: the industry will never really be rid of nepotism, given its leading actors come from generations of film-makers and in whom the talent is koot koot ke bhara hua, to borrow a term from an SRK hit film.
Bahubali producer Shobu Yarlagadda then sat down with Rajeev Masand, talking about Indian folklore on celluloid. “My biggest concern wasn’t that both the movies Bahubali 1 & 2 should do well, for me it was the budget in which the projects had to be completed, and the timelines in which we had to do that.” Shobu added, “Movies should be like an (experience) that the whole family and friends should look forward to.” The Khans better be reading this!

Director of Dangal, Nitesh Tiwari, talked about taking stories from real life to the silver screen. He was asked the obvious, how his hit movie ruled the China market. “Emotions and relationships are universal, this effected the most in China,” he replied. He also shared some insights from the Aamir Khan film. “The father-daughter fight scene convinced Aamir Khan to gain that massive weight; otherwise Aamir Khan wanted to be a George Clooney built wrestler.” George Clooney, a wrestler? I sense a Hollywood disagreement here…
I was taken aback when the director of one of my favourite Bollywood movies Piku, Shoojit Sircar revealed, “My films don’t belong to Bollywood.” Apparently, he is used to having his scripts being rejected by actors, but getting an okay from Amitabh Bachchan for Piku was something he never expected. He gave nothing away for his upcoming film October.
As Rajeev Masand welcomed the man of the event Karan Johar, the audience had grown to its largest. Well, why not – the dude is Bollywood royalty. Rajeev went straight to the question bugging B’town: Will Kangana Ranaut ever appear on Koffee with Karan again? “I would love to have anyone on my show that can benefit from the show,” the articulate Karan replied, but added, “The ones that don’t come on my show in future, will be the ones that won’t be (around).” Gulp!
Karan also shared, “I’m really confused for my next film; I need to make it a commercial success.” So Ae Dil Hai Mushkil wasn’t a success…? Of course we all wanted to know about Karan the father. “Being a father of two kids has opened up my heart… It will impact my cinema for me. There will be layers in my next film that will explicitly portray the humongous level of excitement that Yash and Ruhi (have brought into my life).” Which I thought was adorable.
Was Karan Johar candid? Probably not, he was very safe – way too safe – with his answers. And yet, he officially promised to host the Westpac IFFM Awards next year!
- Advertisement -
Share
WhatsApp
Facebook
Twitter
Linkedin
Previous articleLost in Tokyo
Next articleDYK these facts about Hindus in Oz from Census 2016?