Ankitha Shashidhar wraps up her Bharatanatyam arangetram with finesse 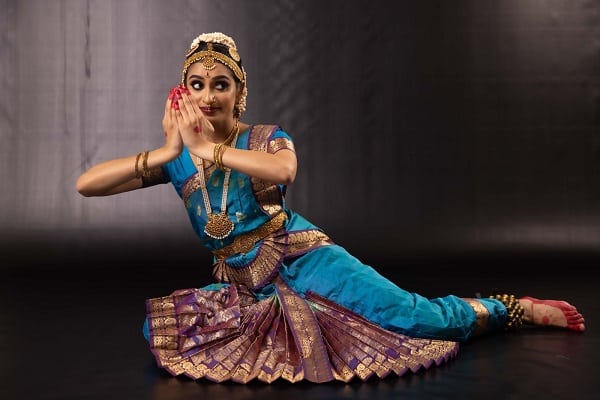 After watching Bharatanatyam dancer Ankitha Shashidhar present her arangetram (debut), one couldn’t help but ponder over the serendipity of her name. It is Sanskrit for ‘marked for prominence’.

Take for instance her Varnam, or the centrepiece of the recital, Mathe, Malayadhvaja Sanjathe. A well-known krithi in raga Kamach, many singers have sung it and brought out its grandeur. Interestingly though, this number holds immense potential for a dancer – magnificent diction, chittai swaras, jathis and fluent sancharas, apart from many other characteristics.

It was heartening and pleasing to watch the winsome Ankitha bring out brilliantly the various shades and depths of this masterpiece.

A dancer’s abilities are said to be tested during a Varnam, a mix of Nritya (pure abstract dance) and Abhinaya (acting). Ankitha shone through with flying colours, as an avalanche of mridanga beats, jathis and swaras came at her. She matched each, quite skilfully, with her beautiful and intricate movements.

Arms, hands, wrists, legs, ankle, feet, eyes, lips, all performed in unison to heighten the experience. Sparkling with glee, she covered the entire stage with her rhythmic footwork.

Mathe essentially speaks of goddess Meenakshi and brings out various aspects of her personality. Accordingly, in

the Abhinaya segments for this item, the tales and legends of the deity were enacted by Ankitha. Meenakshi could be Shakodari, Shankari, Chamundeswari, chandrakaladhari, thaye, Gowri. She is sometimes a lover, occasionally a caring mother, and at times, she is the very destroyer. I vividly recollect Ankitha channelling Chamundeswari tearing up the demon’s body, roudra oozing out of her face. Yet, in the end, she stood as Shukapani (one who holds a parrot in each hand). After all, she is Sakala Bhuavana Sarvabhoume, isn’t she!

Ankitha Shashidhar is a disciple of the acclaimed dance teacher Sashi Bala at the Natyadarshan School of Dance in Sydney. A graduate in Media (Public Relations and Advertising) from the University of NSW, she is the daughter of Anitha and Shashidhar of Sydney.

If Mathe was the highlight of the show, another item that stood out was the Padam Bho Shambho, a composition of Swami Dayananda Saraswathi in raga Revathi. It addresses Lord Shiva, who is the redeemer and purifier of human beings. This number started slow in pace and built up as the swaras and jathis joined in. Ankitha’s dance converged with the melodious voice of Namrata, the great flute and violin background, mridanga beats, the outstanding lyricism of the composition, and the pervading raga, in creating a sublime experience. The spellbound audience could feel the impact of the item when Ankitha danced to nija guhanihita nitAnta ananta ananda atishaya akSayalinga. It reached a grand climax to finish off.

The performance had other items as well. It started with Pushpanjali when Ankitha danced to Sri Vignarajam Bhaje, followed by Natesha Kavithvam and Jathiswaram in Ragamalika. It was a treat to watch Ankitha dance to the pure notes – Sa ni sa ri saa nida pa da ni, da pa ma gaa, ma pa da ni saa. In Baro Krishnayya, one saw an enactment of the episodes of Bali, Vidura and Muchkunda. The item reached its peak with the reverberating words Dasa ninna pada dasa. The padam Kadai Kann Parve, also ended dramatically. Ankitha’s repertoire also included Srinivasa and Thillana, both in raga Hamsanandi.

All through the performance, the accompanists provided lively support to the dance. There were entertaining dialogues between the vocalists and flute, violin and Mridangam. Namrata remarkably rendered Thamburi Meetidava, an interlude between items.

Watching youngsters such as Ankitha Shashidhar on stage gives us hope that the ancient classical art of Bharatanatyam will live on forever. Indeed, her very name says it all.

Best live theatre shows to catch in Sydney and Melbourne