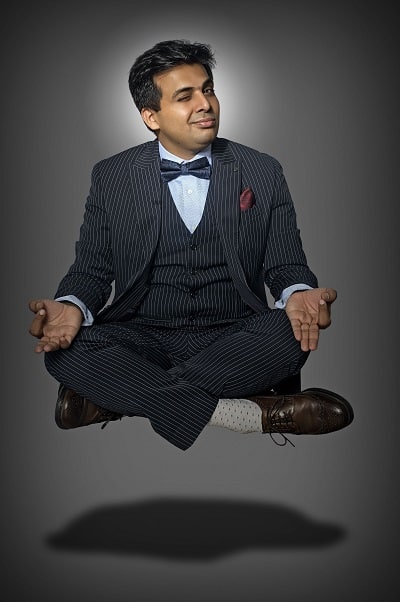 Waves of laughter hit the Whitehorse Centre recently, as he connected with the audience through highly relatable content.
Presented by Showkraft Entertainment, his sold out, tightly packed show in Melbourne guaranteed a night of entertainment and honoured it.
From the minute he walked in, unassuming and sans fanfare, you immediately liked the man. As the show progressed his relaxed delivery and entertaining jokes made you like him more. By the end of it your cheeks hurt from laughing and you’d joined the thousands already in Tandon’s fan club.
This was one of those rare comedy shows you could safely take the kids along. Parents, spouses, and children; no relation was spared in Tandon’s repertoire of family friendly and remarkably clean jokes.
It was a drive down memory lane for many in the audience as Tandon navigated through India’s precarious roads, rickety marriages, potholes of parenting and other ‘Indiosyncracies’.
He managed to engage the audience without resorting to foul language, risqué jokes or picking on anyone in particular.
According to Amit Dutt who attended the show, “I think it was great. It’s not easy to provide an hour and a half of non-stop punches based on observations of everyday life, which the audience can relate to and still keep it free of double meanings and adult humour.”
“He is funny and I don’t think the audience could get enough of him,” continued the newly converted fan. “I found him very humble, dealing with the meddlers and offering rejoinders. I think he stood apart from others as he was able to connect easily with the audience.”

Tandon’s skill at improvisation was challenged by some rather unnecessary, attention seeking comments from the audience. He handled them diplomatically and provoked mirth rather than ire with his responses.
Tandon is a seasoned performer who has done over 700 shows and has an impressive line-up of performances scheduled in the US and UK. He is the founder of Grandmasters of Comedy that brought comedy to the corporate world in India.
He was the runner up at CEO’s Got Talent TV show and is responsible for bringing a comedy face-off show from Singapore called the Fight Comic to India.
While Tandon’s brand of comedy appealed to a wide range of people there wasn’t much for those not familiar with the country and its sensitivities.
With material based predominantly on ‘growing up middle class in India’, he lost the already short attention of the Millennials somewhere through the show. Not that there were too many of them in the audience in the first place
His target market of first generation non-resident Indians, however, were in splits for most of the evening over his compelling humour.