The star of the hit Paramount+ show discusses the new third season. 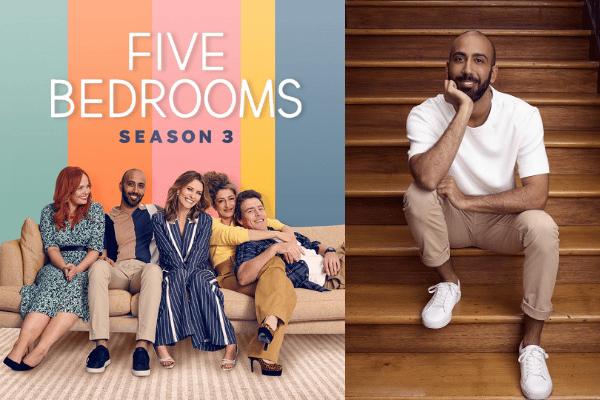 While we all had more than enough reason to celebrate the New Year, actor Roy Joseph had particularly good cause to. For him, 1 January 2022 meant the release of season three of Five Bedrooms, the hit Australian drama in which he plays the role of Harry.

Streaming on Paramount+, the show has a rather comedic premise: after a few too many drinks, five unlikely friends decide to get into the property market, buy a house, and live in it. A lot of crazy incidents take place, but in the end, they find both a home and a family within each other.

Labelling the quintet as “unlikely friends” is an apt description. There’s Liz (Kat Stewart), a lawyer fresh out of a rough divorce; Ben (Stephen Peacocke), a tradie considered by his new housemates as a ‘man-child’; Heather (Doris Younane), an aged-care nurse in the midst of a mid-life crisis, Ainsley (Katie Robertson), a real estate agent and romance tragic; and Lachlan (Hugh Sheridan), who is going through a rough patch with his wife Melanie.

Rounding out the lead cast is Joseph himself, whose character Harry (“shortened from Harpreet”, he says) finds success as a neurosurgeon, less so with sharing his LGBT identity with his conservative mother.

“What I love about the story is that it doesn’t shy away from the fact that in [Indian] families, coming out can be difficult to navigate for both the parents and the child,” Joseph tells Indian Link.

“But it didn’t just show the pain and the suffering. It also showed that people can accept things in those they love more than anyone in the world, and I think that’s what we see with Manju [Harry’s mum] and Harry. The relationship between the two of them is so strong and beautiful.”

Playing this complex character might sound tough, but not for Joseph. He felt from the first audition that he “knew the character and how to play him”, connecting with Harry’s loyalty and confrontation skills in particular.

But that didn’t mean that Joseph knew everything about his character’s lifestyle. In fact, one of the more interesting stories he shares about his time on set is about his discovery of Diwali.

“I was born in Israel and my parents are Jewish, so I was raised culturally Jewish. We didn’t celebrate any traditional Indian holidays. When we filmed a Diwali episode in season two, I didn’t know anything about it,” he confesses.

“It was amazing to sit there and be a part of the ceremony as it was being filmed; I felt very privileged to tell that story and represent it in an authentic way.”

It seems discovering Diwali was part of the catalyst for Joseph’s evolution as an actor.

“[Since season one], I’ve learned that I’ve stepped in the right industry for me. I love every single day I’m on set and filming.”

He adds, “I’ve also learned to reconnect with the softer part of me; the part that’s more anxious. Lots of people deal with anxiety and avoiding or pretending like you don’t is not helpful.”

With the third season of Five Bedrooms now streaming, Joseph is taking a well-earned break from acting for a short while. But he’s got plenty of advice to up-and-coming actors of colour.

“Don’t give up. It’s easy to be disillusioned with the industry, but don’t get yourself down. There are so many people doing good things and putting in the work to try and change the way this industry represents people,” he says.

“Also, remember that we need to work twice as hard for the same recognition, and see that as an opportunity to be better than you could have been.”

And a final piece of advice?