There’s spellbinding promise in the Bharatanatyam debut of Dhanya and Pratiksha.

In an interesting moment in Dhanya Dinakar and Pratiksha Chuttar’s recent arangetram (debut performance), the duo moved gleefully to embrace but stopped short, creating an honest reflection of the new normal during COVID times.

It was a unique way of contemporising a Bharatanatyam sequence, in an arangetram ceremony that was already modernised by presenting for debut not one but two young artistes.

An increasingly common occurrence today, the joint arangetram might even have some artistic advantages, such as allowing the debutantes to exhibit their skills in solo as well as duet performances, indeed even in groups.

In their maiden rendezvous, the dancing gazelles Dhanya and Pratiksha convincingly portrayed lovelorn nayikas in the Padam; the cosmic dancer Lord Natraja in Natesa Kavuthavam, and epitomised the consciousness of Shiva-Shakti in Varnam.

Adorning alluringly coordinated costumes, Dhanya shone exquisitely as if the sun in orange and Pratiksha enchanted in royal blue. Together they transported the audience to an era that is traditional and mystical, timeless and divine, owning their presence confidently like two sides of a coin distinguished yet reliant.

It was the solo numbers however that went on to become the stand-out pieces at this event, a chance for the double delight to prove their mettle, announce their arrival with fanfare.

Dhanya in her solo embraced maternal love portraying the ‘Vatsalya Bhava’ in Krishna Nee Begane Baro set to raga Yamankalyani. From dressing up little Krishna in the finest to being bewitched at the sight of the entire universe in his mouth, the piece was an affirmation of Dhanya’s talent as an able interpreter of emotions. A stellar choreography, in which she was the mischievous Krishna eating the soil one instant, and surprised, gullible Yashoda in another. She performed, she conquered.

Pratiksha’s innocent romance with Krishna in her delightful solo reflected a glimpse of her own personality in Kanna Mani Vanna set to raga Kamas. Pratiksha as Radha falls asleep while awaiting the return of Krishna. She wakes up with a jerk and he is still not in sight. Dismayed and angry, she questions him about his whereabouts, Krishna’s indifference to her plea further infuriating her. Dazzling in the role of exasperated Radha, Pratiksha stole the hearts of the audience.

The Varnam Sami Nine in Raagamalika on Lord Brahadeseshwara -the presiding deity of the big temple of Tanjore – gave ample scope for Dhanya and Pratiksha to highlight their competence, endurance and range as dancers. Set to intensive footwork, skillfully executed to thunderous applause, the duo transformed into distressed nayikas seeking union with the supreme almighty, conveying the true yearning of the soul. Creating a visual spectacle with the genius of mridangam master Janakan Suthanthiraraj’s perfect rhythmic timing and Guru Aruna Gandhi’s impeccable natuvangam flair, this piece was a perfect congruence of wills and talents.

Revivifying snippets from Ramayana in a soulful bhajan, the dancers depicted with innate honesty Rama breaking Lord Shiva’s bow to win Sita’s hand in marriage, and Shabari’s wait to get a glimpse of her saviour. This piece was a testimony of the dialogue between Dhanya and Pratiksha through the vibrant sounds of their ghungroos and coy stolen glances. The lilting and resonating vocals of Namarata Pullapaka and the mesmerising violinist Kranthi Kiran Modigonda added depth, dimensions and life to this recital.

The evening ended with a vivacious Thillana and Mangalam and presentation of certificates of achievement to the two enchanters, as their parents beamed on stage. The pride and joy in the eyes of the parents, and the humility in the demeanour of the dancers, brought in a glow of warmth to this experience.

This was the second arangetram for Silambam Sydney, an acclaimed classical dance school that inspires many artists to lose themselves in the rhythms, tunes and divinity of Bharatanatyam. Pratiksha and Dhanya under the able tutelage of their Guru Aruna Gandhi graduated with excellence. Their arangetram validated the faith of proficient dancer and artistic director Aruna, who excels in passing on the nuances of Bharatanatyam to her students.

When asked about one major take away from this arangetram the dancers observed, “It’s the realisation of our devotion for Bharatanatyam being eternal.”

A love affair that we hope will prosper with time. 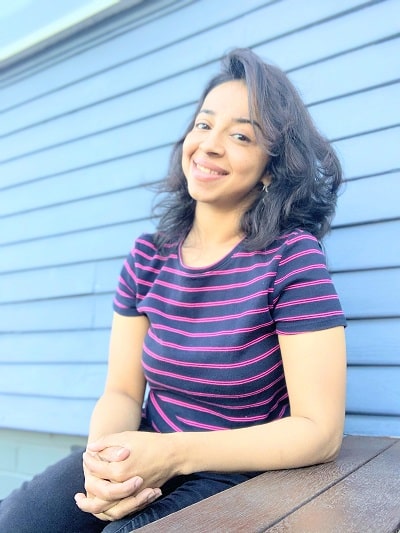