Speaking from the skin 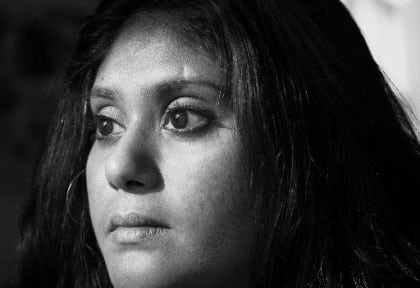 Rosalyn D’Mello reads to us. When she was 12 and self-conscious, she would stand in front of the mirror every night and stare at herself. Then she would say a prayer before sleeping.
There was only one thing I wanted most of all.
Beauty.
I prayed for beauty.
Since she was young, she’s experienced total strangers coming up to her and calling her “Kali” (“black”) – the consequence of India’s rampant and unrelenting obsession with fair skin.
But as she grew older, D’Mello began to derive strength, not shame, from her skin. From the fact that it hid blemishes, that it made her stand out as unusual.
“It also became my muse on so many levels…it made me feel empathy towards anyone or any race that has suffered on account of blackness.” She continues to write from her body to express the way her ‘self’ interacts with the world, and “absorbs [it] into [her] bloodstream”.
I heard Rosalyn D’Mello speak recently at two panels at the Melbourne Writers Festival, both focused on women and writing, ‘Walking Towards Ourselves’ and ‘The Artistic Lives of Women’. Her reading above was from her contribution to the anthology Walking Towards Ourselves: Indian Women Tell Their Stories, edited by Catriona Mitchell and published by Hardie Grant.

D’Mello, a widely published, Delhi-based, freelance art writer and self-described “dark-skinned feminist”, has also recently published her first book, A Handbook for My Lover, a work that is generally described as an ‘erotic memoir’. And indeed, in documenting six years of her relationship with a much older man, the book is about her awareness and experience of desire and lust. However, it is also much more than that – as she said, it’s just as much about “a woman kind of coming into her own… a woman conscious of her desire to be a writer.”
Despite the bold and unconventional content of the book, she also spoke of her discomfort at it being called a “brave book”; she is wary of this kind of label taking away from its literary merit, and of the tendency for women in particular to be “weighed down” by such categories. In India, for example, despite her extensive and critically acclaimed freelance writing, she’s known now as a “writer of erotica”.
Being referred to as a ‘woman writer’ is also irksome.
“When, as a woman, you do decide to follow your vocation and live the life of a writer or an artist you do get slotted in a certain way,” she says. “That can be a trap…because I don’t hear men being referred to as ‘male writers’.”

In writing so freely from her body and senses, she hopes to be able to show young women “what is possible”. D’Mello herself was inspired to take up the writing life by courageous writers like Kamala Das and Urvashi Butalia, who have made real differences in the lives of women through their writing and activism.
I am so struck by D’Mello, not just because – notwithstanding her understandable reservations about the term – hers is a courageous book and a fearless outlook on writing the self, but because of her passionate interrogation of her own writing process. She spoke of how, in writing A Handbook For My Lover, it took her some time to find the right tone in which to write, as a feminist, about being “besotted”; to find “a tone that was not subservient, not overly worshipful, a tone that was critical of him, a tone that could kind of represent him and yet be true to myself.”
Her younger self learned how to be true to herself with a new prayer.
I stopped asking for beauty. I asked for wisdom instead.
It has made all the difference.