Sounds of the monsoon 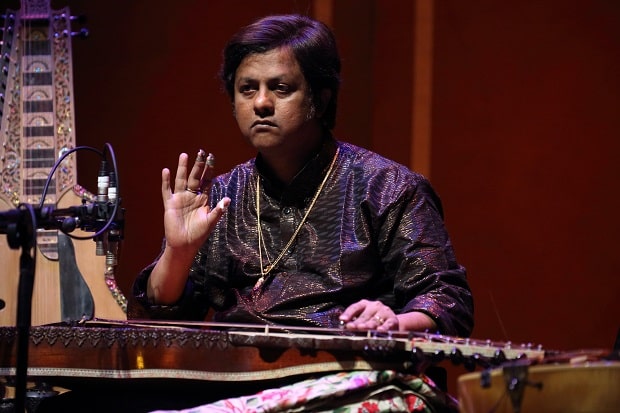 Classical musician Debashish Bhattacharya was the sole Indian invitee at the recent International Guitar Festival in Adelaide. He played to a packed house who gave him a standing ovation at the end!

Pandit Bhattacharya is known for the unique instruments he has invented.

“I got my first guitar at the age of three,” he told Indian Link. “I loved it, but thought its sound was somewhat foreign. The sitar, sarod, sarangi appealed more, as the original voice of my culture”.

Then began a journey of passion, training in lap slide guitars, classical Indian guitars and 35 years of experimenting with changing guitar strings and positions of keys to suit Indian ragas. The result has been the invention of 19 different slide guitars that you can play just about anything on!

Pandit Bhattacharya told Indian Link, “All my guitars are very special, but of these, three are very successful. They are being used all over the world by guitarists. I have named them Chaturangi (a 24-string guitar); Gandharvi (a 14-string guitar) and Anandi (a 4-string guitar). These I call the trinity of guitars or tri-nayans”.

He used all these three and one other at his concert in Adelaide last month. The evening began with Debashish Bhattacharya’s beautiful introduction to his music which, he said, he would like to give to people with “darkness in their hearts” to heal them and soothe them. Music is all about the expression of the “human mood” he said, and it certainly was! Debashish was accompanied by his daughter Anandi on vocals and Subhasish Bhattacharya on the tabla.

The first item of the concert was a rendering of raga Yaman by 16-year-old Anandi. With a teenager’s fresh voice, a little raw at the edges but showing the anticipation of an exciting adulthood, Anandi started off with some feet-tapping bols and moved effortlessly into the high notes – drawing out the best of dancing Yaman melodies. Debashish stayed very much the accompanist, adding to the singing, taking his cues from the singer and letting the music flow.

Anandi continued into a new song, again in raga Yaman and delineated it beautifully. As I sat back and closed my eyes to listen to ‘Main bhali mar jaaoongi pritam bina pyare’, the accompanying guitar sounded more like a sitar, and yet not a sitar. Traditional raga, universal music.

When Debashish introduced the next raga Desh, he asked us to visualise the monsoon in India – warm humid weather, highly perfumed beautiful white flowers, nature waiting for the rains to fall. This raga was played on the 24-string Chaturangi he created in 1978. His intricate playing, with a variety of sounds, kept all the monsoon promise of raga Desh and you could feel the gentle rain washing over you.

What struck me, though, in this piece and later, was the unconventional tabla playing by Subhasish Bhattacharya. The tabalchi had magic in his fingers and kept up with the varying speeds and tempos. Thoroughly enjoyable. But I wondered, would a more traditional tabalchi have added greater enjoyment to the delineation of this raga and the jugalbandi of guitar and tabla?

Next came raga Charukeshi, this time on a huge Gibson Super 400 guitar. This was his Guru’s instrument, Debashish Bhattacharya revealed, and told us the story of how Padit Brij Bhushan Kabra forced him to play on it, even though it kept sliding off his lap because it was too big for him (it still did slide!) Charukeshi came alive under Debashish’s magical fingers and the jugalbandi with the tabla was just amazing!

Another monsoon raga was Miya ki Malhar. In India, Debashish said, it rains as if it is a joy for the sky and when the rain meets the land, it is love, pure love. On another slide guitar Gandharvi, Debashish Bhattacharya definitely expressed these emotions and more. You could feel the water-filled clouds just before the rain starts and the peacock dancing in anticipation in the first half of the raga and then, the rain coming down…Megh Malhar had it all.

The night ended with a Sufi bhakti geet, on the little ukulele kind of guitar that was called Anandi after his daughter. Just four strings, sharp and sweet, and a joy to listen to, accompanied by more of Subhasish’s unconventional tabla playing and Anandi’s vocals.

The evening was pure magic on an instrument that sounded vaguely familiar, and yet was absolutely not!

Debashish Bhattacharya certainly soothed our hearts that night. His music not only filled us with peace, but took us to sublime heights of awareness with his magnificent playing of the ragas on his unique guitars.