Dancing duo delve into a deep passion for Bharatanatyam 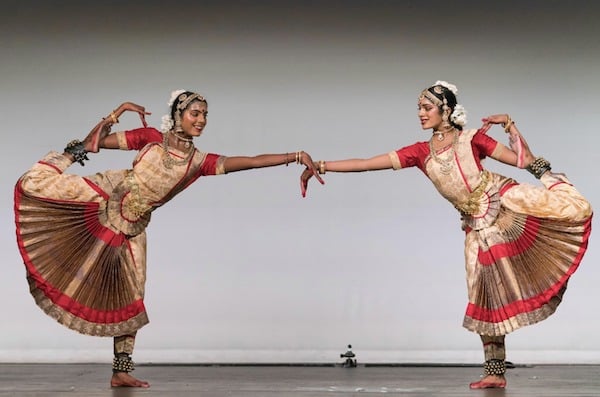 Reading Time: 4 minutesAngikam bhuvanam yasya Vachikam sarva vangmayam, Aharyam chandra taradi Tam numah satvikam sivam.
“We bow to Him the benevolent One, whose body encompasses the entire universe.” So goes the Dhyana slokam or verse that dancers hold close to their heart.

The duet arangetram by Aniita and Shreya Vytheeswaran on 10 March at The Science Theatre, Kensington, in addition to starting with this prayer, reflected this devotion towards the art form through the performance.
With resounding ankle bells, both Aniita and Shreya presented the Natesa Kauthuvam, describing the dance of Lord Siva. The close intertwining of sahitya (lyric) and sollukattu (rhythmic syllables) not only set a brisk pace for the performance but also gave it an auspicious start. The majesty of the kauthuvam was followed by the lyrical beauty of a shabdam on Lord Muruga.
Aniita and Shreya kept the audience engaged throughout, alternating their presence on stage with carefully choreographed exits and entries by guru Manjula Viswanath, a seamless flow of enchanting interpretations, tracing a story from the time Lord Muruga toddled and crawled as an infant to the time when he stood, all-pervading, as the protector of the universe. Special mention has to be made to the way in which they narrated the story of how Lord Muruga – in the guise of an old man – tricked and won the hands of the gypsy princess Valli.

Talking about the cordination and extra hours invested in achieving this in a duet arangetram, Aniita said the experience undoubtedly brought the siblings closer to each other. “Shreya and I have never really worked as a team or performed as a duet in Bharatanatyam over the years. This experience brought us closer as sisters since we had to really work together as a team. We talked about the meanings of the lyrics and what type of emotions we wanted to bring out. We also had so much to learn from each other.”
The varnam for the evening made its grand entry in raga Shanmukhapriya, on Lord Nataraja, the lord of dance. This provided the dancers with ample opportunity to explore the stories from mythology. Nandi playing the maddalam and the Lord’s dance was captured with a stately jathi (rhythmic sequence) recited by guru Manjula Viswanath, which saw the dancers showcasing their flexibility and grace. The evergreen story of the devotee longing for a glimpse of the Lord as Nandi blocked his vision was portrayed with intensity. Powerful abhinaya dominated the presentation of navarasa (nine emotions) in the next line. All the sancharis were beautifully and aptly supported by vocalist Balasubramanya Sharma, flautist Narasimha Murthy, mridangist Janakan Suthanthiraraj and special effects on rhythm pad by Jeiram Jagatheesan, highlighting every emotion expressed by the dancers. The piece de resistance finished with a plea from the nayikas (the dancers) for the grace of the lord to remove all distress.

The second half of the performance showcased solo pieces. In the javali, Aniita chose to delve into the king of all rasas, Shringaram. Portraying the character of a woman pacifying her beloved who has been lured by another woman, Aniita demonstrated with ease the varying shades of love, scorn, pining and relentless enquiry into the twists and turns of fate that grip two people in love. Shreya chose to present the beauty of goddess Devi in the kriti, Kanchadalayadakhsi that rose to a climax with the battle between the goddess and the demon Mahishasura, representing the perennial conflict between good and evil.
Dashavataram, the ten incarnations of Lord Vishnu, gave the dancers an opportunity to rise to the challenge of depicting a multitude of stories and emotions in quick succession, interspersed with brisk nritta in the swara passages. The evening concluded with a thillana in Sumanesa Ranjini followed by a natyarpanam to Sri Ramanujacharya, the guiding light of not just the dancers but also their entire family. “We were so lucky to have the endless support of our family and friends which motivated us to work harder and let us know that our limit is only something we set ourselves,” said the sisters, with gratitude to one and all.

Comperes, young Sagarika Venkat and Sindhu Ganapathy, introduced the items and the stories to be presented in detail, setting the mood for the dance to follow. “An arangetram is an opportunity to show not only other people our passion, but a time to challenge ourselves and see how much we could grow,” said Aniita and Shreya. “It was an important event that doesn’t represent the peak of our dancing but rather the beginning of many more years.” With this attitude, it is certain that Aniita and Shreya are on the path to learn and gain from the fountainhead of knowledge and spirituality that is the core of the art form of Bharatanatyam.
Photos: Dream Factory Productions