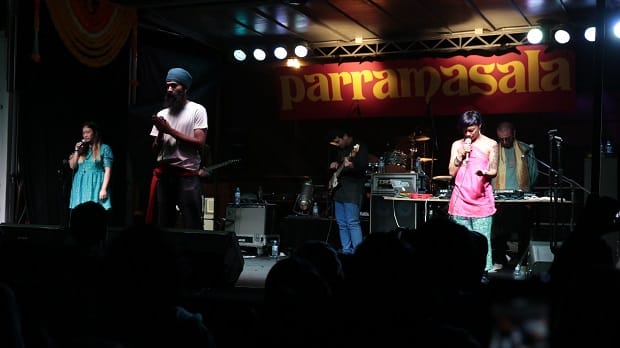 A mind blowing number of people attend the Parramasala festival every year and this year was no exception. The Prince Alfred Park in Parramatta was reverberating with diverse sights, sounds and aromas from various parts of Asia. The eclectic mix of traditional, folk and contemporary notes and sounds managed to enthral the new age spectators from all parts of the globe on this festive weekend.

The line-up this year was mostly made up of musicians originally from various parts of the Indian subcontinent, who have spent much of their lives in Australia, so creating a seamless blend of Indo-Western music is instinctive and almost natural to them.

“It’s like coming back home” said Sukhdeep Singh aka ‘L FRESH – The Lion’, about performing for the third consecutive year at Parramasala. “It’s a celebration of the Asian cultural multiplicity in all of its form, its impact, showcased to the diverse community based in Australia. As we take everyone on a journey from Western Sydney to Punjab and back, my act today has sheer components from Punjab.”

Hailing from Punjab, India, and growing up in the south west of Sydney, L-FRESH’s music manifests diverse cultural influences, and as such, was a perfect choice for the opening day of the festival. The tracks like Survive (featuring MK-1), Faithful, One, all from his newly launched album ‘One’, absolutely rocked the crowd. L-FRESH was accompanied by vocalist Mirrah’s power packed rap and hip hop dance, and they were both supported by Kimberly, Duane on the guitar, DJ MK-1, Chris Zammit and Clinton. The surprise act by the Bhangra All Stars Sydney Dance group added that explosivePunjabi tadka to the show, leaving the audience wanting for more.

On day two, the Parramasala live stage was moved toHarris Park in the evening. The set was resonating with Priyanka Pri Pri’s soulful voice as she sang AR Rehman’s version of Vande Mataram, Awari from Ek Villain and some more of her own compositions. Performing at Parramasala for the first time, Priyanka is a Mumbai chi mulgi raised in music in Australia and trained in music here. Growing up listening to the likes of Sunidhi Chauhan and Rajeshwari Sachdev, Priyanka’s show was totally about starry-eyed Hindi songs rendered with her mild Aussie twang. (The night before, she sang live to an ABC Radio audience as a guest on Dom Knight’s Evenings show, who along with Sunil Badami, presented live from Parramasala).

Next up on the DJ stage was fusion music by Sitar Funk, produced and mixed by DJ Coco Varma. Indian-Australian tabla player, Bobby Singh, a regular at Parramasala every year collaborated with Sitar Funk and the Australian ‘gyp hop’ percussionist, Ben Walsh, this year. Not unusual for a creative drummer like Ben, he played the dholak incorporating heart-pumping Indian beats to the Bhangra and pop tracks, creating an electrifying EDM outfit.

A spunk of fresh notes was infused by Bridge and Its People, a new group formed by musicians Kiran Porey and Anisha Thomas, who presented a striking synthesis of Western musical instruments with Indian classical music.

“Parramasala is a unique experience where people from varied cultures connect with their traditions in a foreign land,” said Kiran, talking about their first year at this mixed cultural festival.

“The piece was originally composed for the flute, but Bridge wanted to me to play the clarinet instead,” explained Julia, about the inventive fusion music created by the duo. The tracks rendered at Parramasala were a special pre-view of their soon-to-be released album, Beneath and Beyond.

Overall, the music at Parramasala was a good attempt to bring together an ensemble of diverse and creative talent in Australia, showcasing a montage of fusion music.