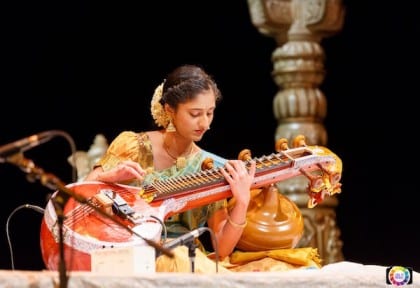 When I first heard Vishni Ravindran play in 2012, she was a soft-spoken Year 9 student whose calm and sincere countenance belied the curiosity to experiment and expand the musical idioms through the veena. That concert then, while predominantly melodic, had its share of outliers; and whenever they appeared, they were accompanied immediately by a subtle, almost imperceptible, frown on her ever-polite face.
It gave away that she was self and music-aware. The occasional disconnect between thought and execution was no doubt attributed to the enormity of the task – wielding the oldest string instrument of India with the finesse that it demanded – which she was just beginning to unravel.  Harish, her (then) kid-brother, hung around, probably coaxed by the promise of an extra dose of candy by their ever-inspiring mother Shanthinie.
Fast forward to 2017, I was flabbergasted by a confident young woman, a student of medicine, playing the very same veena, this time with admirable deftness. Harish, now a Year 11 student and built like a sportsman, accompanied his sister on the mridangam majestically and meticulously.

This time round, some 600 people had gathered to hear the siblings on the occasion of their arrangetram, held last month.  When the curtains went up, the stunning decorations, done with the eye of an aesthete, provided a beautiful but laconically contrasting backdrop to the artistes on stage.
The concert started with a varnam in raga Kaanada – not usually a “starter raga” – composed by Srinivasa Iyengar. Vishni did well to showcase the muktayi and chitta swarams, instilling an eagerness for the numbers to follow.
A languid aalap in Shanmukhapriya followed where her now warmed-up fingers extolled the raga’s gamakams in an assured and elaborate manner. “Siddhi Vinayakam Anisham”, a Dikshitar kriti was well rolled out and the kalpana swarams that followed later established her pristine understanding of the raga and its swara constructs.
While panchamam occupies a central position as it would in any melakarta raga, Vishni also flashed panchamam-free passages involving just madhyamam and dhaivatham which evoked a sense of restless eagerness in the listeners’ minds that unconsciously yearned for the embrace of panchamam to relax.
Harish accompanied brilliantly, adapting his play to sound as close to the meter of the complicated swara passages thrown at him.  All in all, Shanmukhapriya, which lasted close to 20 minutes, erased any doubts and set the bar high for the rest of the evening.

Guru Thanjavur Murugaboopathi acted as the rhythm-keeper; the young performers occasionally threw him a look during the difficult rhythmic passages.
While Thyagaraja’s Shree ragam composition “Endaro Mahanubhavulu” was presented “as is” without any extra ornamentations and was fairly satisfying, I felt the gamakas in the passage “chanduru varnuni anda chandamunu” could have been a tad better.
But for that, this song by the virtue of its chittai swaras provided the first opportunity in the concert to hear violin (Shri Mullaivasal Chandramouli) and veena in total unison – it defined bliss.
“Janani Ninuvina” in rejuvenating Reetigowlai ragam and misra-chapu taaLam paved way for the ever-enticing, vibrant “Raghuvamsa Sudha” in Kadhanakuthoohalam – a modern metric for assessing a vainika in delivering rapid chittaiswara passages.  Vishni’s occasional excursion into “two note” chords, borrowed from western music idiom and popularized by Vaidya, was a treat to hear.

While Kadhanakuthoohalam has been allowed in the modern times to “harmonise”, Bhairavi and Todi – the two veritable benchmarks to assess the erudition of a Carnatic artiste – are handled by almost every artist in the traditional monophonous manner.
Vishni’s aalaapanai, taanam, neraval and the dialogue of kalpanaswarams with the violinist for the kriti “Balagopala Palayasumam”, definitively declared her rightful belonging among the promising best in the genre.
Harish’s thani avarthanam in adi thalam (2 kalai) that followed was a beautiful display of how it can be split into an admixture of thisram, misram, and khandam sub-parts and merged back tallying the correct rhythmic count. The question-answer session between the mridangam and ghatam (Shri. Chandrasekara Sharma) drew huge applause from the crowd.

Vishni carefully explained the taalam of a tough ragam-taanam-pallavi in Karaharapriya composed by her guru Prof. Pudukkottai Krishnamurthy and went on to give a stellar rendition ably accompanied by Harish. The ragamalika taanam, neraval, sanchaaram, ragamalika kalpanaswarams and kaalapramaanam reinforced our belief in their musical acumen.
Brindavani thillana of Dr. Balamurali Krishna was clearly a dancer’s interpretation on veena and a testament to Vishni’s rigorous training in Bharatanatyam. The energy and vivaciousness was unmistakable and when it ended, it brought a smile on everybody’s lips.
Shri. Murugaboopathi and Dr. Ramachandra heaped deserving praises on the duo and attributed their stupendous performance to “never missing homework”.
In a nutshell, simply outstanding: the Ravindrans are bound to make a huge ripple in the field of Carnatic music.