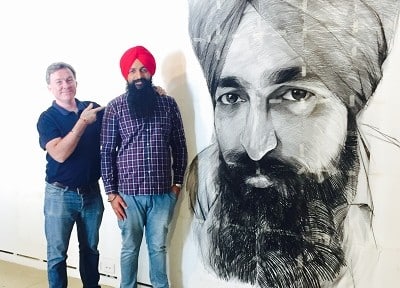 A chance encounter, perhaps a rapport, mutual respect, and a whole new vista was opened up for Daniel Connell in his career as an artist.
While riding in a taxi in Adelaide, Daniel saw something special in his Sikh driver Lakhvir Singh and asked if he could paint his portrait.

That first portrait became the first of many, and today, Daniel has cemented a reputation for his for his formidable portraiture of Sikh figures. He presents his work again at this year’s Adelaide Fringe 2017.
With degrees in Spanish and Latin American Studies, a Grad. Dip. in Education, Masters in Visual Arts, working toward his PhD, and learning Hindi as well, Daniel is certainly no slouch academically. Nine years working as a school teacher teaching Spanish got him involved in social and community organisations.
But with his love of painting, he has been a freelance artist since 2007. And now, recognised worldwide, he has presented in Glasgow, Sheffield, Frankfurt, London and the US and his works were shown in the prestigious Kochi-Muziris Biennale in India.
While Daniel has been painting for as long as he can remember, his interest in India was aroused while barely a teenager which led to his interest in the writings of Gandhi and Tagore. On his first visit to India in 2008, he recalls feeling “utterly at home, in a crazy sort of way”.


He lived in Rajasthan for three years and while there painted a portrait of Greg Chappell, who was coach of the Rajasthan Royals at that time. This painting was selected for the prestigious Doug Moran Portrait Prize.
Working with transport workers in Australia, and from the Sikhs in the north to the labourers in the south in India, Daniel’s paintings try to capture the dignity of workers who toil with the sweat of their brow. Being “a deeply religious and spiritual man” his work seems to honour the essential teaching of Guru Nanak -that work is central to an expression of faith.
He sees in the taxi drivers hard-working young men, proud of who they are and in their beliefs, proud to wear a turban and put themselves out there to be judged. It is this sense of bravery that drives Daniel to continue with his portraits which he sees as a message, standing up for the immigrants. He uses A4 sheets of paper stuck together with tape to make a large canvas for his works. This is deliberate as it can be seen as a metaphor of the fragility of new immigrants in a new land.

Daniel Connell said at the start of our meeting that “the exhibition is dedicated to Manmeet Alisher, the bus driver brutally murdered recently in Brisbane”.
On display are huge charcoal portraits, some oils and other smaller portraits. A novel part is Daniel actually painting on the spot. The work being painted during my visit was of Gurinderjit Singh, a fairly recent migrant who is also a taxi driver.
Gurinderjit was full of praise for Daniel saying, “He is a very good person… motivated to understand my religion. We are trying to help the homeless people in the city and are working on that.”
In February this year, Rajpal Singh Sidhu, another taxi driver, was robbed at knife-point at the end of long shift outside his home. He too will be one of the subjects to have his portrait painted during the course of the exhibition which runs until 2 April.

When asked about the future Daniel said that he expects to continue to make “…bigger pictures and portraits”.
“Art is an investigation that never stops,” he says. “India taught me that.”
Over the last two years, his work has moved from just making pictures to actual representation to authorities and advocacy on behalf of new migrants covering a wide spectrum of their needs. It’s no wonder that he has endeared himself to the Sikh community. They are indeed fortunate to have someone so engaging and gifted sympathetic to their cause.
- Advertisement -
Share
WhatsApp
Facebook
Twitter
Linkedin
Previous articleOnce stung, twice as deadly
Next articleYou hurt my feelings, now make me a millionaire