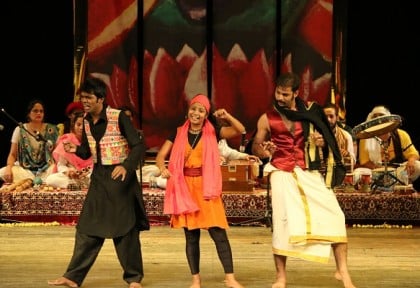 With a host of events celebrating the ongoing Confluence Festival of India in Australia, the recent talk of the town has been the award-winning Piya Behrupiya. A two-hour theatrical presentation with a uniquely Indian sensibility, the play rams down all sorts of walls with a heavy dollop of laugh-out-loud humour.

Recently performed at the Sydney Opera House, Piya Behrupiya had an almost sold-out audience of those eager to witness a Hindi musical adaptation of Twelfth Night, one of William Shakespeare’s best known romantic comedies. Presented by The Company Theatre (TCT), a non-profit theatre ensemble from India, ever since it premiered at Shakespeare’s Globe in London, England, Piya Behrupiya, literally meaning ‘lover impressionist’, has reaped success across the world.
Known for its tongue-in-cheek humour, the play is a full-throttle rendition of the Bard’s original work – capable of eliciting either disgust or delight. Filled with a cast of unforgettable characters, the play combines cruelty with high comedy and the pangs of unrequited love with some of the subtlest poetry and most exquisite songs Shakespeare ever wrote.
TCT’s mob of actors transforms the play into a Nautanki (a folk performance tradition from North India) outfit – creating onstage bedlam. The production takes on a distinctly Indian idiom with a variety of Hindi dialects. Amitosh Nagpal, who translated the work, has retained the original character names, while director Atul Kumar has infused Indian folk songs with dance and dialogue in a unique way.

Characters engage in contemporary banter and sardonic humour, referencing problems plaguing a developing India. The clever translation, infused with an array of beautiful melodies from Punjab, Madhya Pradesh and Rajasthan, including some original compositions, complement the storyline.
The plot unfolds in the household of Olivia, where two campaigns are being quietly waged – one by the lovesick Duke Orsino to win the heart of the indifferent Olivia; the other by an alliance of servants and hangers-on against the high-handedness of her steward, the pompous Malvolio. When Orsino engages Viola, cross-dressed as Cesario, to plead with Olivia on his behalf, a bittersweet chain of events unfolds.
The foolery seems to work well and is the entertaining part; however the occasional sexual innuendos, and over-the-top moments may lose the audience for a split second.
Yet The Company Theatre’s production of Shakespeare’s play is an enjoyable experience.
The critically acclaimed stage show has bagged the META awards for Best Ensemble, Best Production, Best Supporting Actor (Male) and Best Supporting Actor (Female). It also won a Special Jury award for script adaptation and was widely appreciated by artists such as Konkana Sen Sharma and Vinay Pathak.