Selfie Queen of the literary type 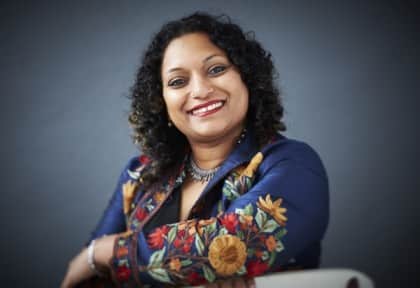 For someone who claims she has never taken a selfie in her life, Roanna Gonsalves has been talking an awful lot about them lately.
“The selfie is a wonderful tool of empowerment,” she says – almost reverentially – especially as an instrument in the hands of people who are just beginning to gain some control over their own narratives.

“I completely understand people who are selfie-obsessed. They haven’t had access to mechanisms of self-expression before…!”

So let’s give them a break, allow them to get their hands dirty with it, and see what they come up with.
Roanna’s particular type of selfie though, and one that is her latest claim to fame, is the literary type. The ‘literary selfie’ as a concept has become closely associated with her work ever since her first book The Permanent Resident came out last year.

It is a collection of short stories from the Indian Australian community, describing the experiences of old settlers, new arrivals, impoverished students, young couples out of their social support systems, domestic violence perpetrators and victims, and much more. It provides a snapshot of the Indian migrant life in Australia, a ‘selfie’ of our community, albeit through fiction.
Such literary selfies “help to turn the gaze back at our own selves” as a way of challenging the “blinkered view of reality” in contemporary Australian literature where we don’t see stories of people like us.
They also invite engagement just like a real selfie that is liked, commented upon, shared, and retweeted.
Roanna says, “It’s like saying, this is me, showing you me. See me showing you me!”
It’s gone on to become a passion, self-representation in literature and the arts.
“It’s time to take control of our own story, whether as women, or migrants, or the disabled, or the transgender. Not that you can’t tell others’ stories, I’m fine with that, but we need to create pathways for them to tell their own stories. It’s time to champion the stories that people tell of themselves.”
*
The Permanent Resident has met with overwhelming success, bringing Roanna permanent residency in the contemporary literature scene.
“I didn’t expect the response I got,” Roanna admits. “Of course every writer likes to dream that their work will change the world, but this particular book was very very niche – it’s written by an Indian woman, about a very niche culture, that of the Mumbai-Goan Catholic community. But I’m humbled by the response, because the issues discussed really transcend cultural background.”
The stories offer a medium for the writer to comment not only on the migration experience, but also on race relations, hierarchies in society, gender politics, abuse of power and other issues that are not necessarily restricted to the migration experience.
“Writing it was pure joy,” says Roanna. “I wanted to bring to attention the experience of Indians as the coalface of the city, driving the cabs and working the graveyard shifts at petrol stations, the ‘modern outsiders’, people we don’t see often enough in Australian literature. International students, for instance. I have tried to draw attention to the work and the labour that first generation migrants provide that the country relies on but does not acknowledge. International students fund our universities, you know!”

“It was a fabulous festival – very inclusive and culturally diverse in terms of both presenters and audience,” she recounts. “My author talk went off well I thought, with many requests for the transcript. At the panel discussions as well, the audience were generous and interesting and highly attuned, which was nice.”

On one of the panels, Writing Race, Roanna spoke with other people of colour including Booker Prize-winning American writer Paul Beatty, before that other event with interviewer Michael Cathcart. (In an interview much talked about for its awkward exchanges, Cathcart asked Beatty if he has ‘learned’ to be black).
Roanna laughs, “Well, our discussion was about race as an assumed thing, not a reinvention! Paul was a bit reserved, yes, but he warmed up.”
But it was the day-long writing workshop, a sell-out that Roanna is most happy about. It is the workshops that Roanna loves most in her working life as well. She currently teaches Creative Writing and Media Studies at UNSW and Postcolonial Literatures at Western Sydney University.
*
Roanna’s skilful and playful way with words has come in for much praise from reviewers of the book.
“I’m a writer more than anything else,” she laughs. “Yes I do love to play with words and do interesting things with them… like a bit of a play in the sandbox – but with purpose. But I write because it gives me much joy. I can do it better than anything else, and I want to contribute to the literary culture here and change the way we imagine Australia.”
Why, according to her is fiction important?
“It allows us, more than any other method, to get into the heads of people different from us – and hear their story. It’s an invitation to empathy.”
Talking of empathy, a solidarity of sorts can be seen in Roanna’s works, with Australia’s Indigenous people (‘a-BOR-iginal’, as many of her characters call them in her stories).
“Thanks for picking that up,” she says. “I had no clue when I came here about Indigenous history. The more I read, the more shocked I become. It was Paul Keating that said, ‘If you own a piece of land, you can bet it was Aboriginal land’. This may be a first world country, but it became first world through genocide and dispossession. I’m very very conscious that we are here as beneficiaries of the traumas Indigenous people have faced. Yet they are warm and welcoming, never telling us to go back where we came from. I’d like to make amends in some way.”
Roanna is one of a growing number of people in the Indian-Australian community who have begun to show such appreciation. With our own history as formerly colonised people, we have certain things in common with the First Australians. The story-telling tradition itself is one such. Could this, combined with our propensity for languages – given that we are commonly bilingual, if not multilingual – account for the great rise in modern times of South-Asian writers at the world stage?
“You could be right there,” noted Roanna. “Language swirls around us, and that helps. It also helps us to see the world in different ways. We’ve taken the language of our colonisers and made it our own – like an elastic band stretched in beautiful new ways.”
She might as well be referring to her own work with that statement.