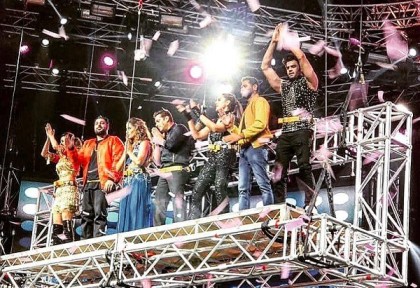 Reading Time: 4 minutesHe’s Bollywood’s ultimate ‘Bhai’ (brother), even though admittedly he hates being referred to as such.
But it was more than brotherly love for 20,000 avid fans at Sydney’s Qudos Bank Arena recently, as Salman Khan aka Sallu Bhai delivered an entertaining show.


The film actor and producer had the entire auditorium dancing to old and new Bollywood hits as he brought the house down repeatedly with his signature moves.
With the help of his handpicked heroes and heroines, Khan’s Da-Bangg The Tour 2017 in Sydney on April 22 was definitely a night to remember.

Khan sure knows how to make an entrance! The audience erupted in cheer as the star of the evening arrived – entering from the ceiling atop a smaller stage.
Khan performed with his three co-stars Daisy Shah, Bipasha Basu and Sonakshi Sinha. Of course, just as expected, the loudest cheers were reserved for the duet with Sonakshi, ‘Tere Mast Mast Do Nain’ from Dabangg. All that was missing was that trademark moustache! You couldn’t help but feel nostalgic.

Salman’s characteristic style was also beautifully shown off in ‘Jag Ghoomeya’ from Sultan as he repeatedly performed the complex routine.
For three hand-picked female fans, it was as if all their dreams had come true as Salman invited them up on stage to dance with him.

Two other fans who submitted a minute-long video describing their love for the Sultan of Bollywood, were lucky enough to be invited on stage to meet the superstar for a brief chat. He even serenaded one of the lucky ladies, perhaps even surpassing her expectations of seeing him up close and so personal.

Prabhu Deva proved to be the King of Dance as he initially engaged the crowd without the need for chorus line dancers. The rhythm flowing through his body was evident in his zealous dance moves, the audience cheering him on in full support.
Earlier on, the evening had begun with an electric performance by Shiamak Sydney, a Bollywood dance team in Australia. Their choreography, energy and costumes were nothing short of the types of performances presented at Indian awards shows.
Now to be frank, I hadn’t heard of Manish Paul before but after witnessing his humorous hosting, he will be hard to forget. The witty comedian did a great job introducing every act, constantly making jokes to entertain the audience. Paul even made listening to the sponsors being read out enjoyable, which as we all know is a key element to Indian events. (Which is just as well, given that Sallu Bhai was not exactly chatty throughout the show, much to the disappointment of some fans).

Indian rapper Badshah sang party anthems alongside Aastha Gill and Gurinder Rai, because after all, abhi toh party shuru hui hai. Much like Prabhu Deva, the trio matched the energy in the arena without the need for back-up dancers. They even treated the Sydney audience to a never-heard-before song.
The finale was the most striking aspect of the concert. Performing for nearly 20 minutes, members of the Da-Bangg Tour danced to a medley of hit songs, including ‘No Entry’, ‘High heels de nache’ and ‘Selfie le le re’. The seven stars reached new heights (literally) as they were elevated in the air, basking in their high spirits. There was a positive ambience as many audience members got up from their chairs and danced along to the Bollywood beats.
Does anyone else feel like watching Dabangg 1 & 2 now?
- Advertisement -
Share
WhatsApp
Facebook
Twitter
Linkedin
Previous articleAnzac Sikhs grow in numbers
Next articleIndian contingent marches with pride