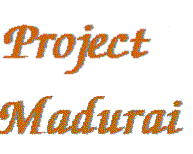 In one of many truly positive stories of the Information Age, ancient Tamil literary classics are being brought back to life for a whole new generation of readers

A group of Tamil-lovers around the world are giving freely of their time and expertise so that electronic versions of printed texts are made easily available through the means of internet.

They call this labour of love, Project Madurai.

Dr Kalyanasundaram, the Project Leader of ‘Project Madurai’ was in Melbourne recently, and gave an inspirational talk at the Carrum Downs Secondary College under the aegis of the Australian Tamil Academy.

Since its launch in 1998, Project Madurai e-texts have been released in Tamil script form as per TSCII [Tamil Script Code for Information Interchange] encoding. Since 2001 they have begun releasing e-texts in Tamil Unicode as well. What it entails is the typing up or scanning of old books and archiving the text in one of the most readily accessible formats [etexts] for use on all popular computer platforms. The e-texts are available in both web/html and PDF formats. Distributed through the world wide web services, anyone, anywhere, may download a copy for personal use or read what they publish on the internet, free of charge.

Dr Kalyanasundaram spoke about his almost serendipitous involvement with the project – because he was neither a Tamil scholar nor an academic. Although hailing from Tamil Nadu, he was a Chemistry researcher, and his study and research had taken him far and wide. He is now located in Lausanne, Switzerland, from where he coordinates this effort with the help of the internet!

“I was drawn towards this enterprise, together with like-minded Tamil enthusiasts, with the view to preserving the precious collection of Tamil literature – both old and new, from all over the world, for posterity,” he said.

Tamil cognoscenti will be aware that were it not for the enormous efforts of U V Swaminathan Iyer in the early 20th century, many of the invaluable works of Tamil literature going back 2000 years would have been lost and not available to us in print form.

Why was Madurai chosen as the name of the project?

“It is one of the oldest cities in Southern India and a centre of learning, pilgrimage and culture for centuries,” Dr Kalyanasundaram pointed out. “The city’s history can be traced to the Pandyan kingdoms going back 2000 years. It was the Pandyan kings who set up the ‘Sangams’ or academies for the promotion of Tamil literature: great such as Ettuthohai, Pattupattu etc were compiled by the giants of Tamil literature such as Tiruvalluvar, Avvaiyar, Nakkirar, Ilango Adigal – to name a few.”

Dr Kalyan spoke about the technical problems they faced initially when they were trying to create a font in Tamil that would work across all platforms. It later came to be known as Mylai. In the late 1980s, the Tamil newspaper Dinamalar became the first to print in Tamil using computers. Somewhere down the line, the Tamil Nadu government recognised the value of the Project and helped place more than 80 authors in the public domain. Dr Kalyan spoke about the painstaking effort with which they traced extant copies of ancient works, often purchasing them with his own money; or photocopy sole copies of works. He recounted how his work took him to Oxford Library, where the only printed copy of the important Shaiva text the Shiva Puranam (1902) was found, having been placed there by the inimitable missionary-cum-Tamil scholar Pope! Dr Kalyan photocopied the entire text and then made an e-copy available on the website.

Project Madurai was set up and runs entirely with the effort of volunteers: anyone can join and contribute in any way they can. It is a grass-roots internet based effort, and the texts they make available electronically belong to everyone. Check out details at www.projectmadurai.org