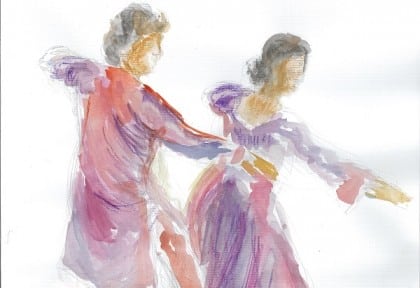 It’s a wonderful modern interpretation of kathak, but APARNA ANANTHUNI worries about a striking element of dissonance

When I first saw Nirupama and Rajendra, internationally acclaimed kathak duo from Bangalore, in Melbourne, back in 2011, I knew nothing about kathak. With my aesthetic sensibility steeped in bharatanatyam, the result of Melbourne’s being absolutely flooded with this South Indian dance form, I found it strangely exuberant, vivid and free, something I had never associated with Indian (neo)classical dance. And indeed, what I’ve since come to love about kathak is its spontaneity, its sensuality, its ease with the ground, with the air, and the way its gestures – so ‘un-mudra-ad’, so unlike South Indian dance forms – can speak to the contemporary desire for freedom of body and movement.

Last week I watched the duo again, along with their senior student and a lead dancer of their dance company, Rohini Prabhat, in their latest Melbourne performance, ‘Rang’. That was when I realised that what Nirupama and Rajendra do with kathak is actually incredibly unique. Their work skillfully leverages the form’s inherent flair and drama into a set of theatrical, costumed stage performances that use both traditional and contemporary Indian music, as well as world music, while still dancing the kathak repertoire.  The result is remarkably harmonious and balanced in a way that many so-called ‘fusion’ (I hate that word!) performances are not.

‘Rang’ consisted of a series of themed pieces. Nirupama herself announced and explained each item beforehand – a nice intimate touch, which is a characteristic of Nirupama-Rajendra’s interaction with their audience. Further charm was added by the duo’s playfulness on stage. For example, in the their introductory piece, while dancing signature kathak high-speed ‘chakkars’ or spins, one of Nirupama’s earrings fell, which she deftly (while still dancing) threw to the side of the stage.  And in the very next piece, ‘Varsha’, about the monsoon, Rajendra, acting the part of the romantic hero or ‘nayaka’– romantic love being a typical motif of monsoon music – sneaked cheekily up to her and held out the dropped earring, which she attempted, unsuccessfully and laughingly, to fix back in while still dancing. I would have, truth be told, found ‘Varsha’ a little too cutesy for my liking if it hadn’t been for this fun little bit of improvisation.

Nirupama at one point spoke of the journey of being a dancer, declaring, “Our gurus in their eighties are still excited. And that is what dance gives to the dancer, a tremendous sense of hope and joy in life.” And this wasn’t just rhetoric: the duo’s genuine joy in movement – and in dancing together – came through in every piece they performed.
In ‘Tarang’, an exquisite piece consisting of pure dance (rather than storytelling), they performed an exchange of footwork that had teasing, knowing humour woven through it, and also included a beautiful presentation of gat (gait), one of the unique elements of kathak. However, the highlight of the performance, for me, was ‘Tha-Dah’, a piece danced against a blend of North Indian classical music interwoven with Afro-Jambe and jazz. As Nirupama described it, this piece was about “Two energies coming together…[and] how when two things come together a beautiful synergy happens… [and] how with kathak we can be very universal.”  Indeed, ‘Tha-Dah’ was dramatic, sensual, sharp, soft, romantic, and of course playful by turns, harnessing the full range of contemporary movement possibilities that the kathak aesthetic offers. Nirupama’s shimmering purple gown lent an almost baroque glamour to this piece.

However, what was problematic about ‘Rang’, were the two sexist Ramayana pieces that were performed: ‘Vimana Yana’, a section from Kalidasa’s Raghuvamsa, and ‘Panchavati’, an enactment of the ‘golden deer’ episode of the Ramayana, danced solo by the highly skilled Rohini Prabhat. It’s true that Nirupama explained their inclusion of Ramayana in relatively secular terms:  “…They stand for human values. They may be represented as our gods, but they were all human beings with divine qualities….”  But it’s not enough to secularise – despite Nirupama’s declaration that in classical dance “what is done is not that important, how it is done becomes important”, the misogyny of these danced stories urgently needs to be addressed too. Because we watched the ‘same old’ ‘same old’ of lordly, wise, ‘manly’ Rama, teaching or preaching to or objectifying childish, foolish, helpless Sita, with no attempt to make this story ‘universal’ and contemporary at all. In fact, Nirupama spoke of Sita as “fragile”, and described the Panchavati episode as illustrating, among other things, “how a woman feels, alone, when the husband is gone.” It’s true that the musical backdrop for ‘Panchavati’ was unusual – swelling, orchestral, almost Disney-like, the product of a collaboration between Ravi Shankar and Philip Glass. But the stern patriarchal story of chastising and teaching the ‘foolish woman’ that was danced against it created a real dissonance – especially since other work presented by the duo, such as ‘Tha-Dah’, was so unbound.

Towards the end, Nirupama and Rajendra presented a delightful version of ‘jugalbandhi’ (improvised exchange), with no music or percussion accompaniment, just their ankle bells and each other, with the audience invited to participate with clapping. Undeniably, theirs is a technical skill, unpretentious exuberance and physical chemistry that is hard not to be swept up by.
The aesthetics of kathak – informed by its almost wholly secular, courtly history – are, as I said in the beginning, particularly suited to expressing modernity and its desires. So I am now left asking:  how meaningful can attention  to costume, lighting, music and audience engagement be, where there isn’t also a drive to re-vision and re-write the archaic and patriarchal as the contemporary and equal, and to tell stories of depth and substance that seek to connect and explore, as well as entertain and amuse?
Images courtesy of Natya Bollywood