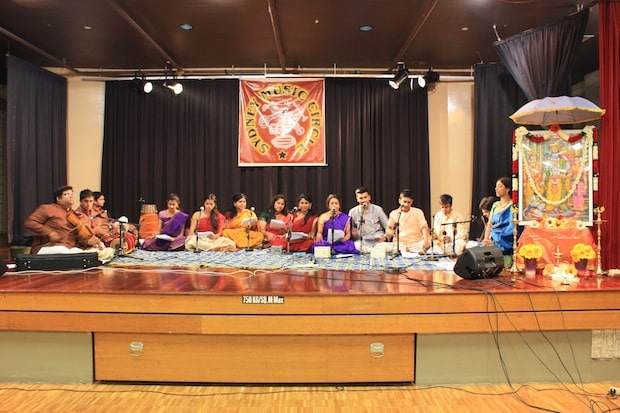 As I listened to Nirupama Raman singing Chesinidella Marechidivo in raga Thodi, I couldn’t help thinking, “What a fantastic Rama Navami indeed”. Such neat diction. Such a well-knit Neruval and Swara Prasthara. Very reminiscent of the great MLV, she gave us a typical concert feel of Chennai, or perhaps Bangalore, where Rama Navami is particularly significant; plenty of Carnatik music concerts are organised around this time.

Nirupama was performing at the monthly concert organised by the Sydney Music Circle (SMC).

The afternoon at the Dundas Community Hall started with Ankitha Ananda who, gifted with a sweet voice, presented an impressive varna in Kambodhi, Gananathena in Arabhi, Vande Vasudevam in Shree, an elaborate Shankara Bharana (a Devi krithi by Swathi Thirunal), Ramanamame in Desh and a thillana in a rare raga Shudda Salavi. Dilip Ramaswamy accompanied Ankitha on Violin.

Nirupama started with varna in Kethara Gaula and continued with Chesinidella, Anupama Gunambudhi in Atana, Kapali in Mohana and a Thillana in Sindhu Bhairavi. A first time performer at the Sydney Music Circle, she established that she has good control over the artform, showing confidence and skill. Kapali was indeed a treat to the audience. Sanjay Ramawamy gave a very pleasing violin accompaniment and was in command of his craft throughout.

The third item Sri Rama Jayam was next to follow and was conceptualised and presented by Hamsa Venkat, the well-known Bharatha Natyam exponent in Sydney. It was a magnificent musical garland of compositions on Rama by sages Valmiki, Thulasidas, Mira Bai and composers such as Thyagaraja, Muthu Swamy Dikshita, Arunachala Kavi, Annamacharya, Purandara Dasa, Kalidasa, swathi Thirunal and others. Included were as many as seventeen composers. These were presented in attractive ragas such as Natta, Hindola, Yadhukula kambodhi, Ananda Bhairavi and others.  It was a feast of all time compositions such as Yaro Ivararo, Mamava Pattabhi Rama, Yetiruhananau, Jagadanandakaraka, Pavanaja stuthi patra and others. 14 vocalists and instrumentalists delivered the items. These included Abhinav Rajkumar, Devika Krishna Murthy, Lakshmi iyer, Namrata Pulapaka, Siddhath Murali, Sindhu Sharma, Srit Balaji, Sudarsha Ravi, Vasudha Narayan, Kranthi Kiran Mudigonda, Nagaraj iyer, Nirmal Ayyar and  Ramesh Haricharan. Many of the items came out with packed feelings. It was a delight to watch the youngsters, most of who are born and brought up in Australia, perform in such a pleasing manner. Mahan Ayyar provided the powerpoint presentation that went with the item.

It was particularly impressive to note that young Nirmal Ayyar provided mridanga support for all the three items of the afternoon. Kudos to the SMC for arranging such an event.