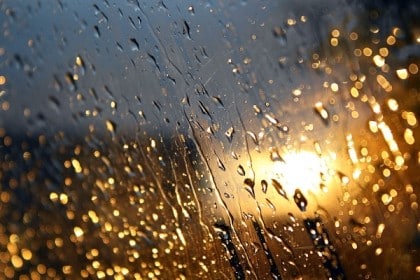 The old woman lay on the bed staring out of the window. She did not see that it was raining heavily. Her thoughts were on her son. She knew that she did not have much time left. But she was not ready to go without seeing her son who was her joy and pride. Her little boy. Not that he was a little boy anymore! He was a grown man working in the city. She knew he would come. There was a flash of lighting followed by thunder, as the rain came down in heavy torrents. She sighed and closed her eyes. The pain was unbearable. Part of her longed for relief, while part wanted to live.
Her husband walked out to the porch. He too knew that the end was near. He knew she was in a lot of pain, but not once did she complain. She had been a strong, active person before this terrible illness struck her down. How was he going to live without her, he wondered unhappily. Thirty-two wonderful years together. A wife, lover, friend and companion, is what she had been to him. Tolerating his temper, encouraging his business ideas and cheering his successes. He knew that with age he had mellowed, and could see things much more clearly.
He walked back into the house hoping that the rain was not going to prevent his son from coming to see them. He noticed that the floor in the living room was wet. He realised that the rain was beating in through the glass of a broken window higher up in the wall. He decided to wait until the rain stopped, and then do something to fix it, if only temporarily. The rain finally stopped, and he walked to the shed in his backyard. He picked up a large piece of plastic sheeting and the ladder and walked out towards the window. He leaned the ladder against the window frame and climbed up carefully, with the plastic sheet in his hand. He managed to push one corner of the sheet between one end of the other window and the frame, and turned to try to do the same thing with the other end. But he lost his balance and fell hard to the ground. He lay there, as the rain began again, beating down on his face.
Inside, the old woman saw a bright white light shining, and saw a youthful husband beckoning. With a radiant smile she rushed into his arms.
The son ran in from the rain, surprised that his father was not there to greet him. “Mum, Dad, I am home,” he called. But only silence answered him. Outside the rain continued to pour down like teardrops from heaven.