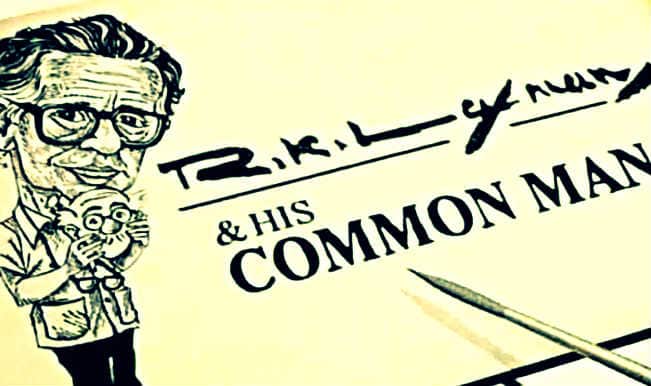 A story in the media goes that one day a few decades ago, The Times Of India (ToI) cartoonist and creator of The Common Man, R.K. Laxman, retired. The following day, the legend’s cartoon was not to be found as readers rubbed their disbelieving eyes over their morning cuppa.
Sustained letters and calls to the ToI offices from the loyal and casual readers finally led to Laxman being dragged out of retirement and reinstating the uncommon, signature cartoons to their dedicated slot on Page 1.
That was the command Laxman’s Common Man in “You Said It” pocket cartoons held over masses, having regaled several generations of ToI readers in Mumbai and elsewhere in the country, for decades.
ToI management rewarded Laxman with lifetime employment, while his son Srinivas Laxman, considered India’s only journalist specializing in space reporting, retired in 2009.
“He continued as a regular fulltime employee and drew his salary till the end…” Laxman’s wife Kamala told IANS.

After a rich life, the creator of the man with a bushy moustache, tufts of hair on the rim of a balding head and perenially donning a chequered coat with patch-work – The Common Man, immortalised as a statue in front of an educational institute in Pune, died on 26 January at the age of 94.
Born Oct 24, 1921, in Mysore, Rasipuram Krishnaswamy Iyer Laxman and his brother R.K. Narayan, who later became a leading Indian English writer – besides four other brothers – had an ordinary childhood, as evidenced from Narayan’s books, The Malgudi Days.
Laxman loved drawing, painting, and even writing a bit, grabbed all opportunities to practice his talents – be they books, tables, floors or walls.
At an early age, he lost his father, a school headmaster, his elder brothers took up the responsibility for managing the house while Laxman completed schooling.
He applied to Mumbai’s famed Sir J.J. School of Arts, but was rejected – his drawings failed the high expectations of the renowned institution.
Disappointed but not disheartened, Laxman joined Maharaja College, Mysore, and earned his B.A. degree from the University of Mysore, and came to Mumbai for a living.
Alongside academics, he pursued drawing, first with freelance contributions to local publications, Swarajya, Swatantra, and later sketched cartoons for brother R.K. Narayan’s stories published in The Hindu and other newspapers.
His earliest works with Mumbai media were a stint with the defunct Blitz, and then to the leading newspaper of that era, The Free Press Journal, as a staff cartoonist.

At that time, Laxman’s colleague was one soft-spoken gent, Bal Thackeray – who later became a commanding political force in Maharashtra – and they remained dear friends till Thackeray’s death Nov 17, 2012.
Laxman later got an offer with the ToI – which proved to be the turning point in his career and made him a living legend.
As the ToI’s cartoonist, Laxman had a field day – always taking a bit cynical, humorous, and hapless, view of the country rising from the ruins of the so-called jewel in the crown of the British Empire into a force to reckon with in the global arena – through the eyes of The Common Man, his vocational trademark.
Laxman had an uncanny knack of caricaturing all humans – politicians, film stars, celebs or criminals – highlighting some or the other of their features and characteristics, which bestowed upon them an instant identity.
The antics of all his powerful subjects – who became equal under Laxman’s brutal pen and brush – were reduced to ordinary jokes or public buffoonery.
It was the bald head of the late prime minister Jawaharlal Nehru, who was rarely seen without the Gandhi cap, while it was the long pointed nose and narrow eyes for his daughter, Indira Gandhi.
Rajiv Gandhi was depicted as a confused, cherubic baby-faced youth, while younger brother Sanjay Gandhi was the naughty, enfant terrible of Indian politics, and Morarji Desai was one tall thin, grim man, standing ramrod, both in Laxman’s creations and in real life.
Who can forget the short and roly-poly perpetually grinning image of former deputy prime minister Jagjivan Ram or the potbellied S.B. Chavan with a stern, headmaster expression always on.


Once Laxman said at an informal gathering that politicians of every genre used to approach him and begged of him to make their caricatures, that would make them famous and ‘noticeable’.
But, he would politely shoo them off, saying ‘when your time comes, I will make you a cartoon…’ – and mercilessly chronicled all the good, sad, grim and ugly historic events during his more than six decades of caricaturing.
His severe criticism of successive governments at the states and the centre, always highlighting their glaring acts of omission and commission in his typical wry humour, earned him fans and admirers even among his worst detractors.
Later, his works were compiled into a whopping nine volumes of pocket cartoons and a book of select political cartoons, The Eloquent Brush featuring his best commentaries from the Nehru to Rajiv Gandhi eras.
Laxman was invited by various organisations and governments to travel around and write and illustrate his memoirs – in the form of short stories or travelogues – as he did for Madhya Pradesh, West Bengal and also Australia.
However, the government mandarins and politicians whom he slaughtered with his pen and brush, proved a forgiving lot when they honoured him with top civilian awards like Padma Shri and Padma Bhushan, and on the international stage, he bagged the Magsaysay Award.

Laxman also wrote a few novels, many short stories and directed a movie Wagle Ki Duniya for the national television, his autobiography The Tunnel Of Time and later, a tele-serial based on his works was also launched.
Doted by his writer wife Kamala, son Srinivas, and daughter-in-law Usha, Laxman preferred to discard his home in the posh Malabar Hill, south Mumbai, to live in the quiet environs of Pune, just a couple of hours’ drive away.
- Advertisement -
Share
WhatsApp
Facebook
Twitter
Linkedin
Previous articleObama, Modi bring mutual chemistry, action to business ties
Next articleWoman leads guard of honour for the first time