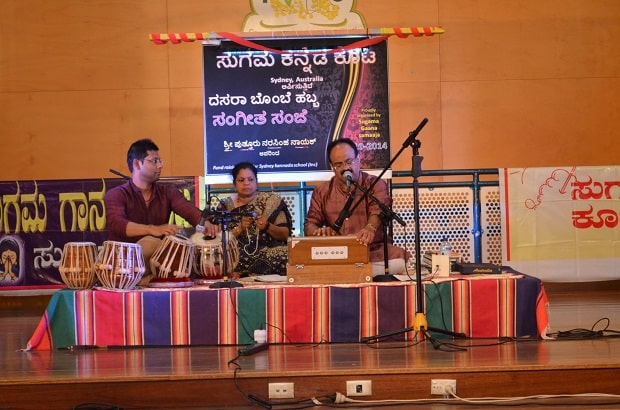 Karnataka has made many unique contributions in the field of music. One, devotional Devaranamas composed by many Dasas including Purandara and Kanaka Dasas. Two, rendering to music the lyrics or Bhavageethe composed by poets of this and the past century. Today, these two items dominate the semi classical music scene in Karnataka. People flock to hear their favourite singers. Of them Puthur Narasimha Nayak is the foremost.

A very popular singer, Nayak has rendered more than ten thousand compositions of Haridasas, Bhavageethe and film music in more than 5000 concerts all over the world. He has more than 25 awards to his name.  Sydneysiders had an opportunity to listen to him live on Sunday 26 October, at the Wattlegrove School. The concert was organised by Sugama Kannada Koota which has been rendering yeomen service to the cause of Karnataka and Kannada in Sydney by running schools to teach Kannada, by bringing out an e-zine and promoting music.

Puthur Narasimha Nayak’s item Nanena Madideno by Purandara Dasa came out as a dramatisation of the feelings packed therein. The protagonist feels that God is kind to everyone other than him. He as Krishna is supremely happy when the poor Sudhama offers him a handful of pressed rice and gives him all the wealth and prosperity. Similar are the stories with Ajamila and a host of others. What has the protagonist done to suffer this treatment? The meaning and the feeling were brought out very vividly. With Nayak’s prose interludes in the middle, it had the effect of Harikatha. The same experience was carried through in the items – Ullavaru shivalayava, kannolage kanniddu and Ninna nenedu manavu nillade.

Nayak also rendered two of his hit items – Pavamana and Dasanagu, to the thrill of the audience.  The reviewer is aware that these items are popular throughout Karnataka. Did Nayak give himself to excessive vehemence? Somehow the words and the meaning were submerged in the noise, excessive speed and acrobatics.

Brindavane Venu, an Abhang in Marathi, was a treat. Some freshness was infused into the celebrated item Bhagyada lakshmi baramma. Starting in typical Bhimsen Joshi style, Nayak turned it into a musical extravaganza. Lines were presented in different ragas and also different styles. He also reminisced about the way it was sung 60 years ago. As can be expected, meaning and feeling were sacrificed in favour of music which itself was enjoyable.

The concert also included non-devotional items or Bhavageethe.  Sneha atimadhura and Ninolume indale were treats. Bare Rajakumari with its light hearted humour captivated the audience. It should be said that Shravana Banthu saw all meaning flushed out in favour of the dance rhythm, typical of that in Hindi movies.

The concert brought to light one of the gems of Sydney – Abhijit Dan, who presented the tabla accompaniment. He proved that music is beyond words and language. His anticipation in playing seemed extraordinary. Poornima Kuduva played on the jingles.

Well, this reviewer has his point of view. Keeping that aside, it clearly seemed that this is the type of music that today’s audience desires. From that angle, the concert was a huge success.