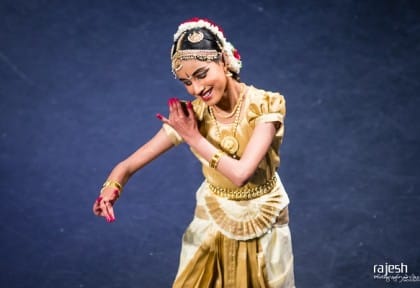 She may only be 10 years old, but there was much expectation from those gathered at Pymble Ladies College for Vishakha Iyer’s arangetram. Demonstrating poise, promise and prowess, the student of Samarpana School of Indian Fine Arts certainly delivered a flawless performance.

After all, Vishakha continues the distinguished Bharatanatyam lineage of mother Hamsa Venkat and Guru Chidambaram R Suresh. Endowed with divine blessings, there is little doubt that dancing not only defines her personality, but is more importantly the language of her soul.
For Hamsa, dance is a passion to be practiced from one’s innermost being. To do so, one has to master technique first and as one moves on to the stage, one has to transcend technique and enter the spirit of the dance wholeheartedly. Only then can the dancer be one with the audience and themselves, she believes.
Wholeheartedly imbibing this philosophy, Vishakha surrendered herself to the sublime art form.
The superbly choreographed recital presented a unique artistic conversation between guru and shishya as well as Vishakha’s own body and soul, capturing the hearts and imagination of audience in the process. Like a pilgrimage to the temple of one’s ishta devatha, it was a deeply fulfilling journey into sacred space.

Quite like a majestic temple, the alluring grandeur of the opening pieces eventually made way for a spiritually uplifting experience. Entrenched in metaphor, each piece was executed with clinical perfection, much to the delight of her Guru and her parents.
Displaying stamina and maturity well beyond her years, anga sudham, or clarity of nuances, was the highlight of the carefully structured performance, with rhythmic imagination adding depth and diversity.
The delightful puppets Laasya and Thaandav (Divya Sriram, Govinda Pillai and a volunteer team) hosted the evening, offering interesting insights as well as comic relief, with Singapore-based vocalist Sai Vigneshwar, violinist Balaji Jagannadhan, flautist Venkatesh Sritharan and mrudangam artist Pallavarajan Nagendran providing orchestral support.
Paying obeisance to guardian of eight sacred directions, Vishakha commenced her recital with Pushpanjali and Chathusra Alarippu, at first using only her eyes and then her limbs to traverse the journey between heaven and earth.

Evoking pure unrestrained joy, the Jathiswaram set to Ragamalika in Sankeerna Chappu thaalam, explored complex rhythms with complete confidence.
What followed was poetry of praise in Shabdam, Thandai Muzhunga, Salangai Kulunga (another ragamalika set to Mishra Chapu) on the divine grace of Lord Muruga.
The showpiece of the evening, a dedication to Ganesha, was undoubtedly the Varnam. Incorporating interesting jathis, Vishakha portrayed the rare but revered Tamil poetess Avvaiyaar as well as much-loved story of the elephant-headed God in some detail. The instrumental backdrop, contrasting tempo as well clever nattuvangam (Chidambaram R Suresh) interpolations offered Vishakha ample opportunity to demonstrate her skill.
Impeccable coordination, nimble footwork and perfect postures were some stand out features of this demanding piece, while always keeping the lines straight, as well as the angles curved at elbow and knee. Testing not just her stamina, but also her mastery over the intricate art form, the young danseuse certainly commanded the respect and admiration of the audience.
Having successfully proven her technical proficiency, it was now time to delve into realm of pure emotion. Simultaneously, the audience was also led towards the inner sanctum for a realisation of self.

The immortal Meera Bhajan, Pag Ghungroo, choreographed by bhava exponent Bragha Bessel, allowed Vishakha to explore the sheer expanse of emotive palette. The vish ka pyala served as an enduring metaphor of unquestioning love. Keerthanam (ode to dance) celebrated Shiva’s Ananda Thaandavam, reflecting the eternal paradox of the music of silence.
The ensuing Padham plumbed the depths of her inner feelings with the age appropriate and deeply self-reflective Gummana Kara.
The finale for the challenging repertoire was the Thillana in Ragamalika, a composition of Dandayuthapani Pillai, where the young dancer had elaborate rhythmic conversations with mridangist and nattuvanaar, once again demonstrating technical virtuosity and complexity of footwork.
Four hours had flown by, yet Vishakha was fresh as a newly blossomed lotus, ready to delight with her dazzling brilliance. The evening concluded with a flourish amidst chanting of Shanti and Devi mantram to thunderous applause.

“Vishakha started her first steps with me at the age of four and was always a very keen and talented child, focussed on her learning. She could learn steps and techniques so quickly,” said Guru Suresh lavishing praise, while his wife Shobana added that it was “a remarkable achievement for one so young to execute pieces of such complexity with so much ease”.
“When I went on stage, I forgot everything and everybody and felt so happy and didn’t want to stop,” Vishakha said after the arangetram.
Like the meandering river that embraces the ocean, Vishakha’s quest has only just begun as she seeks to discover its magnitude and its very depths.