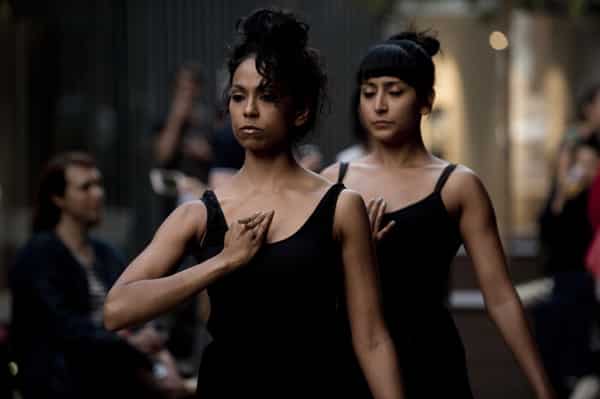 Conceptualised by Melbourne-based dancer and academic Dr Priya Srinivasan, this was an intense but meditative collaboration between Indigenous and Indian female artists.

Serpent Dreaming Women wove together the artists’ biographies, autobiographies, traditional stories and texts, across rooms and environments. It employed a variety of contemporary storytelling and dance choreographies, as well as traditional performance modes.
In a panel discussion afterwards, all the women spoke of the surprising connections they had discovered between Indigenous Australian and Indian cultures, in language, mythology and the impacts of colonisation.

Shown into the “Hyper Fragility Boardroom”, we sat at a long table while Candy Bowers and Victoria Chiu took us on a journey of dark, intersectional feminist comedy and questioning of whiteness, colonialism, and nationalism.

Theatrical, with lightening costume changes, sharp choreography, and using sound, light, and audio-visuals, Hyper Fragility made me want to cry, relate-rage, and laugh uproariously at the same time.
I was especially moved by Bowers’ fragile, tortured rendering of ‘Jack the Colonial Boy’ in a white petticoat that showed her naked body underneath, shaking and panting, evoking the misery, helplessness and forced sexuality of the female colonised.

Chiu’s prowess as a choreographer matched Bowers’ comedic style perfectly, and the conclusion, with Bowers and Chiu cavorting gleefully on the table in wife-beaters, sunhats and ocker accents, shaking and throwing back beers, left us dazed, excited, with more questions than answers. Just as the artists intended.

An intimate showcase at The National Institute of Dramatic Arts’ studios in Southbank, two of ‘Resonant Lines’ performances were especially moving: ‘Tincture’ by Aarti Jadu and ‘Syllables of Ritual’ by Nithya Iyer, Luna Mrozik-Gawler & Devika Bilimoria.

Jadu’s ‘Tincture’ was a beautiful wash of invocation to daily sounds, combining Western harmonics and violin with a Hindu prayer to the goddess, layered over with the sound of tea-making and dishwashing. It felt like a complete world of sound, and was the kind of intercultural ‘fusion’ that needed no explanation or indeed showed any ‘seams’ between the different music forms.

‘Syllables of Ritual’ was a mesmerising movement and spoken word piece with a musical backdrop, exploring the connection, contradiction, and complications of cultural heritage and inherited forms of worship, and the performers’ contemporary longings for and rebellions against both. The spoken poetry was laden with rich images of past and present, while the repetitive, meditative steps were hypnotic. The performers’ interruptions of each other’s poetry with humorous, natural discussion, was an interesting way to combine performance and analysis within the same piece.
Photos by Damian W Vincenzi