Place of origins, space of invitation 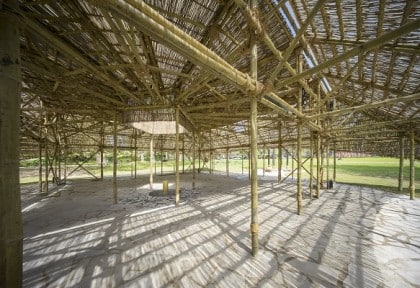 In conversation with Peter Maddison and Naomi Milgrom, Bijoy Jain, leading exponent of sustainable and ethical architecture and design, and designer of Melbourne’s third MPavilion, points out that a hundred years ago, the modern concept of ‘architect’ didn’t exist.
In London, after he left the US, where in 1990 he had received his M.Arch from Washington University in St Louis, USA, and worked for some time in Los Angeles on the Getty Centre, he thought more about this.


“I’d remember making this whole series of big, thick dockets of drawings. And I remember being at the construction site… and where I was building, they were unable to read the drawings.”
He now sees the capacity to make things as “quite visceral”; at his award-winning firm Studio Mumbai, which he founded in Mumbai in 1995, he has carpenters and masons that claim lineages of 10 or 20 generations. He takes that “with a pinch of salt”, but reflects, “that’s the sense of continuity that exists, so it’s in their DNA or blood.” Their knowledge is not so much technical as knowledge “embedded in stories, and observations that each of them specifically experienced”.
In India, he highlights, more than 50% of the built landscape is not created by architects.

“So there’s a great sense of self-reliance because there’s an immediacy, and also the technology doesn’t exist, and for that matter electricity.”
In his work he uses local materials, labour and expertise, and draws from traditional skills and building techniques.
Naomi Milgrom, founder of MPavilion – a unique yearly architectural and design project that commissions a leading international architect to build a temporary pavilion in Queen Victoria Gardens – found Jain’s approach the right fit for the project. “Particularly in the collaborative way that he does everything, I think that really resonated with what we are doing with the MPavilion.”

She started MPavilion with support from the City of Melbourne and the State Government after being inspired by the Serpentine Pavilion in Kensington Gardens, London and wanting to implement the idea in Melbourne.
“We like to think of Melbourne as the cultural capital, the fashion capital, the sport capital… so I thought there was a way to make Melbourne the design and architecture capital of Australia. Because every good city needs to be differentiated.”
What also drew her to Jain’s work was the emotional connectivity he brought to his ideas about the building, the landscape around it, and the people using it.

“My first brief to an architect is ‘please don’t give me a building, give me an emotion’; that has always been extremely important to me.”
Jain’s design for the MPavilion is based on the Hindu mandapa, a liminal structure that leads to the main temple.
“What it does is serve to contain something that is sacred… the structure is more a container and a shelter [that] enables people to come and visit and participate.”
Indeed, the idea behind MPavilion is invitation. Each year, from October to February, it becomes a “cultural meeting place”, a space embracing diverse events, performances and talks, all free to the public.

In his design, Jain has also incorporated a tazia, a replica of the tomb of Hussein, carried in procession during the month of Muharram (the first month of the Islamic calendar).
A square-and-dome structure, Jain sees it as representing the earth and sky, and thus “something that’s universal.” In his design it becomes a ceremonial gateway, an invitation.
Jain has also described the site of MPavilion as a “non-place”, reflecting on how it embodies the disconnect between the present and the past.
“In time, what has occurred with this particular piece of land, [is that] a displacement that takes place… economic growth, colonisation, gold rush… [all become] part of the park, but also in some sense isolated from the park. What if one connects back, just physically, to that origin?”

In keeping with the idea of origins and universality, the structure of Jain’s MPavilion – assembled in Mumbai – uses bamboo.
Rudimentary and universal, affordable and ubiquitous, bamboo is used everywhere in India: in enclosures for festivals, for temporary movie theatres, and also by the indigenous people of the forest for their homes.
Jain compares the bamboo structure of the Pavilion to the bones of the human body: “a skeleton or scaffolding on which you then enable other things to be activated.”
This year’s MPavilion features a 400-event program over the next 4 months, with up to 300 participants. Entry and all programmed events at MPavilion are free.  Visit mpavilion.org
Images courtesy of Nicholas Watt and John Gollings
- Advertisement -
Share
WhatsApp
Facebook
Twitter
Linkedin
Previous articleAnatomy of an arangetram
Next articleNo strings attached