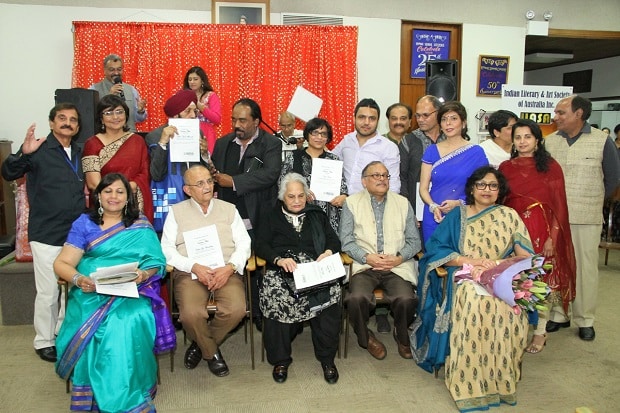 September 14 marks the date when we celebrate India’s national language Hindi, as Hindi Divas or Hindi Day. It was on this day in 1949 that the Constituent Assembly of India adopted Hindi as the official language of the country.
Lovers of Hindi in Sydney’s Indian community mark the event in their own way every year, but one event has been gaining in popularity in recent times. The Indian Literary & Art Society of Australia Inc. (ILASA) organises a kavi sammelan (poets conference) that attracts many established, as well as budding poets in the community. Launched by Rekha Rajvanshi, herself a well-known writer, poet, playwright and teacher of Hindi, the event has gone on to become the hallmark of Hindi Divas celebrations here.
This year, ILASA put together a joint poetry and music evening, Kavi Ke Udgar, Sangeet Ki Jhankar, with a romance theme.
Held at the Epping Leisure and Learning Centre, it gave many the opportunity to express their opinions on various issues by way of poetry, while being regaled by some of the Hindi language’s best known songs from Bollywood. The 200-odd audience, set with cups of chai (the kavi’s favourite drink?), sat around, some in mehfil style, as each presenter took centrestage.
Gaurav Kapoor hit the ground running with his sensitive piece on women’s empowerment, safety and liberation, issues that have plagued the nation in recent months and left us aghast.
Dr Nihar Agar then presented his poem Tum janmey meri dharti par, padh likh kar yogya baney ho tum about Mother India and her words of hope for us all Indians.
Lotey mein kuch neer bhara hai… such were the words of Garima Trivedi who won hearts at the kavi sammelan with her immaculate command over shuddh Hindi.
Mera romance, a poem about India from before Independence to current times, was presented by Jasbir Ahluwalia, followed by Chahat mein basa lo to inayat ho poetry by Gurpreet Bahl. Ritu Bhamra, Sukhpreet and Sonu Sarda’s (Pyar dekha hai) romantic poems were a great contribution to the event and were appreciated by the audience.
Senior poet Vimla Luthra with her lovely poetry about Hindi language added grace to the occasion and other peers were blessed by her words.
Pradeep Upadhyay’s comedic piece about a poet sending his verses to an editor that get rejected, and resending the same verses on the name of a 16-year-old female was remarkable and made the audience burst with laughter. Although we’ve heard this one before at a previous ILASA kavi sammelan, it was fun to hear it again, even as it helped lighten the mood after some heavy pieces. Swati Tiwari’s humorous poems entertained just as much and were very welcome. Vijay Kumar Singh’s geet Jheena jheena uska anchal was beautiful.
Mention was made of festivals close to the time, such as Ganesh Chaturthi and the birth anniversary of Ramdhari Singh Dinkar, and quotes and poetry of great poets Prasad, Pant, Gulzar were read in between the events. Community elder Sant Ram Bajaj’s Book Gustakhi Maaf was also acknowledged and showcased at this occasion.
Rekha Rajvanshi as MC introduced each poet with a few lines and in the words of one of the poets present in the audience, in a wonderful gesture of peer-appreciation. Other MCs Iqtedar Abdi and Raj Rajpal Sandhu were innovative and carried off the evening with a good sense of humour and welcoming gestures to the poets.
The music came courtesy of Vinod Rajput and his team, Richa Srivastava, Lalit Mehra, Sunny Sharma, Arun Nanda, Reena Mehta, Lata Baraskar who entertained with classic and old Bollywood numbers with their fresh voices and live instrumental band.
Phool tumhe bheja hai khat mein, Jhooley pawan ke layi bahar, Masti bhara hai sama and Billo rani were amongst a few numbers presented that set for the audience just the right mood for the evening. Although the inclusion of Billo rani in the song-list was criticised by some as not being an appropriate number for this evening, the MCs clarified its literary origins coming from none other than the famous lyricist Javed Akhtar. Every piece of poetry deserves respect, it was pointed out, and can serve as entertainment.
Yet, it was the wonderful variety of poetry that won the day that day.
Here’s hoping that the kavi sammelan tradition continues to grow unabated.