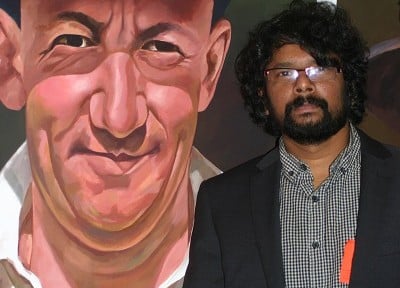 Surrounded by portraits of former Victorian Premiers, the recent ‘Pride of Australia’ exhibition was unlike any other painting exhibition held before in the lofty Queen’s Hall of the Victorian Parliament.
Melbourne artist Sedunath Prabhakar (aka Pradeep Prabhakar) captured Australian personalities on a single 50-metre canvas to create an extraordinary display.

The exhibition was held over two days and was jointly inaugurated by Colin Brooks, speaker of the Legislative Assembly and Bruce Atkinson, President of the Upper House.
Robin Scott, Minister for Multicultural Affairs, and Manika Jain, Consul General of India were among the many dignitaries that attended the event.
Sedunath, who migrated to Australia 8 years ago from Kerala in India, took 18 months to complete this ambitiously scaled project.
He selected 50 Australian greats from the years 1700 till date and created their likeness on canvas with acrylics. Each portrait took him 3-4 days and hours of focused effort to finish.

Despite the static and specific subjects of his portraits the overall body of work managed to depict a narrative of Australian history.
According to Sedunath, the driving idea behind this exhibition was to offer a tribute to the country that he has now grown to love.
“In Australia I have enjoyed complete freedom of expression,” he said. “I believe that Australia is an inclusive, multicultural society that offers good opportunities for the arts, culture and communities.”
Explaining his unusual choice of subject, he went on, “This work is my attempt to narrate Australian history through art and take Australians down memory lane so they can appreciate the contributions of their luminaries.”

Sir John Monash, Robert Menzies, Donald Bradman, Ian Thorpe, Emily Kame Kngwarreye and Steve Irwin are some of the Australians included in his eclectic mix.
“It took hours of research to select from so many inspiring Australian personalities so I chose ones that are considered to be leaders or pioneers in their field,” said Sedunath, as he explained the parameters he worked with in his creative process.
“For example, I chose Julia Gillard, as the first female Prime Minister of Australia and Cathy Freeman as the first Australian Aboriginal woman to win a gold in Olympics,” he said.

From trailblazers, to those who have left a legacy, Sedunath’s brush captures the essence of all the eminent Australians, giving plenty of reasons to visit this interesting exhibition.
Sedunath acquired his training and education from India’s prestigious Baroda School of Arts. He is a writer, painter, musician and teacher of classical Indian music. He has also published a book in his native language Malayalam titled Embryo (translated in English).
The creative artist is currently in the process of writing another book based on the inter-communal violence that took place during the 2002 riots in Gujarat, India.

He has been invited by the Indian Embassy of Oman to exhibit his new paintings at Fine Arts Society of Oman in November 2017.
Sedunath was delighted to share that the feedback to his labour of love has been very encouraging.
Besides the positive reviews from people, his subjects Cathy Freeman, Terri Irwin and Gotye have expressed their interest in the portraits and wish to meet him soon to see his work.
Talks are also underway to explore the possibility of taking his exhibition to the Parliament in Canberra.