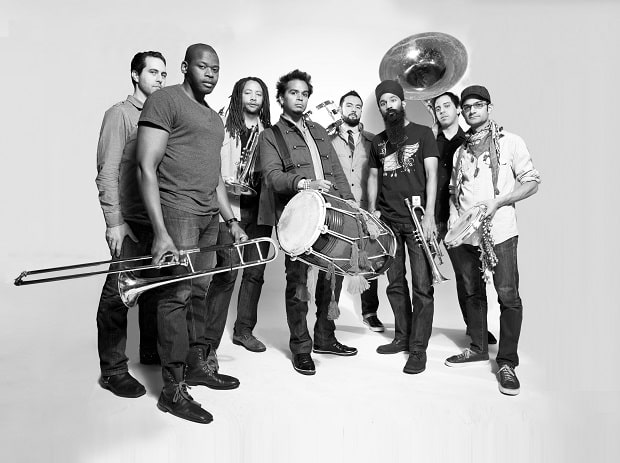 Sunny Jain is the founder and lead drummer of the band Red Baraat that was formed by him in October 2008. Indian Link spoke to Sunny recently, prior to the band’s Australian debut at WOMAD.

Since the tender age of 10, Sunny had been training to be a jazz drummer, but as a first generation Indian American he grew up listening to Indian music.

“I began studying Indian percussion instruments like the tabla and the dhol, and about 15 years ago I found that I had transitioned into a stage in my life where I wanted to play the dhol more than the jazz drums,” Sunny explained to Indian Link. “I did not want to start a rock band, I simply wanted to embrace both my American and Indian roots”.

So how did Red Baarat finally come into being? “When trying to find and bring together what would become the eight members of the band, I was looking for musicians with the right musical sensibilities who came from various backgrounds, not only jazz or south Asian artists”, he says. And since its conception, the band has enjoyed much acclaim and has played all over the world. They have recently just finished recording their third studio album which is a few months away from release.

So how does one describe the unique sound that is Red Baraat?

“It’s hard to summarise our music into just one genre”, admits Sunny. “It has its roots in the Indian brass band tradition along with Punjabi dhol folk rhythms, but it is also very much an expression of Brooklyn. New York City is a melting pot of musicians from diverse backgrounds playing and exploring all kinds of music and sounds. As a jazz musician, I was able to open myself up and absorb everything and anything I could find and this helped me express myself on my instruments and developed my ability to connect with other musicians”, he adds. Red Baraat’s music comes together because everyone in the band is open to experimenting and having a conversation with sound.

The audience attending the band’s performances also reflects the variety of influences and backgrounds that are combined in Red Baraat’s music.

“Even with such a diverse audience, usually everyone enjoys the music”, he states enthusiastically. “From South Asians to those of Pakistan, Bangladesh or Indian origin, to first or second generation Americans, the audience takes to the music really well because they can hear and understand the Indian elements like the dhol, but the other elements like the jazz and funk are what gives the music an interesting twist which they really enjoy”, says Sunny.

And how do they create such inimitable sounds? “The whole band is involved,” admits Sunny. “Each person brings their sounds to the table and the whole band experiments with the ideas both in rehearsal and onstage, to see how they’re taken. The majority of the time I believe the ideas stick, and only about 10% of the time do the songs not work”.

According to him, everyone has a different process and that’s great because the band allows for a lot of expression between each member. “For the most part it all happens organically and allows everyone to have some expression and add their own identity into the music and that’s what allows it to really just breath and work”, he adds.

Red Baraat has performed at large and high profile events such as at the White House, a TED conference at Google’s Headquarters in California, and at the 2012 Paralympic Games closing ceremony. “Performing at such events is an amazing, almost surreal experience, especially when some of the world’s most creative minds are enjoying the music,” says Sunny. “However, every venue offers something interesting and new, the band also finds it equally exciting to play in front of a huge festival or even in smaller club spaces from anywhere between 20 to 2,000 people”.

Unfortunately the band has not yet played in south Asia mostly due to complications with tour dates, but he is very keen on going to the region to see how Red Baarat and its music will be received. “What is most important to Red Baraat is playing with passion and being in the moment no matter where they are, so that they and the audience can have a blast!” claims Sunny.

So what’s next for Red Baraat? “We definitely want to keep doing what we are doing. We enjoy touring and keep planning to tour, but we would love to get into composing and scoring for films or collaborating with other major artists and being able to expand ourselves and our creative process”, reveals Sunny.

And what does the band have for WOMAD? “At WOMAD you can expect some of the band’s new stuff and some exciting improvisational work, but mostly Red Baraat plans to do what it does best – build up a lot of energy with the audience and have a really fun time!” says Sunny.

Red Baraat’s unique sound and powerful energy will make the band a must see performance at WOMAD 2014.