One in three must end with me 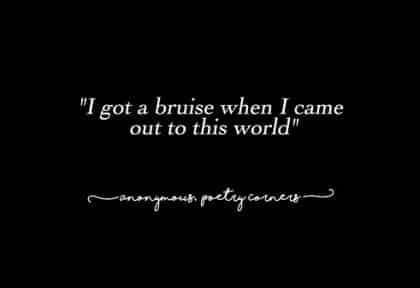 The dark screen lightens and reveals the sombre face of a very young girl with big, soulful eyes. She slowly looks downwards. The camera moves to focus on the string of pearls around her neck and the frilly edges of the top that gently hangs over her shoulder. You hear a dull, aching, rustling, like lonely waves crashing on a distant shore. You hear her voice, slow, stark and deliberate, as she looks straight at the camera and says:
People will tell you, ‘You should adjust’
They’ll mutter out loud ‘Put the family first’
Because many will judge and many will blame
The one in three with a story like me.
It’s one in three.
It’s one in three.
Twelve-year-old Brienna Fernando performs these moving lines from a poem about domestic violence titled ‘One in Three’.


Written by 22 women from Melbourne’s northern suburbs, ‘One in Three’ is a product of Poetry Corners, a print and digital art project designed and developed by social activist Nayana Bhandari and filmmaker Emma Macey-Storch. Passionate about the power of art to bring about social change, they brought women from diverse backgrounds together to write poetry. The poetry is showcased in a multi-lingual book titled One in Three, and the poem was filmed to be a digital art installation. Performers were recruited from within the writing group and the community, with sisters Brienna and Brivini the youngest performers, and 81-year-old Percy Mason the oldest.
The choice of performers of varying ages was a deliberate one.
“I wanted to shift the stereotypes,” says Emma Macey-Storch, founder of Some Kind of Squirrel productions, a not-for-profit filmmaking company, whose work with underprivileged children in the UK won her 23 international awards.

“I wanted a 10-year-old girl to tell the story of a 60-year-old woman, and an 81-year-old man to tell the story of a 20-year-old woman to challenge perceptions of the issue,” Macey-Storch says. “When you hear an 81-year-old man saying ‘On my wedding day’, or ‘The pressure of patriarchy’, the results are mind-blowing.”
The chosen art form too, was deliberate.
Nayana Bhandari, founder of the Oorja Foundation, started writing poetry at the age of 16.
“Khoob ladi mardani, woh toh Jhansi wali rani thi,” she says joyously when asked what inspired her, quoting the iconic poem by Subhadra Kumari Chauhan.
After performing at her first spoken word event in Melbourne, she felt empowered and realised that poetry could be a powerful tool in community engagement and preventing violence. She approached Emma and Poetry Corners was born.
Funded by the Victorian Government’s Community Crime Prevention Program in association with the Northern Community Legal Centre and Prime Star, Poetry Corners brought women from Indian, Pakistani, Sri Lankan, Somali, Anglo and other backgrounds together for three days of poetry workshops. The process was transformational for some.

“Mere dekhne aur sochne ka nazariya badal gaya hai,” (It has changed my views and perspective on domestic violence) says Gurpreet Kaur.
Others enjoyed the cross-cultural engagement. Debbie Anscombe found the process of engaging with women from different cultures, some of whom she didn’t even share a common language with, “fantastic”.
Fauzia Elahi, another writer and performer echoed similar sentiments. “Oh God,” she exclaims exuberantly, describing when she heard a woman with a Somali background talking about her experiences at Poetry Corners. “She has seen different places, smells different flowers and eats different food, but her experiences are the same as mine. It made me feel united in our diversity. It is empowering.”

For the filming, the performers were coached by professionals.
“I have been so inspired, moved and touched by these courageous women and their stories,” said performer Kattimoni Beames. “It’s made me realise how important it is that we bring these issues out of the dark.”
Spoken word and performance artist Sukhjit Kaur Khalsa was amazed.

“Getting 22 women together to create something so real, authentic and powerful…that’s why I fell in love with this project and that’s why I believe in it.”
Emma shares that sense of amazement. “What blew me away is how simply the addition of a creative activity sparks just the most raw, the most personal and intimate type of reaction,” she says.
Nayana hopes that Poetry Corners will create a ripple effect. “Each participant is an ambassador. When they see themselves in the video, and see their work in the book, they will be inspired to create change.”
Reading the poem, that change may have already begun.
Let’s challenge what’s wrong
Let’s make our sisters strong
Let’s challenge our brothers
And make them understand
If we want to change the story
They have to take a stand
For every woman and child
In their community
Because it’s one in three
It’s one in three
And this epidemic of violence
Has to end with me
One in Three runs from 9 February – 2 April, 2017 at Gee Lee-Wik Doleen Gallery, Hume Global Learning Centre, 75-95 Central Park Avenue, Craigieburn. The book will be launched on 8 March, International Women’s Day.
Photos: Some Kind of Squirrel Productions
- Advertisement -
Share
WhatsApp
Facebook
Twitter
Linkedin
Previous articleStrength in diversity
Next articleUnion Budget 2017