Of love and loss 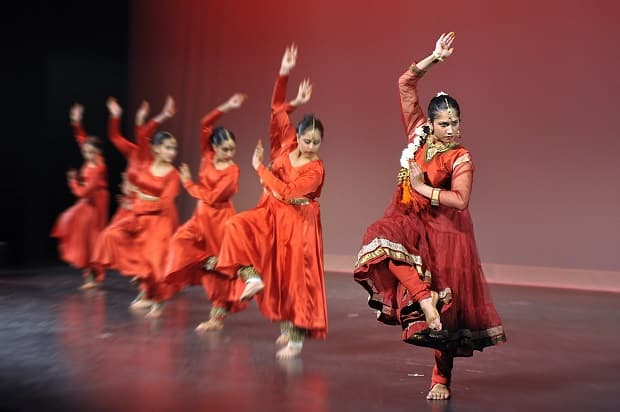 There is perhaps no human that lives that hasn’t experienced the emotions of love and loss.
The story of Devdas has intrigued artists through time and it is indeed a challenge to present something that every single human can relate to but at the same time something where each human experience may be different. This is precisely what attracted Ruchi Sanghi to the story of Devdas. Ruchi, who helms the premier Kathak outfit in Sydney, says, “I thought it would be a fascinating challenge as director and choreographer to present the already known characters in my own special way”.
And in her characteristically inimitable style, Ruchi accomplished this admirably in her latest production Devdas The Musical. In poignant moments such as when Dev gently clasps the anklet on to Paro’s feet on his return from London, or in the silent suffering of Chandramukhi facing rejection, the feelings of both love and loss were recreated simply beautifully.
The dancers stole the show with their synchronised movement, varying formations and graceful execution of different styles of dancing. Be it the peppy folk number celebrating Holi in colourful pinks and greens, or the dance of seduction in golden hues, or the dance of anger and passion in tones of red, or the dance of death and separation in streams of black – the mood of the moment was effectively captured.
In the intense portrayal of emotions – the enchanting altercation between little Paro and Devdas as they play with their friends, the arrogance of little Chadramukhi as she preens herself at her debut, the loud argument Devdas has with his mother highlighted by the clicking dandiya sticks in the background – the dancers excelled and truly lived their roles.
The cast Ila Srivastava, Ankita Bhatia, Anika Misra, Hirali Dhawan, Nicki Kathuria, Nikhil Anand, Rahul Patel, Divya Saksena, Pavithra Hathi, Divyansha Kumar, Jhanvi Rao, Bhavya Nanchahal and Pratyush, under the able guidance of Viral Hathi and the theatrical adaptation by Anu Shivram, brought to life the story and the characters.
The musicians contributed just as effectively. With a sense of mystery and magic, Aparna Nagashayana sang not merely the story of Devdas but the song of every human soul, its love, longing and loss. Sanjay Ramaswamy was vibrant with his resonant voice and through serene aalaps, crisp swaras and lilting lyrics, the singers not merely accompanied but breathed life and soul into the performance. Maharshi Raval (rhythm arrangement), Peter Schaefer (sitarist), Shaun Premnath (keyboard and orchestration), Suraj Ravikumar (rhythm pad) and Dhatri Bellave, Soumya Ravikumar, Tharunaya Nevada and Pranita Prasad on chorus embellished every movement and nuance with their skilful artistry.
Devdas being a period epic, it is complex to create the mood of a time and place beyond the present. The team of artists did this with panache led by Sagar Agashe as they effortlessly transported the audience to another world, one of courtesans and class distinction. The rich backdrops of hanging silk and tapestry, the dazzling costumes, the intricate jewellery, subtle touches like the swing of creepers which metaphorically reflected the mood of the characters representing their joy and sorrow, all added to weave its own special magic.
In their brief interludes, some ‘guests’ on stage impressed with their cameos. The flamenco dancers representing a scene where Devdas meets with the gypsies in his travels, were so full of life and got the audience’s feet tapping. Another moment that stands imprinted in the minds of the audience is the qawwali by two young boys Lalit and Mayank, with their powerful and gifted voices, who enveloped the audience with the mysticism and divinity of the Sufi traditions, appropriately accompanying the transformation of Chandramukhi from selfish to selfless in the foreground.
As the lyrics echoed at the climax of the musical, Shashwath bas sannate… meaning, ‘the only thing eternal is silence’, the visual treat that was Devdas The Musical, left the audience speechless.
- Advertisement -
Share
WhatsApp
Facebook
Twitter
Linkedin
Previous articleThe return of Air India
Next articleTony Abbott's India plan