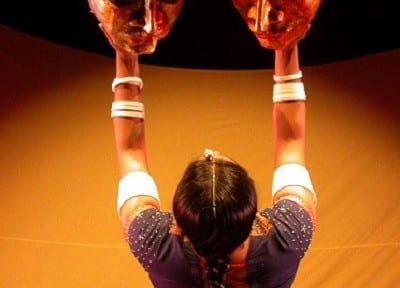 Gathering rave reviews from the audience, Transposition, by the Ishara Puppet Theatre, makes for an unpredictable, thought-provoking performance

Conveying an entire story with no dialogue or text, the play Transposition, by the Ishara Puppet Theatre Trust, was definitely out of the box. Using the language of gestures or isharaas, an interesting concept was created by this highly acclaimed production from India. Held at the Monash Drama Theatre recently, as part of the Confluence Festival of India in Australia, the show articulated the universality of desire.

Dadi Pudumjee, the artistic director of this show and the founder of the Ishara Puppet Theatre, combines influences and techniques from various parts of India and from around the world in his creations. He uses a diverse combination of puppets, actors, dancers, music, masks and narrative to create a unique artistic communication. Unlike the commonly used string, rod, shadow or glove puppets, Dadi’s creations are life size and life like.
Dadi’s concept of having archetypes as puppets and inner voice as dancers, made for interesting viewing. Torso puppet figures were strapped to each puppeteer’s body and they moved with the dancers creating an interesting fusion between illusion and reality. Their roles were switched often, however, so reading the synopsis in advance helped to understand the synthesis between puppets and people.

Transposition was a triangular love story with a Freudian twist that called for inner reflection. The original theme was extracted from the popular folk stories of Vikram and Betal. The version used in Transposition was based on author Rashna Imahsley’s book The Psychology of Love: Wisdom of Indian Mythology in collaboration with Thomas Mann’s work called Transposed Heads.
The musical scores were dramatic in parts, mellow in others, with poems and Sanskrit chants added to good effect. Sawan Dutta’s compositions complemented the dance and drama that unfolded on stage. Keshav Gogoi and Suhail Bhan impressed in their respective roles as the farmer with brawn and the priest with brains. Umang Gupta as the lead female artist was graceful in her movements and evocative with her expressions.

In a playful yet powerful depiction of human emotions, the massive puppet depicting the goddess Kali formed the most striking visual. In the conflict between mind and body, love and lust, the head ultimately ruled the heart; however, it was the journey to that point of self-realisation that captivated the audience. So did the eclectic mediums used for storytelling.
Manika Jain Consul of India in Melbourne offered post show felicitations to Dadi Pudumjee and his team. Prior to their show in Melbourne, the troupe had also performed in Canberra and Perth as part of the Confluence Festival. Dadi later remarked that he found the Monash Drama Theatre to be the best venue of all. Bownie points scored for his words, puppetry and isharaas.