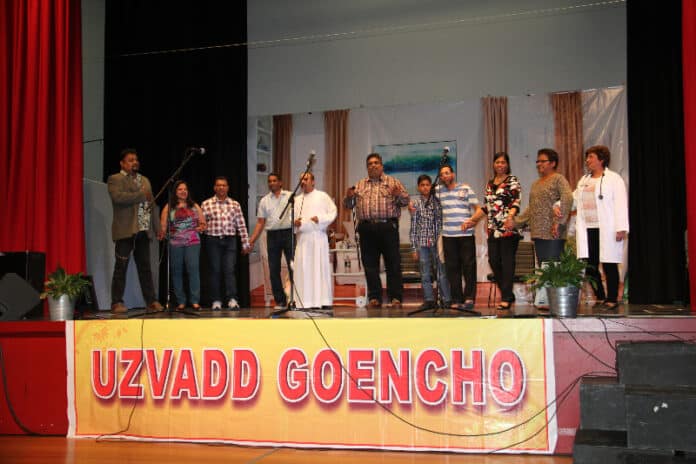 Reading Time: 2 minutesThe Goan community in Melbourne recently got a taste of a Konkani theatre thanks to elite theatre group Uzvadd Goencho

Director-producer-scriptwriter Nelson Dsouza was at the helm of affairs as the production ‘Bhogsonnem’ was staged at St Louis de Montfort Hall in Aspendale. The play, based on pride, prejudice and forgiveness, told the story of repentance and forgiveness.
The ensemble collectively performed five scenes peppered with songs and humour in good doses.
The leads Brian D’Souza, Annabel Hendrix, Alfy Martins, Gerard Lobo and Cathy Ferrao had the audience enthralled with their flawless performances . They were ably supported by the rest of the cast. Nelson, who played a multitude of characters, brought the house down with his comedy and the audience could not get enough of him. The surprise packet was first timer Gracy and little Jovan who captured hearts.
Johnny’s performance at each of the intervals set the rhythm and steadily raised the bar as the show progressed.
The music was composed by the renowned Josefat Vales who was unstoppable in his varied compositions.
The atmosphere was electric from the word go. Earlier in the evening, the event got underway with a magic show by Sanjay Fernandes, a well-known magician.
The show was followed by renditions from the very talented Irmao Goenkar band, a tie up of two talented musicians, Josephato Fernandes and Josephato Vales. Edwin Braganza was the compere for the evening.
The sumptuous and delicious buffet spread was catered by Silver Platter and the evening was sponsored by Dorelli foods, MKS, TRU Spice, Carribean Market among others.
The audience loved every minute of the evening. There were cries for an encore andt the Uzvadd Goencho team has set a benchmark which will be a tough act to follow and match.
Uzvadd Goencho is a team of like minded individuals who aim at setting high standards in entertaining the Asian community. By combining old fashion values and new innovative ideas it aims in capturing people’s imaginations and leave lasting impressions. Moreover, the objective is to provide value-for-money entertainment with a message for harmony among the community.